EURO 2020: France vs Germany- 5 talking points from the match 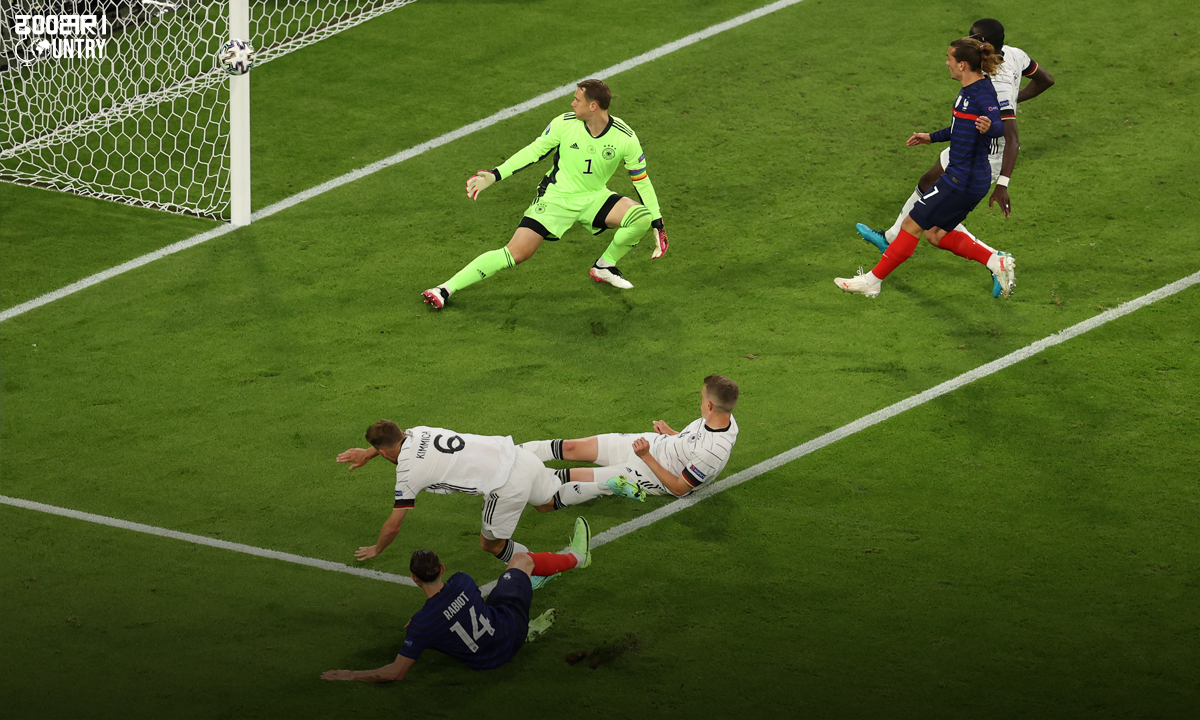 World champions France kicked off their EURO 2020 campaign with a narrow  1-0  win against Germany at the Allianz Arena here tonight. A Mats Hummels own goal separated the two sides at full-time as France go second in Group F. Football Monk comes up with the five talking points from the match.

A sedate start followed by the blunder

Germany kicked off, keeping hold of the ball while France maintained their shape cautiously. The first telling attack fell to the French as Paul Pogba headed over from an Antoine Griezmann corner. Kylian Mbappe too forced a save from Manuel Neuer, cutting in from the left. France got the breakthrough soon after as Mats Hummels inadvertently turned the ball into his own net off a Lucas Hernandez cross.

Paul Pogba showed his class throughout the opening half, retaining possession, retrieving balls, and moving forward. He pulled the strings in the midfield, releasing Mbappe and Griezmann often in forward marauding runs. It was his intricate through ball behind the German defense to find Lucas Hernandez that brought up the French breakthrough. Drawing fouls with his silky touches hindered Germany’s momentum going forward. Even in the second half, he allowed  Kroos and Gundogan no freedom, helping his side blunt the German attacks. Pogba was deservedly adjudged to be the “Star of the Match”.

Missed chances at both ends

The second half started off quietly as both teams tried to settle into the game but opened up all of a sudden. The French relied on fast counters as Adrien Rabiot raced onto a defense-splitting through ball from Mbappe, only to hit the woodwork. At the opposite end,  Gnabry spurned a gilt-edged opportunity as he sent a scuffed volley off target. The Germans gradually grew into the game, relying on the width provided by Gosens and Kimmich.

France approached the second half with a clear plan – let the opponent have the ball and rely on counter-attacks. They executed it perfectly with Lucas Hernandez keeping tabs on Kimmich throughout the game. The perfect positioning of Varane and Kimpembe left the aerial threat coming from Germany, neutralized. Their impact was so much that Lloris spent a relatively easy evening under the sticks. Germany was clearly left frustrated as the plan to work the ball behind the French fullbacks was clearly not working.

Agony of offsides and nervous wait

Towards the middle of the second half, France broke forward after weathering the German storm for a long. A delicate Pogba pass found Mbappe who twisted and turned in the box before curling the ball low into the far bottom corner. However, the goal was disallowed as Mbappe was marginally offside in the build-up. German boss Joachim Low brought on fresh attacking outlets in Sane and Werner to provide steam going forward.

Mbappe caused all sorts of troubles on the other end though, as a timely Hummels interception prevented a sure goal. With about five minutes remaining, the lightning-paced Kylian was adjudged offside again as Benzema’s goal was ruled out. Stoppage time worth over six minutes was played but the French maintained their shape resolutely to see off the game.