Sunil Chhetri: “We want to keep the ball and be a bit brave” 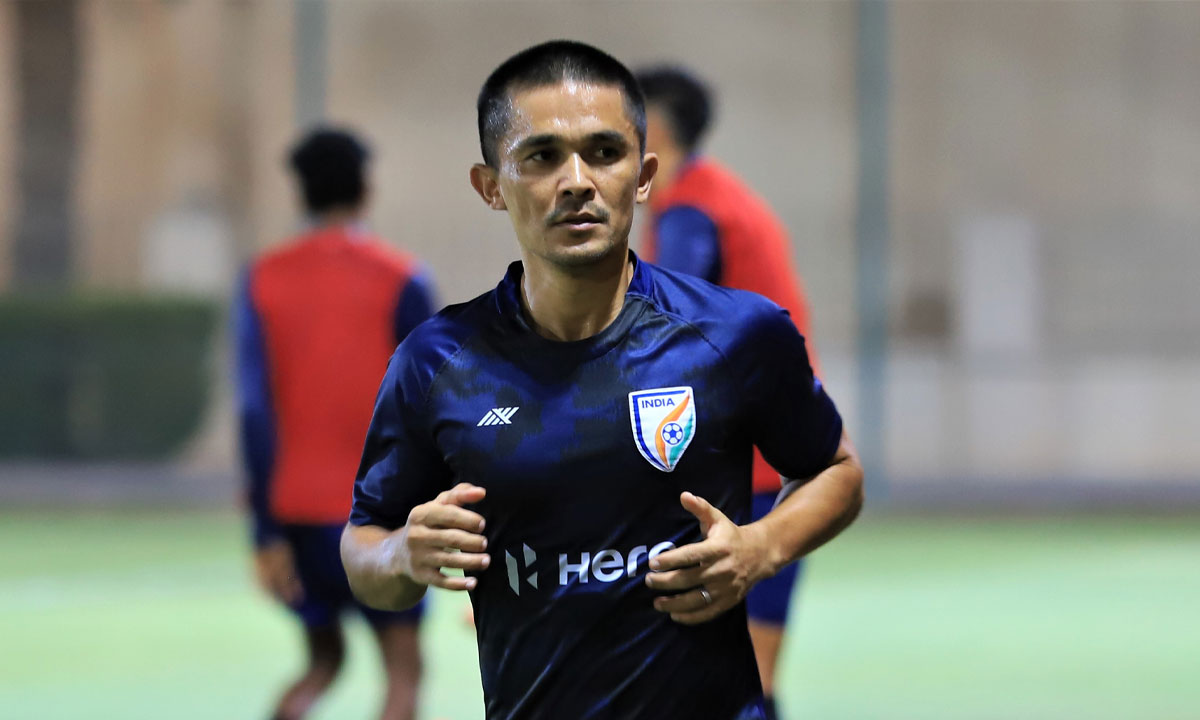 After a winning brace against Bangladesh and leading India to a comfortable position in the Asian Cup qualifiers table Indian Football team captain Sunil Chhetri seemed quite confident and optimistic with his new bunch of Young Blue tigers. The Captain Leader Legend got up close in as he shared his thoughts on the upcoming game his future at the National team and many more. The Football Monk excerpts.

Sunil’s take on the comparisons with Messi

Chhetri overtook Lionel Messi on Monday to become the second-highest active goalscorer in international football. He opened up on the comparisons with the Argentine stalwart, “There’s no comparison between me and Messi. There are thousands of players better than me”. He added, “I’m proud that I’ve played 100 games for India and scored 70+ goals.”

Quizzed about the majors that a striker should focus on. Chhetri opined that the necessities to perform well as a striker involves staying fit and playing consistently. He believes, “Giving the forwards more game time and focussing on fitness are the two mantras to be a better striker”. He further went on to say, “I hope the new ISL regulations will help in that process.”

Chhetri on his fitness abilities

Chhetri showed his abilities once again when it mattered most on Monday as he scored twice late on. His planned run into the box for the headed goal and positioning for the second goal was impeccable. These show his careful reading of the game even at the twilight of his career. Sunil remarked on his fitness,” You can tell me a bad player and a bad striker. But you can’t raise questions about my fitness as I take it very seriously. The day I’ll fail in that I will quit.”

When asked about his goals with India before he hangs his boots, he replied, “For now I want to win against Afghanistan in the coming ten days and want to think about Bengaluru FC in AFC Cup. That’s the little I can think of. I’m not thinking of hanging the boots soon and I really can’t think more than that.”

The Blue Tigers made their own life difficult in the match against Qatar when they simply sat back and defended. There was hardly any fluidity in the midfield or anything on offer in the final third. Containing such lethal attacks for the entirety of the game is a mammoth task.

Chhetri put forward his view regarding the same. The captain said, “The only issue is you need training. I want to see the team pass more”. He further said, ” It’ll take some time. We’ve got a lot of players who are comfortable on the ball, for example, Brandon is really good. I myself like to play more with the ball”

Quizzed about his thought ahead of the match against Afghanistan, Chhetri gave insights into their philosophy. He said, “We want to keep the ball and be a bit brave and make an organized move”.

On their post-match refreshments in Doha

The Indian team is currently working their socks off to ensure a passage into Asian Cup qualifiers in September. With the 2-0 win against Bangladesh, they’re currently well-placed to make the cut.

During the media interaction, the Indian captain opened up on their dressing room scenes. Chhetri said, “We now have pre-planned cheat meals at the camp. Gurpreet, Sandesh, and the other boys plan it like we win the game and then have some cake cause we didn’t have this and that for the last two-and-half months”.

He further said, ” earlier it used to be me keeping an eye on everyone so that none of the boys touched the cakes and all before the game. But now the boys are rightly motivated and take care of themselves” before he signed off.