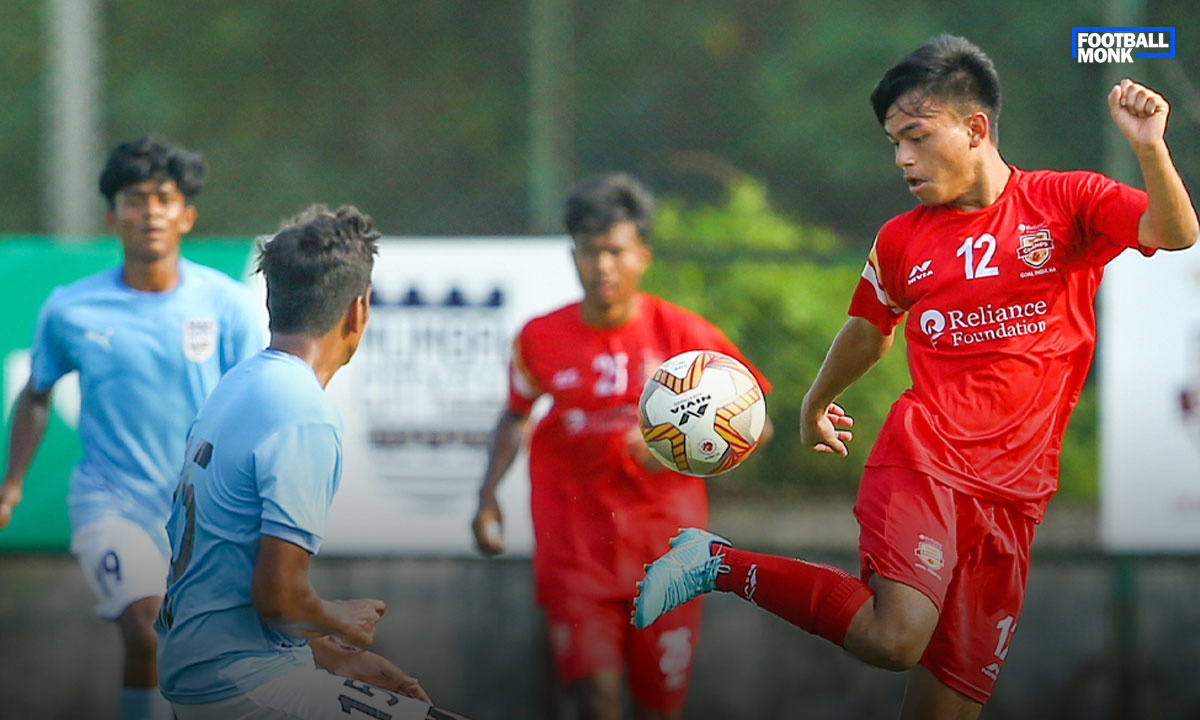 Goals from Gulab Himbahadur (7th) and Rashid CK (45th) ensured the youngest team in the competition registered their first victory after showing considerable progress in their opening two matches.

Former India international and head coach Arata Izumi’s boys were on the offensive from the get-go, pressing Mumbai, with an average age group of 20, higher up the pitch and posing a threat more often than not.

READ | “I will try to score hattrick in the next game”, says Fardin after Santosh Trophy heroics

It took the colts in red seven minutes to nod ahead, Surdas Meitei finding Sanan Mohammed with a lovely pass for the forward to cross for Himbahadur who volleyed home from close range.

Mumbai were guilty of not pulling the trigger in time, Aman CK shooting straight to the keeper from a good angle. But it was RF Young Champs, with an average age of 17, who kept Mumbai defenders on the tenterhooks, the excellent Sanan scooping an effort onto the crossbar before halftime.

Just before the break, RF Young Champs doubled their lead. Meitei got on the end of a great move to find Rashid with a deft cutback that Mumbai’s Kevin D’Souza should have dealt with. Rashid fired home first time to make it 2-0.

Chances were few and far between in the second period as Arata’s charges showed grit to hold on to their lead and seal the deal.

Earlier in the day, Kerala Blasters FC made it three wins in three games with a 1-0 win over Chennaiyin FC. Vincy Barretto scored in the 86th minute to rack up his second goal of the campaign.

For Chennaiyin, goalkeeper Devansh Dabas had a brilliant outing under the bar saving a penalty from Givson Singh in the 72nd minute.

Both teams took time to get into the groove, Kerala creating more chances than their counterparts who looked solid at the back. The boys in yellow were particularly threatening on the counter, Nihal Sudeesh and Sanjeev Stalin combining well. Chennaiyin bottled Barretto in the opening exchanges, the skillful forward not finding much joy down the left side before Sudeesh found him with a neat cross inside the box which Barretto headed over the bar close to the half-hour mark.

Skipper Ayush Adhikari conjured the best chance of the half, his effort from 25 yards cannoning off the crossbar. That was the start of some sustained pressure from Kerala, Stalin forcing Dabas into a good save after cutting in from the right. Just before the halftime whistle, Givson fired over the bar.

Chennaiyin were as resolute at the back as in the first half after the break in the face of a flurry of Kerala attacks, resulting into Mohammed Aimen being tripped inside the box by Dabas, who made amends with a good reflex save off Givson from the spot. Dabas made another good save from -Sudeesh before their wall was finally breached by Barretto who saw his effort also kept at bay by the brilliant Dabas. A good move started by Bijoy Varghese ended up with a botched clearance from Aneesh V, the ball falling to Barretto who cut in and drilled past the keeper and into the far post. In the end, his goal proved to be the difference as Kerala continued their dream run.