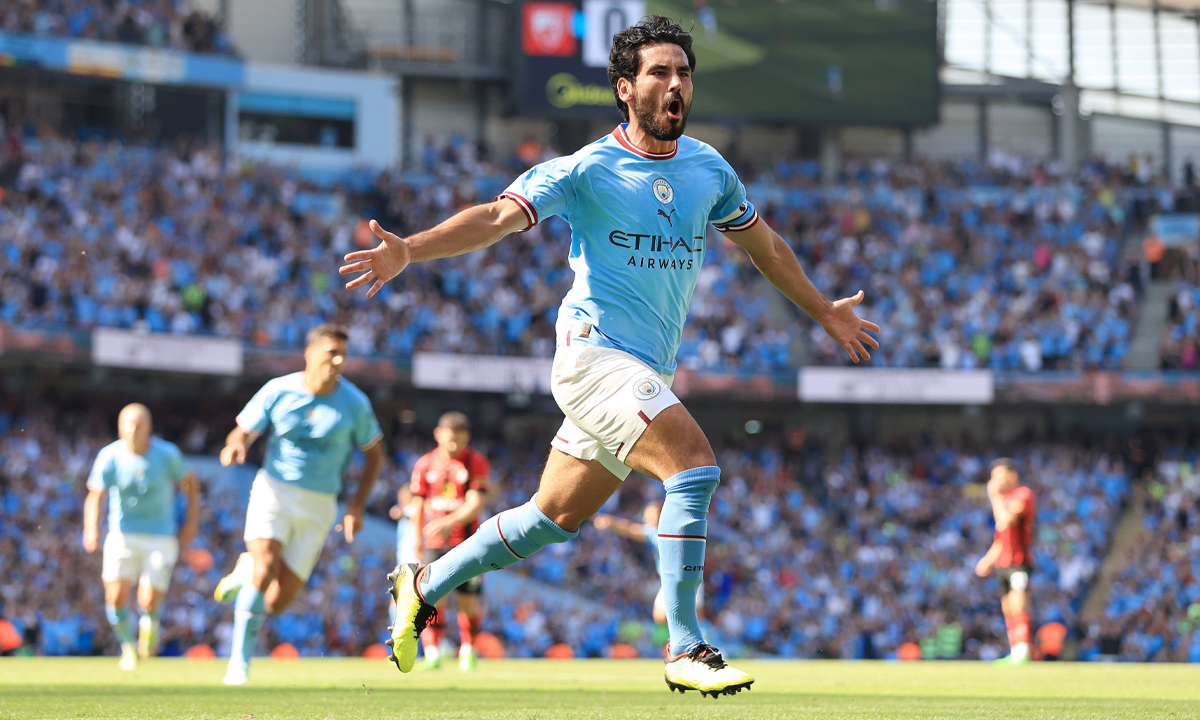 Manchester City continued our unbeaten start to the new Premier League season with a one-sided victory over Bournemouth.

Ilkay Gundogan scored his 50th goal for the Club, with Kevin De Bruyne and Phil Foden also on target before Jefferson Lerma turned into his own net as the defending champions ran out 4-0 winners in our first home game of the 2022/23 campaign.

City, who dominated the contest from start to finish, opened the scoring in the 17th minute when Gundogan exchanged passes with Erling Haaland and fired across Mark Travers into the bottom corner to finish off a slick passing move.

Bournemouth mustered a response through Ben Pearson, whose 20-yard snapshot forced Ederson into his only save of the game, but with Pep Guardiola’s side enjoying near-total control a second goal was inevitable.

It arrived just past the half-hour mark when Kevin De Bruyne bamboozled Lloyd Kelly with the drop of the shoulder and curled into the bottom corner with the outside of his right boot from 20-yards to complete an incisive counter-attack that punished the Cherries’ carelessness in possession.

It was a similar story for the third, as another loose pass allowed the hosts to break at pace, with De Bruyne turning provider with a perfectly timed pass for Phil Foden, who managed to beat Travers with a low drive that went straight at the goalkeeper.

There was further cause for celebration as Guardiola handed Rico Lewis his debut as an 81st-minute substitute for Kyle Walker, which saw the 17-year-old right-back become the fifth youngest debutant in the Club’s history.

This was a performance that had all the hallmarks of Guardiola’s City.
Control of possession, slick counter-attacks, and ruthless finishing, all of which combined to provide a result we have seen so many times at the Etihad – a dominant City win.

The defending champions were on the front foot from the first whistle, with Nathan Ake and Ruben Dias both heading wide before Foden and Riyad Mahrez forced Travers into saves.

Scott Parker’s men sat deep, giving City 67% of possession and we took full advantage to set up camp in the Cherries’ half for long periods.

And, with Haaland occupying the thoughts of the three centre-backs, it allowed City’s midfielders to flourish in the way they did last season when the absence of an out-and-out striker did little to halt our march towards a fourth title in five years.

It was a real team performance, highlighted by Kyle Walker initiating the move that saw Haaland hold off three defenders to turn the ball back into Gundogan’s path and the German made no mistake to reach a half-century of City goals with a composed angled drive.

Bournemouth was brave with their commitment to passing, but when their quality dropped for a moment, City was ruthless.

Rodrigo was alert to win the ball back in the build-up to our second, finding Foden, who released De Bruyne for a goal of the highest quality, and, when the visitors conceded possession again, Mahrez’s raking cross-field pass to the Belgian saw Guardiola’s men go from back to front in two passes.

It was vintage City and, whilst a more cautious approach after the break enabled Bournemouth to keep the score down, it might have been more.

Travers tipped Haaland’s looping effort over the bar and turned De Bruyne’s effort from a tight angle round the post, whilst the Norwegian miscued from eight yards after Grealish picked him out with a clever cutback.

This was a performance which had much to admire, and, having dominated our opening two games without conceding, City have certainly hit the ground running this season.

City top the table on goal difference ahead of our Arsenal after two wins from our opening two games.

This victory maintains our 100% record over Bournemouth in the Premier League, with our 11 victories from 11 games the best winning ratio in the competition’s history.