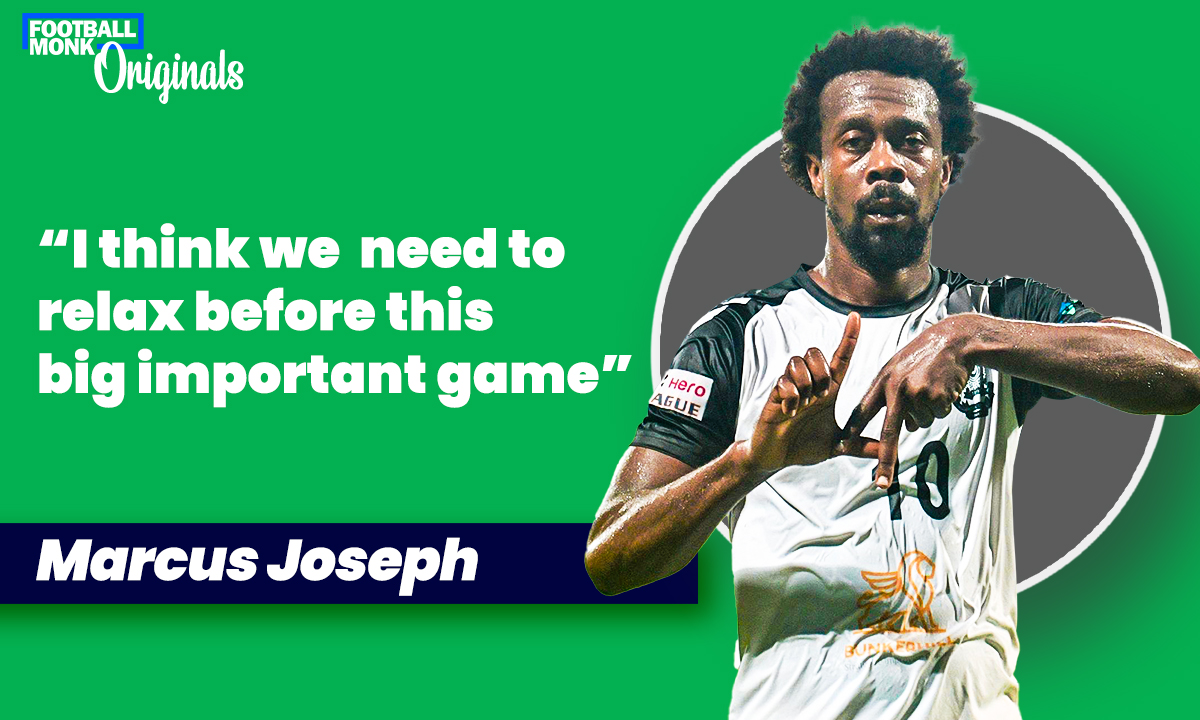 Mohammedan Sporting club hosts Gokulam Kerala in the virtual finale of the I-League on Saturday. Ahead of the mega clash, Football Monk got up close and personal with Mohammedan’s hitman Marcus Joseph.

Two days ago, almost the whole nation was convinced that the Malabarians will be able to successfully defend the title. However, the game of football is certainly very uncertain. Someone’s loss is someone’s gain and the current scenario perfectly defines this phrase.

Staying relaxed and focused is the key

This match could well arguably be referred the biggest league match in Mohammedan’s 131-year-old history. The Kolkata giants never came so close to winning a national top tier league. However, striker Marcus Joseph feels no pressure ahead of the vital encounter.

“This game is very important for the team and all of Mohammedan Sporting. But I think we all just need to relax“ said the striker.

“If we are too excited, we might commit some silly mistakes. Hence, we take this game like any other match,” the Trinidad man justified.

Ever since his move to India, Marcus has never shied away from scoring. The Mohammedan number ten is the highest goalscorer of the season so far.

Speaking about his goalscoring streak, he said, “It’s always a great pleasure to score goals. And to be a top goalscorer in a league makes you feel valuable.”

Marcus believes, “The team helped me to achieve this feat”

He further quoted, “They always kept compact and it wasn’t easy to break them down.”

Gokulam Kerala FC fell short to Shreenidhi in their last game. The Malabarians were hit with a sudden blow as this defeat ended their 21 matches unbeaten streak and also their 6 point lead at the top of the table.

Marcus Joseph spoke about how Mohammedan is preparing mentally for the game knowing that Gokulam too will come with all guns blazing.

“We don’t have any particular philosophy going into the game. We know they have dropped points and are preparing for us and having a great mindset.”

The striker feels this kind of a do-or-die match right at the end is good for the overall league as well, “It’s good for us and for football of I-League also to see a final like this.”

No love lost with my old team

Marcus Joseph first got the taste of Indian football with Gokulam Kerala FC. The Trinidad hitman was instrumental in bringing the first trophies to the team. His immense contributions helped the Malabarians clinch the Durand Cup. But, it’s all past now and Marcus now represents the Kolkata giants.

When quizzed about facing his old team in a match as big as this, he replied, “Gokulam fans still appreciate me. But this is how life is, you move on to different challenges. Sometimes you come to face your old team. I will continue to play my game and do what I need to do.”

We want our fans to back Mohammedan

The biggest advantage Mohammedan holds in their next game is their home support. The Kolkata giants boast a massive fanbase and their support will give the team an extra push believes Joseph.

“I want the fans to come out and give us their 100 per cent and always have our back,” he urged.

Joseph further opined, “This season was not very easy for us and we have tried our best to make you happy. So win loss or draw, please appreciate us“ before signing off.