Manvir Singh: I felt proud of myself after scoring in Derby 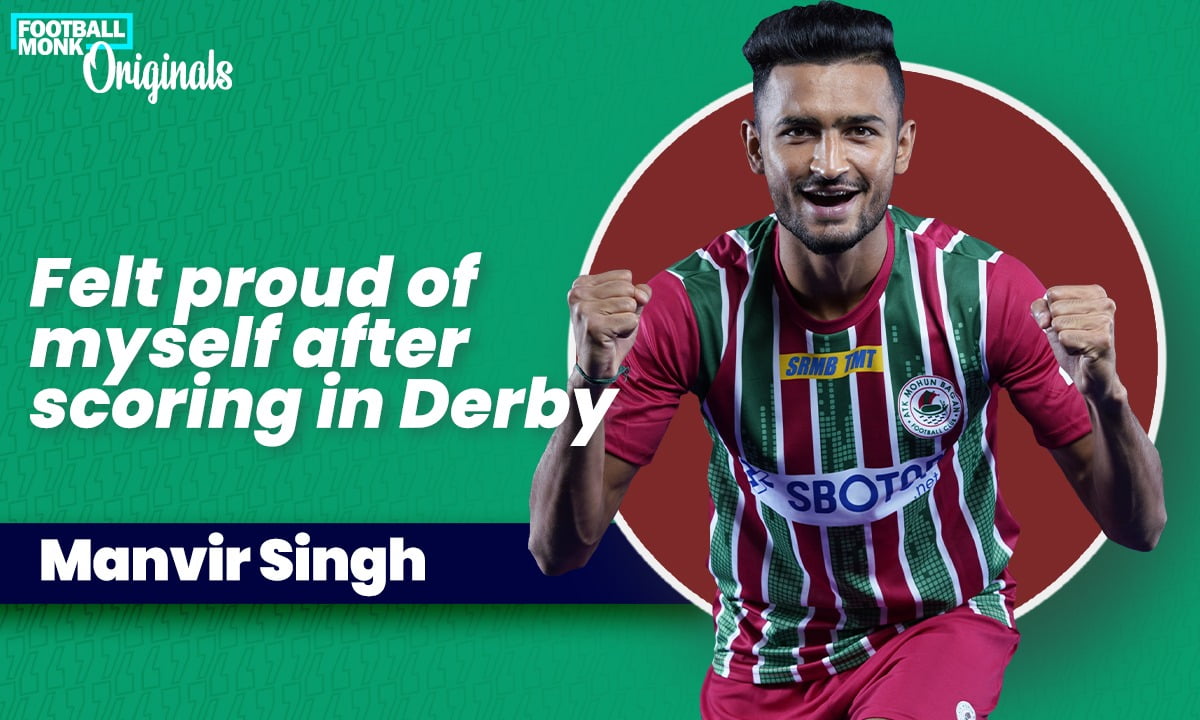 For many, Manvir Singh is the next big star of Indian football. After three seasons at FC Goa, he joined ATK Mohun Bagan in 2020 and his rise seems to have no limits. In an interview with Football Monk, Manvir Singh has shared his journey so far and much more.

When asked about his rapid rise to eminence, the forward said, “It was a wonder journey. I didn’t get regular game time at FC Goa, but I used have time here and there. It boosted my confidence. I realized the standards of ISL and how to perform. Then I signed for ATK Mohun Bagan and I grabbed that opportunity to give my 100%.”

While at FC Goa, Manvir Singh was already an emerging talent and a well-known figure in Indian football. He received offers from various franchises. He went on to explain why he chose the Kolkata giants for his next home. Interestingly, he had previously had a yearlong experience of playing with another Kolkata giant Mohammedan SC in 2016-17.

“Kolkata has always been a special place for football. Here, fans engage in huge numbers and they create a craze like no other place. Every player has aspirations to play in Kolkata. When I got an offer from ATK Mohun Bagan, I was delighted to go back to Kolkata,” he stated.

Though he was a talented player at Goa, Manvir’s game has reached new heights after joining ATK Mohun Bagan. While addressing this transition, he mentioned, “I didn’t get much opportunity at FC Goa. If someone comes in 80th minute, what can you expect from him in 10 minutes?”

“Later, I spent the pre-season at Minerva in Chandigarh. Pre-season was very satisfactory. That momentum continued throughout the whole season. It leveled up my confidence and performance. It helped me a lot.”

Kolkata Derby is undoubtedly the most anticipated event in an Indian football season. Manvir Singh came as a substitute in his first-ever Kolkata Derby and scored a fantastic goal with a solo run and a mesmerizing finish. He shared his memories about it saying, “I felt very proud of myself to score in my first Derby. It’s like a festival for the fans of ATK Mohun Bagan and SC East Bengal.”

“It feels great to perform in this match. I realized, if the start went well, the momentum will continue for the entire season. I came on and I scored.” Manvir was not wrong about the momentum as he went on to score six goals and two assists in the ISL season.

Advice for the Youth

As a hardworking player, he also gave some advice for the future generations. “Whatever practice or training is going on, do something extra. Hit the gym, do exercises, don’t waste your time,” he quoted.

As an upcoming star for the Indian national team, Manvir is often compared with Sunil Chhetri. While sharing his opinion about this comparison, he said, “I just have to do my hard work to establish myself. Replacing Chhetri is a huge thing, he is a legend. I don’t want to compare myself with him. I have to showcase my own performances.”