“We notice a lot of affection from India,” says Cádiz goalkeeper Jeremias Ledesma 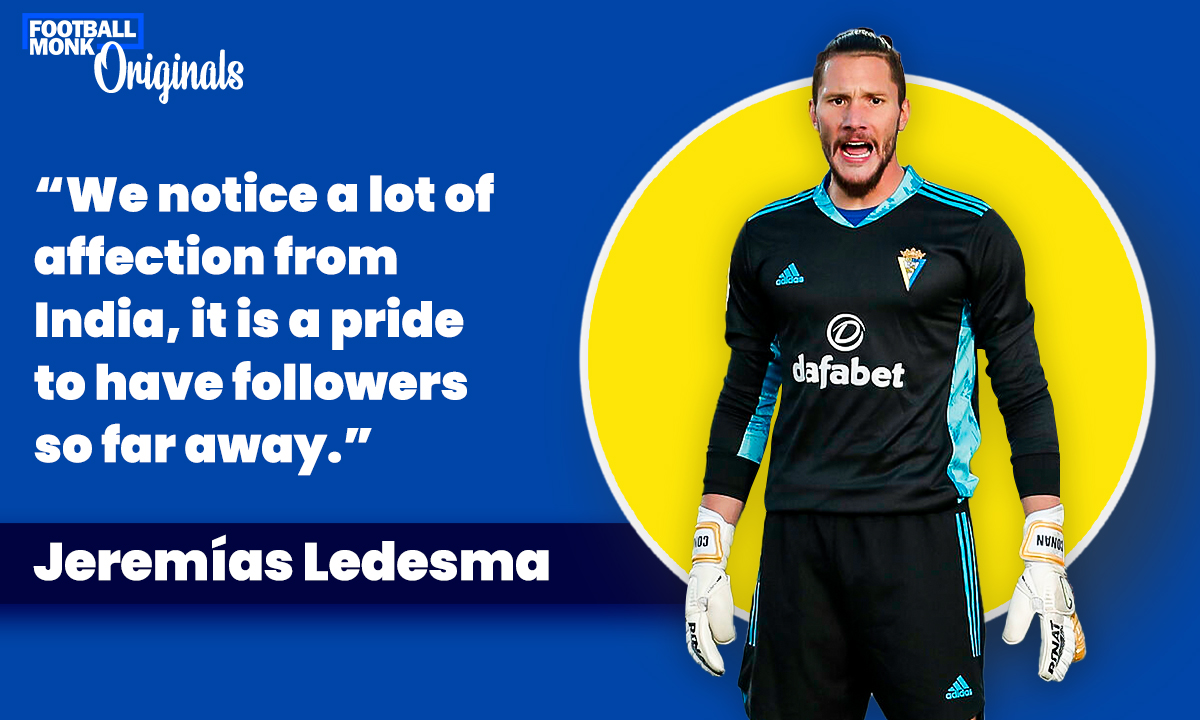 The new football season is around the corner, and fans worldwide are waiting for the start of the LaLiga. The Premier Spanish League enjoys much popularity in India, especially with its historic clubs FC Barcelona, Real, and Atletico Madrid. However, Cádiz CF stands out when engaging with the Indian audience.

Football Monk got up close and personal with the Los Piratas keeper Jeremías Ledesma for an exclusive interview, ahead of the start of the new LaLiga season.

Excellent start with the preseason

Speaking about the preseason so far, Ledesma commented, “I think we are doing a great job in this preseason, both physically and tactically. We are aware that we have a tough start to the league, with several very difficult games. That’s why we need to arrive at the first game at 100%.”

Cadiz narrowly avoided relegation last season, winning the must-win game against Alaves on the last matchday. The Argentine spoke, reflecting on the dramatic last season, “It was a difficult season. We knew we were going to suffer more than the previous season, but we didn’t know how much (hahahahahaha). Although the first leg was not good, in the second we showed that we deserved to be in LaLiga. It is also true that after having suffered so much, it is much more enjoyable. This year we must learn from our mistakes and start as well as possible.”

Ledesma has been a part of the Cadiz team for the last two years and has predominantly started the games in which he played. Being a part of the setup in LaLiga, he has pulled off some brilliant performances against mighty teams like Real Madrid and Barcelona. These include 3 wins as well as 4 clean sheets in just a span of 2 seasons.

When quizzed about what he feels about his own performances against the big teams, Jeremias replied, “The most important thing was that the team achieved good results. I simply did my job. It is true that against Real Madrid and Barcelona a good performance shines more and has much more repercussion, but I work to be at my best in every game.”

Plans for the upcoming season

Jeremias shared that the main objective for the team in the upcoming season will be to avoid relegation. Cadiz has been in the top-flight for two consecutive seasons, for the first time since 1993, and is raring to go into the 3rd season in LaLiga.

Speaking on the plans for the upcoming season, the Argentine said, “The team’s main objective is to stay in LaLiga. We are not looking beyond that. This is our third consecutive season in LaLiga and the challenge is getting bigger and bigger. We have the example of last season. That’s why this year we’re determined to get off to the best possible start.“

He further added, “On a personal level, my task is to help the team as much as possible to achieve the goal of survival.”

Cadiz is as famous for its beaches as for its football team. On his journey in the city so far, Jeremias feels it has been positive. He explained, “In both seasons the objective was achieved, so important for the growth of the institution. As for Cadiz, I am fully adapted and enjoying daily life in a spectacular place. The weather, the beaches, and the people make Cadiz an incredible paradise.”

Argentina will give their all in the World Cup

Ledesma has been a part of Scaloni’s Argentina national team camp in the past and has shared the space with the Albiceleste. Speaking about his experience with the national camp, he said, “I would say that one of the keys to the success of this national team is that it is a very united team.”

Speaking on Argentina’s chances in the upcoming world cup, Jeremias further said, “There are some teams that come to the World Cup very well. Argentina is one of them, with a great team that also has very clear ideas. A World Cup doesn’t allow you any margin for error. But I’m convinced that Argentina will give their all in every game.”

When it comes to engaging with fans in India, Cadiz is probably ahead of any other Spanish team. And, the players are also aware of the affection they receive from India.

Ledesma said, “Yes, it is true that our social media team tells us this very often. We notice a lot of affection from India through social networks. It is a pride to have followers so far away. We are very grateful to them and we hope they continue to support us as always in this new season.”