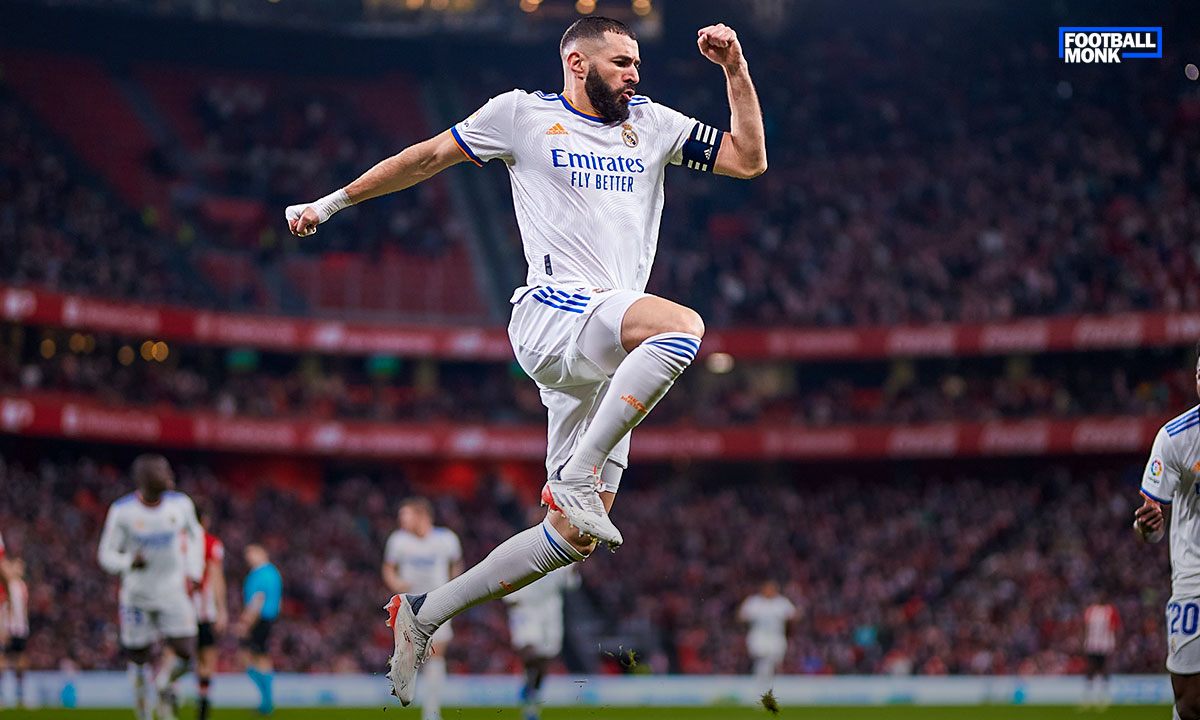 After the breathtaking performances of the French forward throughout the season, Karim Benzema is now probably the most overwhelming favourite to win the prestigious Ballon d’Or. Benzema took an integral part to help Real complete a double. Stats too shows his dominance up front when it matters the most.

After the departure of their main talisman Cristiano Ronaldo, it was up to the French international to carry Real Madrid’s attack. And, as expected, Karim Benzema delivered. The 34-year old proved instrumental in Real Madrid’s 14th UCL triumph this season. So what makes the French international one of the favourites to win the Ballon d”Or this season? Football Monk takes deep dive into Benzema’s season to find out.

The job of a forward is to score goals and put his side in the lead. For Benzema, this season’s goalscoring record was phenomenal throughout the entire course of the season. In the total 53 matches of the campaign, the Frenchman scored 49 goals and provided 18 crucial assists. With an average of 0.34 assists, 1.75 shots on target, and the potential Xg of 0.71 average per match there’s little doubt about his attacking contributions.

Benzema’s goal-scoring record was a big relief to the Madrid squad as they desperately needed someone who can register 30+ goals in all competitions. The goals were not only important but some of them were also crucial match deciding moments where the genius of the Frenchman helped the squad overcome potential knockout elimination.

Besides helping the team with the match-winning goals Benzema’s most notable commitment was to create the perfect dynamic duo with the young Brazilian. With an average of 2.1 goals per game, the crazy numbers from both Vinicius and Benzema speak volumes. It is quite evident how dependable Real Madrid is on these two to get the job done in the attacking third.

The French-Brazilian pair have combined for 8 goals in the league this season. This is more than any other duo in the top five European Leagues. And it’s not just about the crazy numbers. Benzema and Vinicius had a sort of telepathic relationship with them combining creating attacking scenarios. Just when the opposition tends to put pressure on Madrid midfield, one loose ball is all the duo needs to convert it into a deadly and fast counterattack.

Vinicius, for instance, almost identifies Karim’s favourite positions all over the pitch. The forward can predict off-the-ball movements to perfection, thus letting him explode in the wings. Benzema is almost like a mentor to the 21-year-old, and his experience and greatness seem to be rubbing off the former Flamengo prodigy.

Clutch Performances in the crucial stage

Benzema not only helped Real Madrid with goals or formed an attacking duo with Vinicius. It’s his immense performance against the big teams in clutch situations that needed the spotlight. In UCL knockouts from the very beginning, Real faced the challenge of PSG, Chelsea, and Man City to move forward. The striker performed massively leading them from the front in the memorable comebacks against all three of them. All those teams were probably tactically superior to Madrid on paper but it was the little moments of magic from the French forward that made all the difference.

Benzema scored a brilliant and inspiring hattrick against PSG. He created a total of 7 chances with a 43% conversion rate against the Parisians. The Frenchman had a 1.07 Xg rating and also with 83% accurate passing contributing to a total of 3 key passes. This great momentum was followed by a total of 4 goals scored against the defending champions, Chelsea. These goals took the match away from them. Lastly, Benzema netted thrice against Manchester City, keeping a 100% chance conversion rate.

The overall stats show how much dominance he showcased throughout the season in the most difficult of circumstances. He scored 15 goals in the Champions League in 2021-22, the joint-third most in any single-season Champions League campaign.

Comparison to others in Europe

Benzema, when compared to the others statistically, takes a huge leap with his consistent performances. From scoring or providing assists in La Liga to help them maintain the gap between league rivals to carrying the goal-scoring pressure in Champions League matches, no one comes anywhere close. With 27 goals and 12 assists in the league, Benzema was directly responsible for 48.75% of Madrid’s La Liga goals in 2021-22. He registered more direct goal contributions than most of Europe’s elites.

Karim finished as the top scorer in LaLiga, nine ahead of second-placed Iago Aspas. He also finished second on the assists chart after Ousmane Dembele. The 34-year-old scored 10 goals in the Champions League knockout stages in 2021-22. The tally is the joint-most by a player in a single campaign, equal with Cristiano’s 2016-17 season. Not to mention his great goal-scoring record for his nation on the international stage. Benzema also got five goals and an assist in seven France games in 2021-22. This includes the equalizer against Spain in their UEFA Nations League final win.

Combining all the data and impact it’s very clear why speculations of Benzema securing his first Ballon d’Or are emerging. It’s not just the stats but also a very clear understanding of Benzema’s dominance despite his age and how much character he showed through the whole journey. Record 7 time Ballon d’Or winner Messi also praised the Frenchman. The Argentinian also expressed his opinion over Benzema’s chances of winning the awaited award.

“There’s no doubt, it is very clear that Benzema had a spectacular year,” Messi said in an interview with Argentine TV channel TyC Sports. “I think there is no doubt this year,” Leo added.

Only time will tell if the Frenchman will be awarded for his brilliant endeavour this time around.

Nations League: Portugal and Spain play out a 1-1 draw