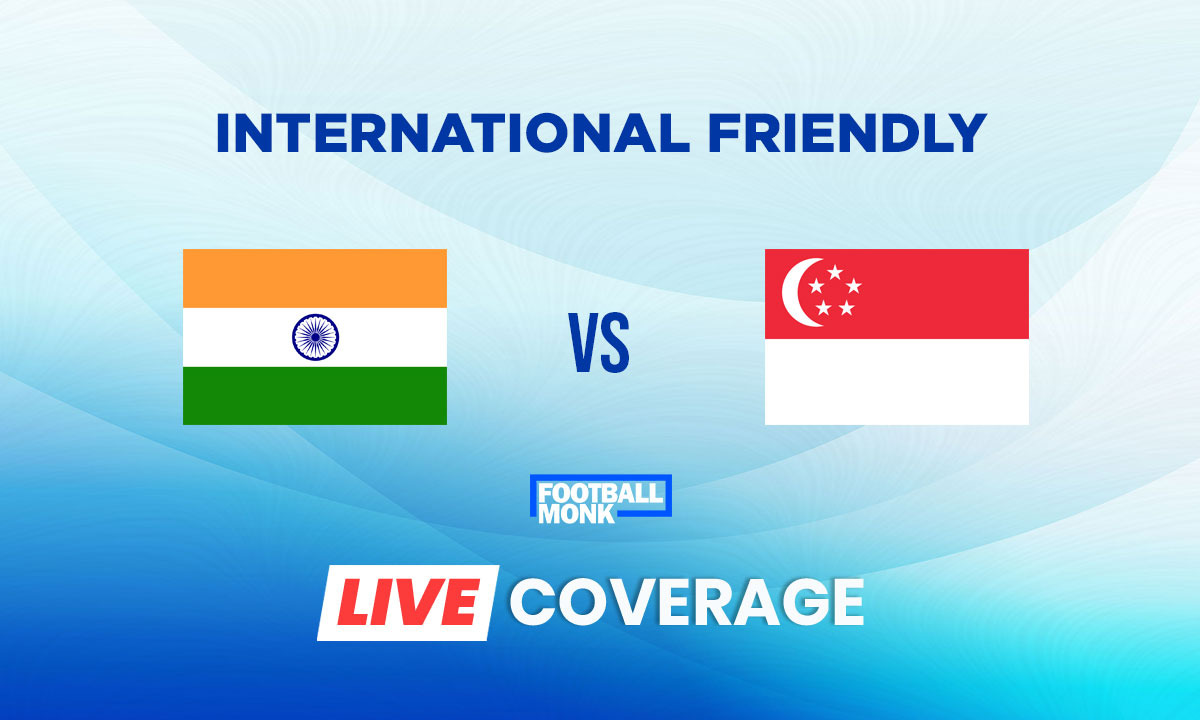 The Indian Football team takes on Singapore in their first of two friendly matches in Vietnam today at 5.30 PM in Ho Chi Minh City. Follow this space for all live updates.

The teams line up as follows:

Click below for the free Live stream, via Next Sports.

A confident Team India will look to take on Singapore in their first FIFA International Friendly in the Hung Thinh Friendly Football Tournament at the Thong Nhat Stadium in Ho Chi Minh City in Vietnam on Saturday (September 24, 2022). The match is scheduled to kick off at IST 5.30 pm and will be broadcast live on Eurosport India and streamed live on Indian Football Facebook Page.

Head coach Igor Stimac sounded confident yet cautious on the eve of India’s first meeting with Singapore in 10 years. The Croatian coach said though Singapore has made huge progress in the past few years, India has the ability to tame their opponents.

“Singapore made big progress in recent years. They have a new coach, who has made some changes in the system that often makes things difficult for the opponents. But I will tell my players to play confidently against them and show what exactly we have in store for them,” Stimac said.

“Singapore are quite good especially in the high pressing area. I have observed the way they press the ball all over the pitch to make things which is making it tough for the rivals. So, there is one small advantage they have in this regard,” added the coach.

The 55-year-old is aware of some of the fitness challenges his team is facing. But at the same time, he believes his players have the ability to fight on the pitch till the final whistle is blown. “We should not ignore the fact that their fitness level is, at the moment, better than ours, but we need to be composed and get on the field with our morale high.”

The Blue Tigers will be seen in action for the first time after their successful campaign in the AFC Asian Cup Qualifiers in June where they played three matches and finished with a hundred per cent win record.

“Football is a process and we need to be patient. It is a hard-working process where you need to know what you need to do to get there at the end,” the coach said.

Singapore coach Takayuki Nishigaya sounded cautious before the match against the Blue Tigers. The Japanese is aware of the challenge that India will pose. “Their individual qualities are very high and likewise, they also have very good fitness and technical levels, while we also have to be able to cope with their pressing,” he told FAS.org.sg.

Nishigaya noted the attacking strengths of India, which will be led by captain and legend Sunil Chhetri. Still going strong at 38, the forward has scored an incredible 84 times in 129 international appearances – putting him joint-fifth on the list of all-time international goalscorers and the third-highest among active players, behind only Cristiano Ronaldo and Lionel Messi. Alongside him, Lallianzuala Chhangte has been in prolific form for Mumbai City of late, while the likes of Anirudh Thapa and Brandon Fernandes are expected to dictate play in the middle of the park.

Having fielded a line-up that allowed him to assess options against Vietnam, which saw Joshua Pereira handed his first cap and also some less experienced players take to the field, Nishigaya noted that he will “choose my best players” on Saturday. This could mean the restoration of Irfan and Ikhsan Fandi, who were not involved two evenings ago as they were recovering from injuries, although Shahdan Sulaiman could remain sidelined with an illness. In goal, Hassan Sunny is set to make his 100th international appearance, which would make him only the second goalkeeper to achieve this feat for Singapore after David Lee.

Nishigaya urged his charges to put the first defeat out of their minds and focus on a better performance and result against India, saying: “We have to remind ourselves of our strengths and what we have to do against these teams.”

The match will be telecasted live on Eurosports and streamed live on JioTV, the Indian Football team’s official Facebook page and the Next Sports Youtube channel.