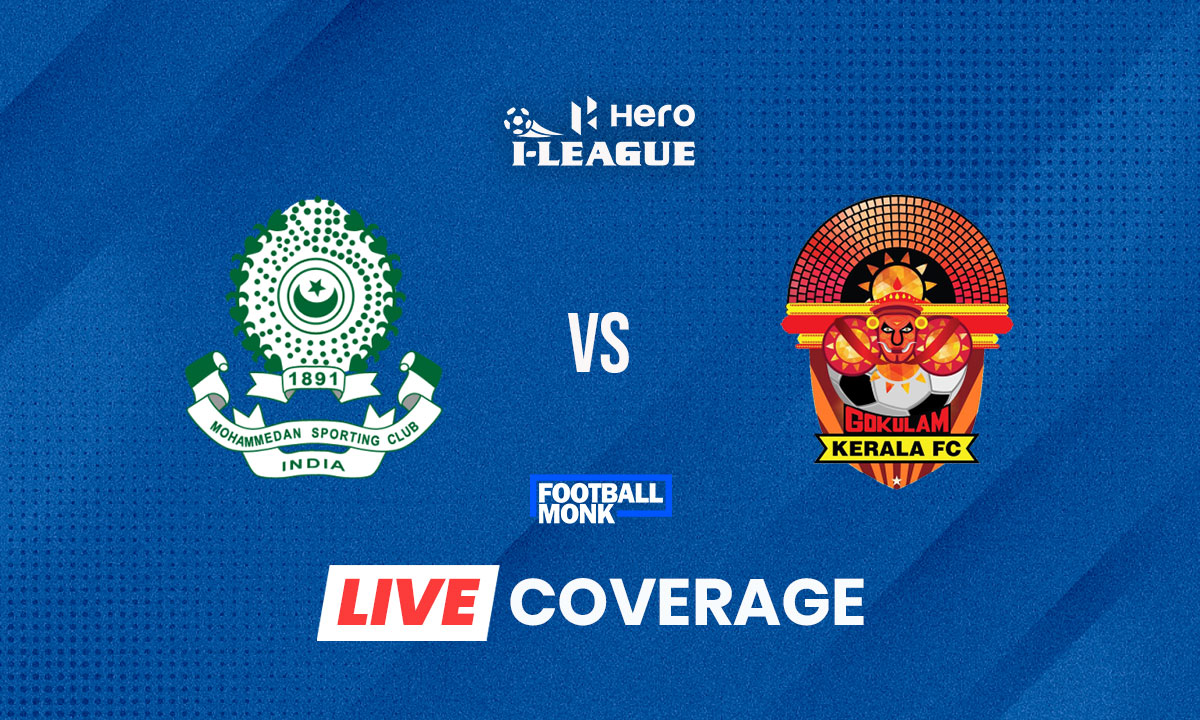 Mohammedan SC, searching for their maiden I-League title, are up against Gokulam Kerala FC, who are aiming to become the first team in the Hero I-League era to defend their crown.

This virtual final of the 2021-22 season will take place at the majestic Vivekananda Yuba Bharati Krirangan in Kolkata at 7 PM. Follow this space for all live updates from the match.

Rakshit makes a couple of saves before the ball goes over the bar. They still have to wait for the celebrations. GKFC 2-1 MDSC.

Gokulam players are very confident on the ball, as they go for frequent counterattacks. GKFC 2-1 MDSC

Six minutes added. Six minutes for Mohammedan to salvage something whereas on the other side, six minutes of wait for Gokulam. GKFC 2-1 MDSC

Beautiful ball in from the right-wing but Marcus misses a sitter. He would have scored that 9 times out of 10. GKFC 2-1 MDSC

Alex Saji makes a beautiful block and clears the ball. But the ball roles out for a corner. GKFC 2-1 MDSC

Azharuddin does a Benzema on the sidelines and puts in a brilliant cross, but Buam slots it wide. GKFC 2-1 MDSC

Gokulam headcoach gets a yellow card. He won’t mind that though. GKFC 2-1 MDSC

Marcus Joseph gets agonisingly close from the header. But it seems like not his day. GKFC 2-1 MDSC

Jassim gets a booking. The resultant freekick doesn’t yield anything. GKFC 2-1 MDSC

Rudovic catches the goalkeeper off-guard and shoots. But the shot goes wide from an acute angle. GKFC 2-1 MDSC

Faisal Ali with a great run down the right-hand side, skipping past 3 challenges. But, the last touch is heavy and Dagar collects. GKFC 2-1 MDSC

Emil Benny scores right at the stroke of the hour mark. Luka Majcen releases an inch-perfect outside pass on the counter and Emil slots it right at the same spot where his teammate scored 10 minutes earlier. GKFC 2-1 MDSC

Marcus Joseph’s freekick takes a deflection from the wall and the ball ends up into the back of the net. Game on! GKFC 1-1 MDSC

Rishad breaks in a counter-attack and a sudden burst of speed defeats the three defenders. The midfielder slots it past the keeper in the bottom corner. Gokulam leads! GKFC 1-0 MDSC

Abdul Hakku gets warned by the referee for his frequent fouls. Still, no card shown. GKFC 0-0 MDSC

Fletcher taken off the pitch on a stretcher. Shreekuttan comes in. GKFC 0-0 MDSC

Fletcher collects the ball on a counter-attack and spots the Mohammedan keeper way off the line and shoots. Could have been an extraordinary finish but the shot ends up wide. GKFC 0-0 MDSC

Majcen receives a cross on his chest and shoots on the turn. The shot goes flying over the bar. GKFC 0-0 MDSC

Abdul Hakku sits down as he feels some problem in his stomach. Game stopped temporarily. GKFC 0-0 MDSC

Mohammedan SC slowing the pace of the game as they soak the pressure applied by Gokulam. Scores are still level. GKFC 0-0 MDSC

Joseph takes a shot from a tight angle, but goes over the bar. Time for a cooling break. GKFC 0-0 MDSC

Rahaman with a brilliant ball in, but Marcus misses the header. Stojanovic collects the clearance and weaves some magic, but the attack dies down. GKFC 0-0 MDSC

Marcus Joseph and Manoj Md. combine excellently in the box but fail to convert the chance as Gokulam clears. GKFC 0-0 MDSC

Ball comes in from the right-wing, but goes over Marcus Joseph’s head. Out for the throw-in. GKFC 0-0 MDSC

Both teams haven’t broken the deadlock yet. GKFC 0-0 MDSC

Alex Saaji with a great down the flanks. Wayne Vaz clears. GKFC 0-0 MDSC

This time for the home team. Marcus’ shot didn’t have the power. Goalkeeper saves. GKFC 0-0 MDSC

Mohammedan coach Andrey Chernyshov always believed, even though Gokulam were a long way ahead with matches running out. “I told my players that this is football. Anybody can win or lose in a minute. We kept playing well and had good results. Now we have the chance to win the title and our fans in the city are excited about it.”

Gokulam Kerala will not only be up against a resurgent Mohammedan side, but also against the home crowd. Coach Annese knows that going for a draw is not an option. “We’ve scored 42 goals so far. We play an attacking style and always go for the win. If we play to defend, with so many Mohammedan fans against us, we’ll only invite pressure. We need to play for the win to kill their hopes,” said the Italian.

Mohammedan coach Chernyshov is hoping to make the most of the Black and White Brigade support. “Of course it will be an advantage for us to have a big crowd behind us tomorrow. It’s not an easy situation for Gokulam.”

“We’ve been waiting for this match since July last year. It’s going to be a big game and I hope the fans will enjoy good football tomorrow,” Chernyshov concluded.

The match will be streamed live on the Indian Football Team Facebook page.