How Indian football team could line up against Qatar 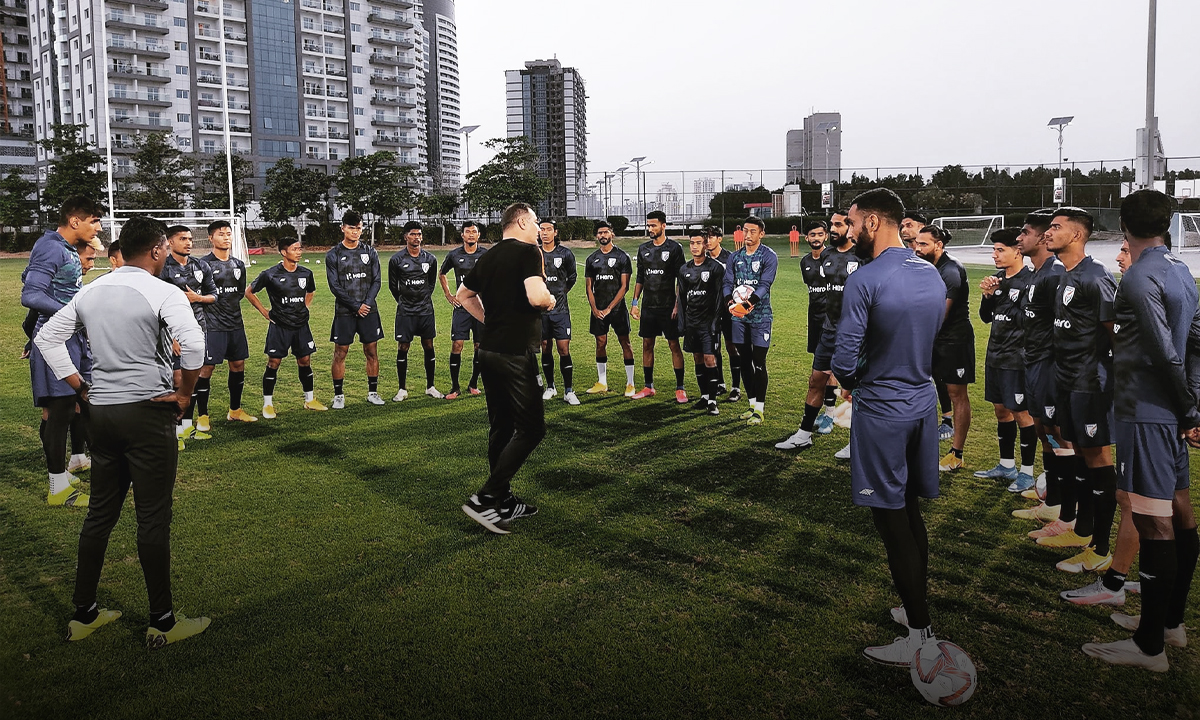 In little less than a week’s time from now, the Indian football team will face Qatar in the FIFA World Cup Qualifiers. The Blue Tigers’ preparations are already in full swing. 28-member India reached Qatar earlier this month. The Blue Tigers have been sweating it out in Doha since then.

Igor Stimac looked at the possibility of a friendly against Philippines, but the Qatar ministry turned down the proposal. With a fully fit squad to choose from, here’s how Football Monk thinks India could lineup against the Asian champions.

Gurpreet is one of India’s finest goalkeepers of this generation. He is the most preferred man under the sticks for Stimac. Although he didn’t have a great season with Bengaluru FC, it is his experience and reflexes that earn him the spot.

The last time India played Qatar, Sandhu was exceptional under the sticks. He denied Qatar forwards several times, earning a clean sheet for the team. He will surely take motivation from the last game to boost up his performance.

Pritam Kotal has been the mainstay right-back for the team for a long time and he will possibly continue to have his place in the team. His attributes include quick interceptions and shielding the ball from the opposition. Moreover, his experience on the world stage will be valuable for other players in the team.

Arguably India’s best defender right now, Sandesh Jhingan has been the backbone for the national team in recent years. He had an excellent season in the ISL with ATKMB. Jhingan was a vital cog in the Indian defence when India held Qatar goalless in 2019.

Adil has been solid at the back for FC Goa ever since he moved in the winter window. His experience in the AFC Champions League will be handy for the team going into a game against tough opponents. Adil Khan also comes with an added advantage of goalscoring prowess. His last-minute header against Bangladesh won a point for the Blue Tigers in 2019.

The teenager rose to the occasion in the previous edition of ISL with his defensive solidity and tactical awareness. Being fast-paced, he can quickly convert defence into attack with his swift pace and passing abilities. Although he lacks experience, Mishra can be an important player for Stimac.

ISL 2020-21 winner with Mumbai City FC, Rowllin Borges is one of India’s finest. The Goan will form the heart of the midfield for India. His attributes include pin-point passing and shielding the defence. Additionally, his defensive-minded game strategy will be of utmost importance for India.

Brandon has been in red-hot form in the recently-concluded AFC Champions League and ISL. He will surely be the first name in the teamsheet among midfielders. Brandon assisted all the goals India scored so far in the qualifiers. A lot of things will depend on his playmaking skills if India want to finish 3rd in the group.

Possibly the toughest decision Stimac will have to make is between Anirudh Thapa and Glan Martins. Anirudh is among those rare talents in the midfield who can contribute to the defence as well as the attack. Thapa’s importance in the national team has been on the rise ever since he made his debut. Under Igor Stimac, the midfielder flourished into a really matured player.

Chhangte had an excellent season with Chennaiyin FC and hence his consistent hard work will surely earn him a place at the left wing for the Indian football team. Blessed with blistering pace, Chhangte is someone who can take the game to the opposition. His fast legs will be vital for India on the counterattacks.

The greatest modern-day footballer for India, Sunil Chhetri will lead the attack. He will surely be the first name on the team list. His tremendous experience will be the greatest strength for the Indian football team going into the game.

Manvir was among the best Indian forwards in the recently concluded domestic season. The ATKMB forward added six goals in his tally, topped with three assists. He was in red-hot form down the right flank and hence, Stimac will look to use the striker to the fullest.