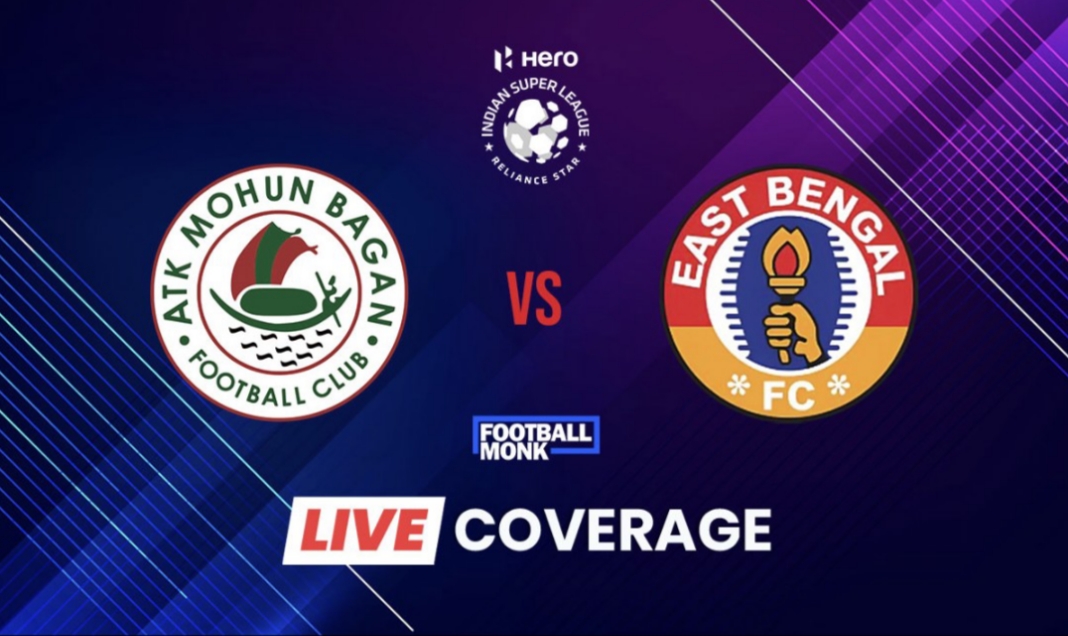 The second fixture of the day sees ATK Mohun Bagan hosting East Bengal in the first Kolkata derby of the season in the ISL. Follow this space for all live updates.

Drama and excitement are in store for the spectators this weekend as the Kolkata Derby between arch-rivals ATK Mohun Bagan FC and East Bengal FC take center stage in the ISL at the Vivekananda Yuba Bharati Krirangan, in Kolkata, on Saturday.

ATK Mohun Bagan will come into this game well-rested after a break during Matchweek 3. In their last game in Matchweek 2, the Mariners netted five against Kerala Blasters in an audacious 5-2 win. Morale will also be high for their opponents because East Bengal secured a stellar 3-1 victory in Matchweek 3 against NorthEast United FC in Guwahati, which was their first win of the season.

The inclusion of Colaco had an instant impact on ATKMB. The 23-year-old winger provided two assists to Dimitri Petratos, who ended the game with a hat-trick. Hugo Boumous walked away with one assist in the last game and has been influential for the Mariners in both games so far.

“It is just another game. Three points for the winner, one point if it is a draw. Of course, it is special because I know the city is excited about this derby. Everybody wants to enjoy the match,” said Ferrando. “For us, it’s just another game and a new opportunity to get three points. Last season the gap between first and last was large. This time it is much closer, and we are going to treat every match like a final,” he added.

East Bengal FC ended their 10-game winless run in the Hero ISL with a victory against the Highlanders last week. This was only their fifth win in 43 Hero ISL games. However, the win could prove to be the perfect fuel for the performance they need in the derby.

East Bengal FC head coach Stephen Constantine deployed a three-man backline in the first game of the season against Kerala Blasters. After that, the Englishman switched to an old-school 4-4-2 for the next two games. The center-back duo of Ivan Gonzalez and Lalchungnunga has started in every game so far.

Shot-stopper Kamaljit Singh has produced 12 saves in 3 games so far. Only BFC’s Gurpreet Singh Sandhu has made more (14 saves in 4 games). Charis Kyriakou and Jordan O’Doherty got on the scoresheet in the last game.

“For me all games are important. The fact that the Kolkata Derby is the biggest game in the Indian football calendar makes it a special game. We are excited to face ATKMB. They are a good side, we are expecting a tough game, and we will try our best to take points,” said Constantine. “We are here to win games. We have trained well in the last week, and I expect us to give a good account of ourselves tomorrow,” he added.

The two sides have played one game each at this venue this season and have both lost. A lot more than three points will be at stake as the arch-rivals clash, eyeing their first win at the stadium this season.

The match will be telecasted live on Star Sports Network and live-streamed on Disney+Hotstar and JioTV.