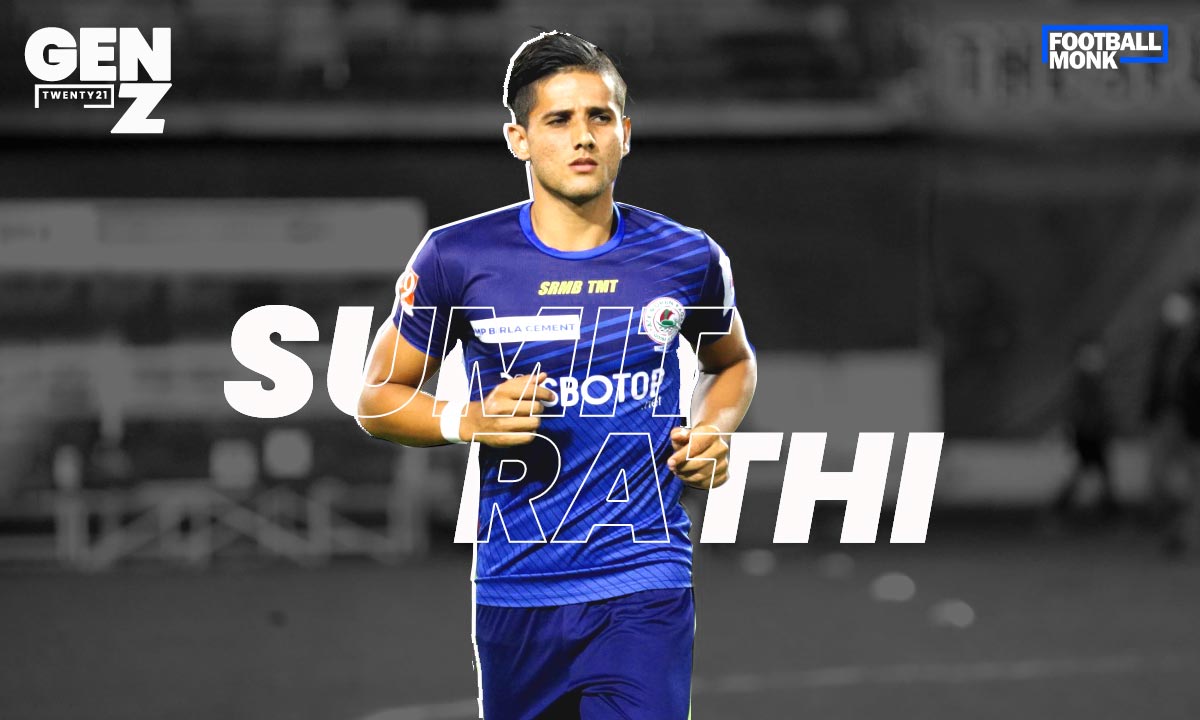 Football Monk comes up with a new series, GEN Z: The Future Monks of Indian Football. Here we present the 11 top talents across the country who we believe will be the future stars of Indian Football. The 4th feature on our list is Sumit Rathi, a young and versatile defender who can play across various positions at the back.

Sumit started playing professional football for the Chandigarh Football Academy at a very early age. There he played and sharpened his skills. He was the mainstay defender for the academy’s U15 team. He missed out on the Asia leg of the Manchester United Premier cup after contacting chickenpox just two days prior to the tournament.

Later, he joined the AIFF Elite Academy. Although his performances improved drastically, his bad luck seems to have accompanied him here as well. Sumit was named among the 25 probables for the U17 World cup in 2017. But he couldn’t make it into the final squad. Hence he once again failed to make an appearance in a showpiece tournament. But Sumit isn’t someone who will sit back and think about lost opportunities. He is someone who takes the setbacks and turns them into hope for the future.

Following the U17 world cup, Sumit Rathi joined the Indian Arrows squad. But badluck continued to be his co-passenger in his journey with the Arrows as well. Although he couldn’t get any appearances under his belt, Sumit credits his arrows stint as the stepping stone to what he has been post his days at the AIFF Developmental Squad.

A season later, on 9th October 2018, he signed for ATK FC Reserves team. Sumit made his first appearance for the ATK-R in the Sikkim Governor’s Gold Cup against George Telegraph. ATK-R won the match by a comfortable 5-1 margin. He made his 2nd Division I-League debut against Kolkata Giants Mohammedan SC and left an instant impact on the pitch. Sumit was adjusted the man of the match in a 2-0 victory over the Black Panthers.

Later on, Sumit made numerous match-defining contributions for the ATK Reserves. Hard work paid off as he got a call-up for the U19 Indian team. He played three matches in the Granatkin Memorial tournament in Russia, and then four matches in an exposure tour in Turkey. He missed a huge chunk of the CFL Div-1 owing to his national team duties at the OFC Youth Development tournament in Vanuatu.

The pinnacle of his performances with the U19 team came against the host nation when his goal led India to victory. He went on to win the OFC Youth Development tournament crown, followed by the SAFF Youth Cup triumph in Nepal. On his return to India, he played in the last game of the CFL Div-1 against Dalhousie FC. His momentum continued as ATK-R (Registered then as ATK Juniors) went on to clinge the silver medal and promotion on that evening.

Sumit was soon promoted to the ATK Senior team. He mostly spent time on the reserve benches in the earlier days. He made his debut against Odisha FC, coming on as a half-time substitute. His first start in the ISL came against Hyderabad FC, with the game ending at even terms for both teams. Since then, he made a permanent place under Habas for the eventual champions. His best performance came against Mumbai City FC, where he won the Hero of the Match award.

He put up an equally brilliant shift in the ISL Semifinals against Bengaluru, guiding ATK FC to the finals. Playing beside John Johnson in the final, Sumit made sure his team goes on to become the club with the most ISL championships. Sumit won the ISL Emerging Player of the Season award in 2019-20. He ended that year as the most decorated Indian player.

His excellent performances earned him a contract extension, keeping him at the Kolkata giants till 2025. Following the merger and the arrival of Sandesh Jhingan, Sumit was mostly reduced to the bench at ATK Mohun Bagan. He made 6 appearances in 2020-21, a tally comprising of only two starts. Still, he was quite impressive whenever given the opportunity. He once again reached the ISL Finals. However, he ended up on the runners-up side this time.

Sumit’s greatest strength lies in his hardworking abilities. He is a beast on the training grounds. Sumit is someone who can continue hitting the gym and the pitch back to back without getting tired.

Habas mostly deployed a 3-5-2 formation and used Sumit either as the left wing-back or the left centre-back. The teenager quickly adapted to this new system and formed a formidable part of ATK FC’s road to success. His pace came as an added advantage as he could quickly launch a counter from a defending position. His comparative short height enables him to maintain a lower center of gravity which helps him to make a sliding tackle quicker than others.

Being a fan of Sergio Ramos, Sumit fancies himself to become the highest goalscoring defender for the country. This dream reflects in his game as well. He took 4 shots and provided 7 crosses in the 2019-20 season.

One big setback of Sumit’s gameplay is his tendency to leave gaps behind his position. With a counter-attacking team, there always remains a risk of counter-attacks from the oppositions, and the gap in Sumit’s style of play was well exploited. The brightest example of this came in the second leg of the semifinal against Bengaluru FC, where Ashique Kuruniyan got the all-important away goal by using the space behind Sumit.