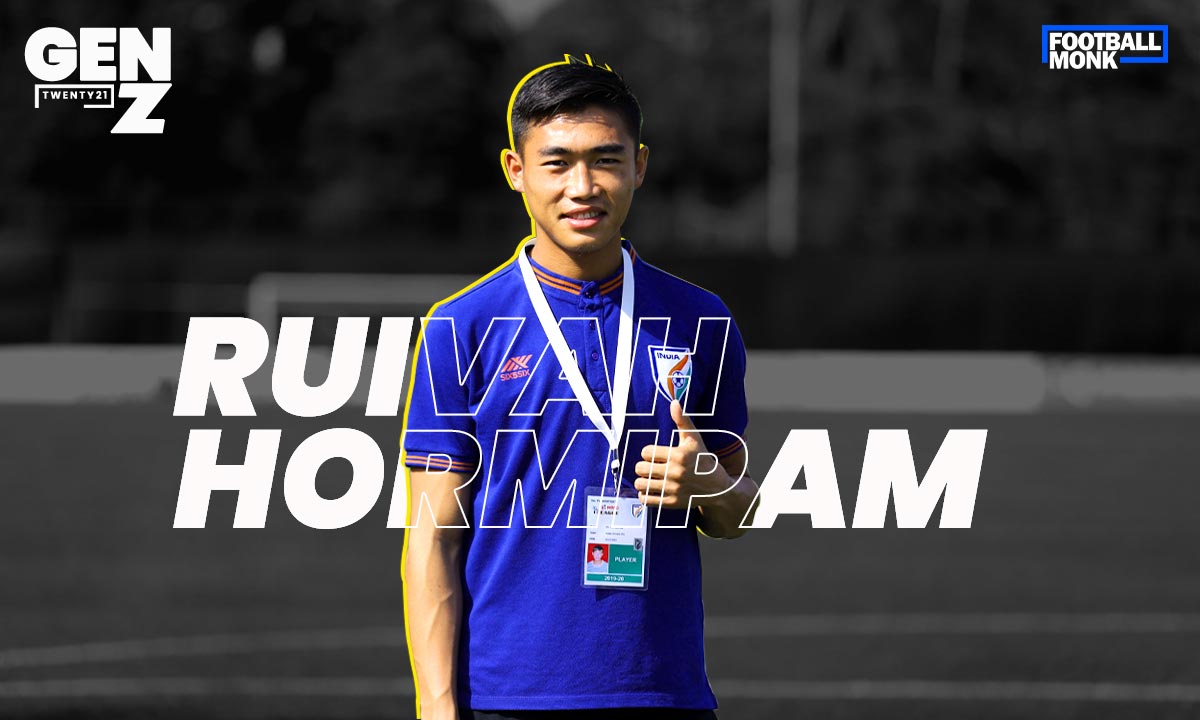 Football Monk comes up with a new series, GEN Z: The Future Monks of Indian Football. Where we present the 11 top talents across the country who we believe will be the future stars of Indian Football. The next feature on our list is Hormipam Ruivah, a young centre-back who is on the rise.

Born and brought up in Manipur, Ruivah has had football in his veins from his very childhood, thanks to his football-crazy motherland. In 2018, Minerva Punjab FC’s scouting team came to Imphal and that was when they discovered Ruivah. He joined their youth setup and went on to become a regular in their youth team.

He was a central figure behind Minerva Punjab’s Hero Elite League (U-18) title back in the 2018-19 season. What followed was a maiden youth national team call-up. Ruivah got the chance to represent the U-18 national side at the 2019 SAFF U-18 Championship in Nepal, where India ended up winning the title.

Following a great display with the U-18 team, Ruivah joined AIFF’s developmental side Indian Arrows on loan from Punjab FC in 2019. The 20-year-old appeared in 14 I-League matches for the Arrows in the 2019-20 season and clocked 1260 minutes.

The 2020-21 season saw him return to RoundGlass Punjab FC following the end of his loan spell with the Arrows. In the recently concluded I-League season, Hormipam Ruivah recorded more than 600 minutes of game time which included six starts. After an impressive display in the I-League for two consecutive seasons, the youngster has decided to make a move to India’s top flight and has inked down a three-year contract with Kerala Blasters.

Defence is a test of vigilance and Ruivah is someone who believes and follows the principle of no-nonsense defending. Tackling, interceptions and ball recoveries are often considered as an art form and Ruivah is adept in every area of the trade.

During his first season in the I-League, he averaged 20 challenges, nine interceptions, four tackles and 11 ball recoveries in every game, along with an impressive passing precision of 74%. An add-on to this was his impressive dribbling technique as he recorded 75% successful dribbles and also provided an assist.

The following season saw him winning 66% of challenges and 58% tackles. For RoundGlass Punjab FC, he racked up a total of 226 challenges, 90 interceptions, 52 tackles and 131 ball recoveries in 14 outings. Hormipam Ruivah is a fearless eagle who is not afraid to go forward with the ball and doesn’t mind bringing the goalkeeper into action either.

One for the future

As the young defender has now made the jump to India’s top division with the Yellow Army, he will definitely have a new and huge challenge in 2021-22. Ruivah is a calm and composed athlete who doesn’t speak much off the field but makes sure his gameplay does, on the field! He’s a leader on the pitch and idolizes Spain’s skipper Sergio Ramos. If he can prosper at Kerala Blasters, he will certainly go a long way!