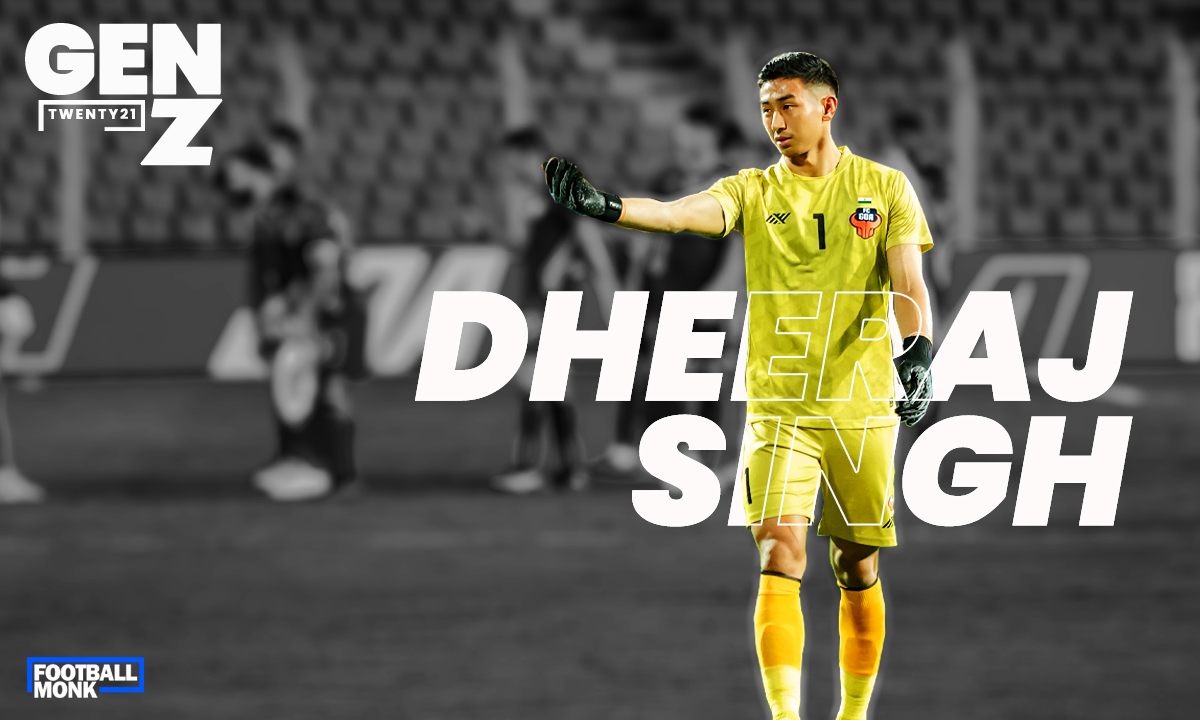 Football Monk comes up with a new series, GEN Z: The Future Monks of Indian Football. Where we present the 11 top talents across the country aged who we believe will be the future stars of Indian Football. From youth to continental levels, Dheeraj Singh Moirangthem has gained a lot of recognition in Indian football. Let’s take a deep dive into the 20-year-old’s career path.

Dheeraj Singh Moirangthem spent his youth career at the AIFF Elite Academy, training with some of the future stars of Indian football. He was part of the historic India U-17 squad in the 2017 World Cup, hosted by India. That year, Dheeraj started his professional football career at Indian Arrows. Next season, he signed for Kerala Blasters and started in 13 matches. It was then that he began establishing himself in the Indian football circuit.

After the one-year run with the Yellow Army, Dheeraj joined ATK. Though in Kolkata, he didn’t get much opportunity as he just had one appearance in the whole season. Yet, for a player at that age, it was a great opportunity to learn from the best seniors.

In 2020, after the merger of ATK and Mohun Bagan, he stayed with the newly-formed ATK Mohun Bagan. However, in the first half of the season, he didn’t get an opportunity to come on. It was quite understandable as ATK Mohun Bagan’s number one goalie Arindam Bhattacharya was having a great season.

Dheeraj decided to move on and explore new challenges. During the winter transfer window, he joined another Southern club, FC Goa. He started nine games for the Gaurs in the rest of the season impressing the Indian fans yet again.

The sky is the limit for Dheeraj’s rise. He played a crucial role in FC Goa’s first-ever AFC Champions League campaign. He came up with an excellent performance providing his team a solid wall behind the defense.

During the ACL group stage matches, the custodian was even appreciated by Al Wahda FC coach Henk ten Cate. It shows that Dheeraj Singh Moirangthem is on his way to becoming a continental sensation.

The key to Dheeraj’s success is his agility. He has a rare talent for anticipating opponents’ movements as well as the pathway of the ball. It gives a goalkeeper a slight edge over the striker. And in a close encounter, it can save the day! This ability is usually natural. But at a professional level, one needs to master it with immense training and calm composure.

In addition, the 20-year-old is also very good with quick reflexes. How often do we see goalkeepers making pinpoint saves just by moving their hands or legs, with minimal reaction time? It’s a great advantage for Dheeraj. It gives the goalkeeper confidence to commit himself in dangerous situations. Besides, it gives him a better chance in one-on-one situations.

Dheeraj Singh Moirangthem is a complete modern-day goalkeeper. It isn’t needed to mention, how important the goalkeepers’ footwork has become in the last decade. Dheeraj has evolved himself with this evolution. He has worked hard on his footwork over the years.

It not only gives the goalkeeper opportunity to open spaces in the flanks, but also gives the defenders a little bit more confidence, that the goalie has got their back for passing. It makes the build-up play much smoother and transitions much faster.