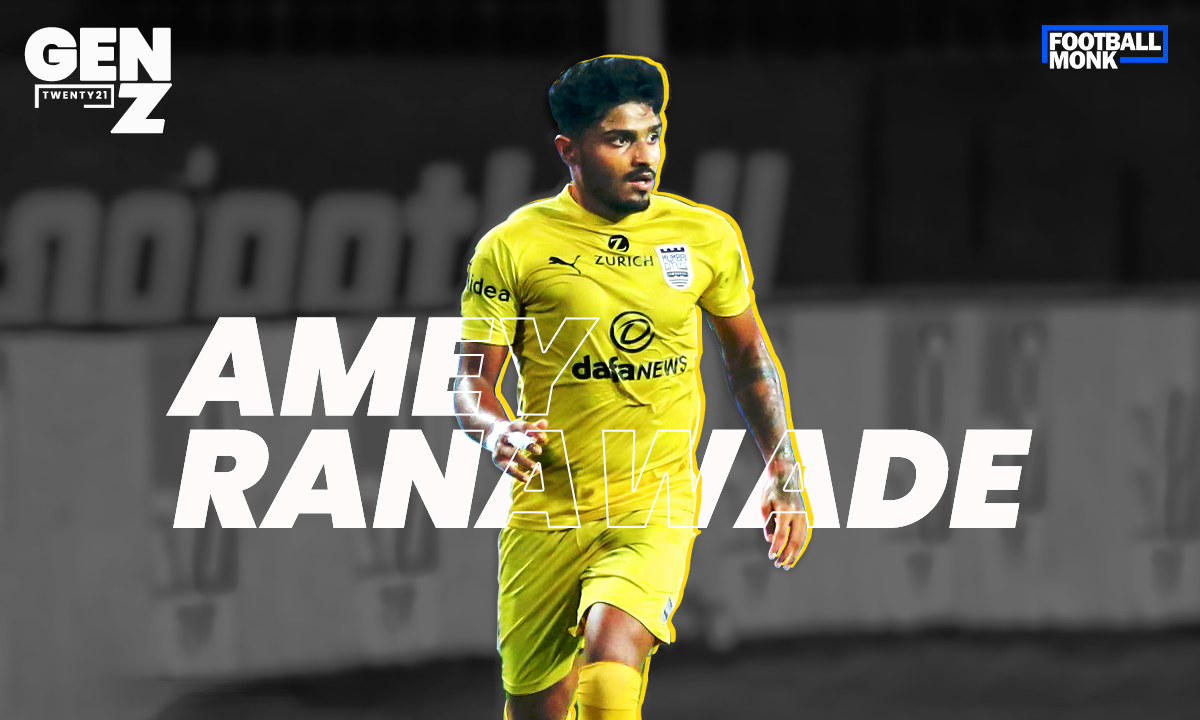 Amey Ranawade is currently one of the most versatile sensations in Indian football. He had a wonderful season with Mumbai City FC last season. Thus making his way into the right-back position of the GEN Z lineup. Football Monk takes a closer look into his career path and way towards success.

Amey started his professional career at former I-League club DSK Shivajians FC back in 2015. And only the next season, he found himself at ISL franchise FC Goa, at an amazing age of 18.

Apart from that, Amey was always within close eyes of the Indian National team. He represented our country regularly for the U-17 and U-20 sides respectively.

In 2018, Amey joined Kolkata Giants Mohun Bagan. It was an instant success for him, as Mohun Bagan went on to win the Calcutta Football League for the first time in nine years.

Next season, he made a comeback to his former side FC Goa. Though his game time didn’t improve much from his previous experience. Amey only had 2 appearances for Goa that season. Later on, he spent the rest of the season at I-League 2nd Division club, Bengaluru United.

2020 was the year of the turnaround of Amey. His former coach Sergio Lobera had joined Mumbai City FC from FC Goa. Lobera instantly wanted to bring the players he had previously coached. Amey was no exception. He got the call from Mumbai and from there on he never had to look back.

Amey had a total of 20 appearances in a well-built Mumbai City FC squad. They went on to win the League Winners Shield for finishing the league on top of the table and eventually the ISL Trophy as well. Amey’s active runs down the right flank and his defending capabilities helped the Mumbai team to become almost invincible.

First and foremost, a side back’s duty is to stop the opponents’ wingers during the transition and to keep the defense compact while defending. Amey has succeeded with flying colors in that job for Mumbai.

Lobera’s team plays with an attacking mentality. And to make those attacks count, they have to increase numbers in the flanks. Amey plays a crucial role in that demanding system. His forward runs not just pressurize the opponent’s defense but also make space for the forward players.

Mumbai mostly relies on short passes. And that demands passing abilities from all the players. Amey is capable of doing that as well. He can provide the ball to the midfielder in the double pivot. Amey can also combine brilliantly with the right-winger to make space upfront.

With a high defensive line, comes the danger of behind runs. And many fast has exploited that weakness against Amey. Sometimes, defenders get carried away by offside trapping. And eventually, they leave the striker alone. It’s one area, where the 23-year-old may improve in the future.

With the fast pace at which Mumbai operates, it demands much from the defenders to pass the ball in close encounters. It can create trouble for Amey sometimes. As we have seen him losing the ball in defensive positions.

Amey has a tendency of committing to challenges far away from the penalty box. With his quick feet, he often succeeds to stop the attack very quickly, but it can lead to some harsh outcomes. The tackles are often unnecessary and could be avoided by just chasing the player. Amey has to make more sensible decisions in these situations. Because it can not only give away free-kicks but can also get himself booked by the referee.

Mumbai City FC will compete in the AFC Champions League next season. This continental league is the perfect opportunity for Amey to establish himself as a regular in the Indian football circuit. With his quick rise to eminence, Amey will definitely compete for his spot in the Indian National team, in near future.