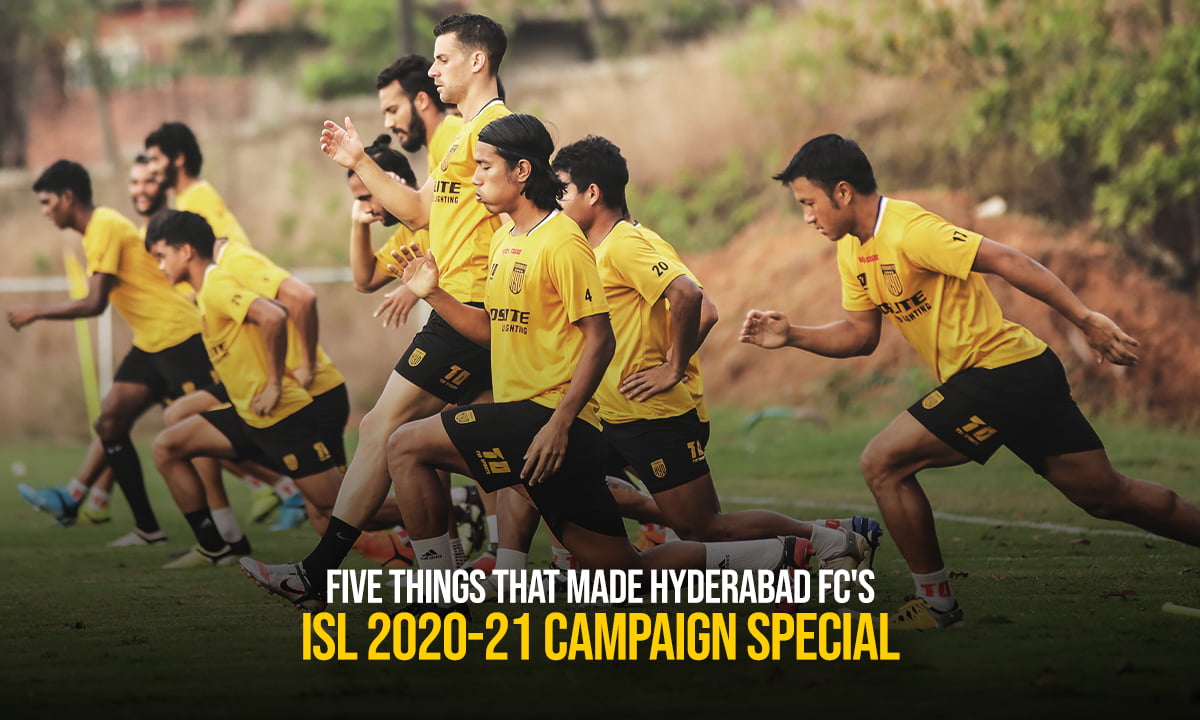 Hyderabad FC had a season to remember in ISL 2020-21, finishing 5th in the group table. The Nizams narrowly missed out from the playoff spots, however, this takes nothing away from the overall success they achieved.
Today, Football Monk takes a look at what made Hyderabad FC’s last season so special.

Hyderabad FC’s head coach Manolo Marquez deserves one of the biggest credits for the memorable season of the Nizams. The Spaniard arrived at Hyderabad where things were in turmoil and transformed the face of the club in just six months. Hyderabad earlier appointed Albert Roca but he had to leave as Spanish Giants FC Barcelona came calling, and Manolo came in very late into the scene as a replacement.

However, he didn’t take much time to settle in and molded the club into his own philosophy. His impact was felt right from the start as Hyderabad FC went the first 5 games unbeaten. The Spaniard preferred the 4-2-3-1 formation, but he kept on switching things according to what the on-field conditions demanded. Manolo’s determination and disciplined approach was a big driving factor for Hyderabad FC It pushed them for the playoff spots till the final matchday of the league season.

Hyderabad FC acquired the services of experienced marksman Aridane Santana ahead of the season. As expected, the former Odisha FC Striker became the top scorer for the team, netting 10 goals. In addition to Aridane, the club signed foreigners like Lluis Sastre, Fran Sadaza, and Joel Chianese. Whose solid performances formed the foundation for the Nizam’s success.

On the other hand, Sastre played the role of pivoting the midfield alongside forming a defensive screen for the men at the back. In the offence, it was Joel Chianese and Fran Sandaza who chipped in with goals and assists. As their target man, Aridane continued to finish it off perfectly.

#3 Experienced Indians leading from the front

In addition to the foreigners, a lot of credit goes to the experienced Indian contingent. Players like Halicharan Narzary and Laxmikant Kattimani rose to the occasion for the team at the very right hour. Narzary was particularly was impressive on the wings, scoring 4 goals and being the top Indian goalscorer for his side.

In-form players like Hitesh Sharma and Chinglensana Singh further enhanced the team’s success. The former had one of his best seasons in the ISL last season. Hitesh played the perfect role of a tuner as he pulled strings aptly in the middle of the pitch. Sana’s excellent performance at the back earned him a call to the national team.

Although Hyderabad FC had a lot of experienced players on their roster, it was their youngsters who stole the show. Hyderabad FC picked up Akash Mishra from Indian Arrows and the move surely paid off. The teenager became one of the most reliable players for Manolo Marquez and didn’t miss a single minute of action for the nizams. The left-back made 80 tackles, 55 interceptions and 48 blocks, besides adding an assist to his name as well. Headcoach Manolo Marquez commented in a post-match interview that Akash has the capability to become one of the best left-backs for the country.

Liston Colaco was another impressive player for the Nizams. The Goan forward joined Hyderabad FC in the winter of 2020 and he started the season on a high. He mostly came in as an impact substitute and his presence brought flare into the game of Hyderabad. Blessed with the ability to play at various positions, Manolo Marquez used him as the go-to player whenever his team needed the most. With 2 goals and 3 assists, Liston surely set the stage on fire for Hyderabad.

Both Akash’s and Liston’s performances earned them a call to the national side.

Hyderabad FC’s coaching and management staff deserve a lot of credit for the rise of their youngsters. Time and again, Manolo Marquez was seen heaving praise for the youngsters, motivating them to do well. Sujay Sharma, the team’s Director of Football, also deserves a lot of acknowledgement as well for showing faith in these youngsters.

The biggest asset behind Hyderabad’s success was its positive mindset. Hyderabad’s inaugural season in the ISL was a nightmare, yet they bounced back and almost made it into the top-4. After five unbeaten games, in the beginning, the club lost its way losing three games in a trot. Yet they showed their positive mentality and has been unbeaten ever since, 12 games in a row.

In a particular match against ATK Mohunbagan, Hyderabad FC had to field nine youngsters against the formidable opposition, yet the Nizam boys played their hearts out to secure a draw. Such examples are numerous throughout their campaign.

In a nutshell, Hyderabad didn’t have any particular hero in their story. It was a collective effort by all members team. Almost everyone had equal contributions which made their story a success.