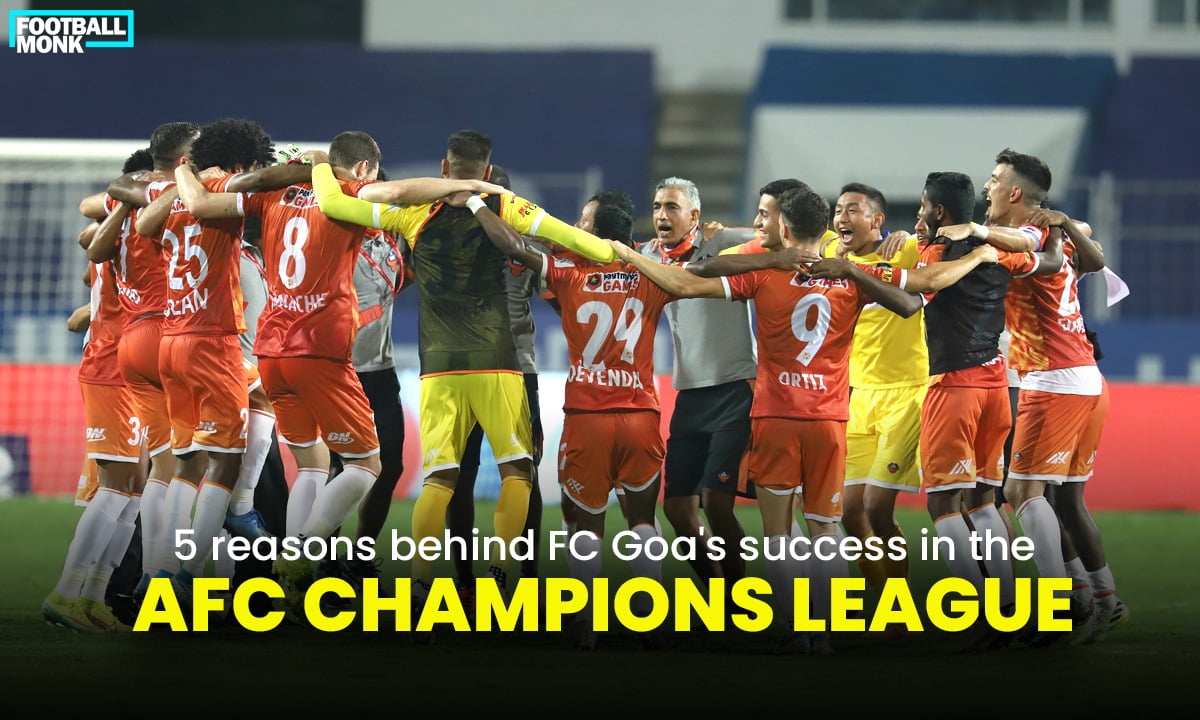 FC Goa entered the history books of Indian football yet again as they became the first-ever club to represent India at Asia’s premier club competition, the AFC Champions League. They played out their skins and gave a strong account of themselves as they managed to finish third in Group E.

The Gaurs changed the existing picture of Indian football from everyone’s mind as the beauty of the beautiful game was up on display. Today, Football Monk takes a look at the five reasons behind FC Goa’s success in the AFC Champions League.

FC Goa undoubtedly houses one of the best domestic contingents among Indian clubs. As the 3+1 foreign players rule came into play in ACL, Goa’s Indian unit had to step up on the occasion and they did so very well.

Adil Khan stepped up whenever he got a chance to play in the midfield. Brandon Fernandes’ creativity and Glan Martins’ maturity with the ball were very crucial for FC Goa against the continental giants. In addition, Seriton Fernandes worked his socks off on the right side of the pitch.

FC Goa and Juan Ferrando had a tough call to make due to the foreign players’ policy of the AFC Champions League.
They left out Golden Boot winner Igor Angulo and the player with the most assists, Alberto Noguera for the Champions League as just four foreigners could be registered.

FC Goa went ahead with their Spanish trio of Edu Bedia, Ivan Gonzalez, and Jorge Ortiz alongside James Donachie as he belongs from an AFC-affiliated country. The Gaurs’ foreign unit didn’t just make sure they played their hearts out but helped the Indian boys to get used to the pace of the ACL.

The Gaurs have a great youth setup and have been feeders not just for their first team, but also for the national team. They know how important assets the young guns can be and getting them from the market is also a part of their strategy. Juan Ferrando had a big role to play in getting the best out of the young and inexperienced players at FC Goa.

The emergence of players like Saviour Gama, Devendra Murgaonkar, Sanson Pereira has been nothing less than a fairy tale and an addition to this would be the signings of Ishan Pandita and Dheeraj Singh Moirangthem. Pandita scored five times off the bench in the ISL and words won’t be enough to justify Dheeraj’s performance in the ACL.

The young shot-stopper was marvelous for FC Goa as he recorded 26 saves and two clean sheets between the sticks. In the reverse fixture against Al Wahda, FC Goa fielded six Goans in the starting XI and that itself shows how good their Indian unit is.

Without a doubt, Juan Ferrando is the right man to lead FC Goa and he proved all his critics wrong. It was a bit tricky for the Spaniard to get things right at the beginning of his reign at FC Goa, but time and patience fixed everything. He made the most out of his resources in the ACL and had a plan in place to tackle the best teams in Asia.

Ferrando went ahead with two foreign centre-backs Ivan Gonzalez and James Donachie to handle the attacking waves of the opposition. His side was compact in transitions and while controlling the tempo of the game. The way he instilled confidence into the youngsters and the hunger to punch above their weight was reflected on the pitch as his tactics were absolutely spot on.

The Gaurs were left with a lot of brainstorming to do after their core followed the footsteps of their former boss Sergio Lobera to Mumbai City FC. But, in a tough situation, the Gaurs came back stronger courtesy of their strong scouting system and a genius ‘think tank.’

It was a masterstroke from them to hand Juan Ferrando the hot seat. The Spaniard arrived in India with a huge reputation as he achieved back-to-back promotions with Greek outfit Volos FC. The Gaurs reassembled their philosophy of free-flowing attacking football after few matches and it was a treat to eyes to watch them play.

In a nutshell, FC Goa have set a benchmark for fellow Indian clubs. Indian clubs can follow the Gaurs’ footsteps and learn from how brilliantly they went about their ways.