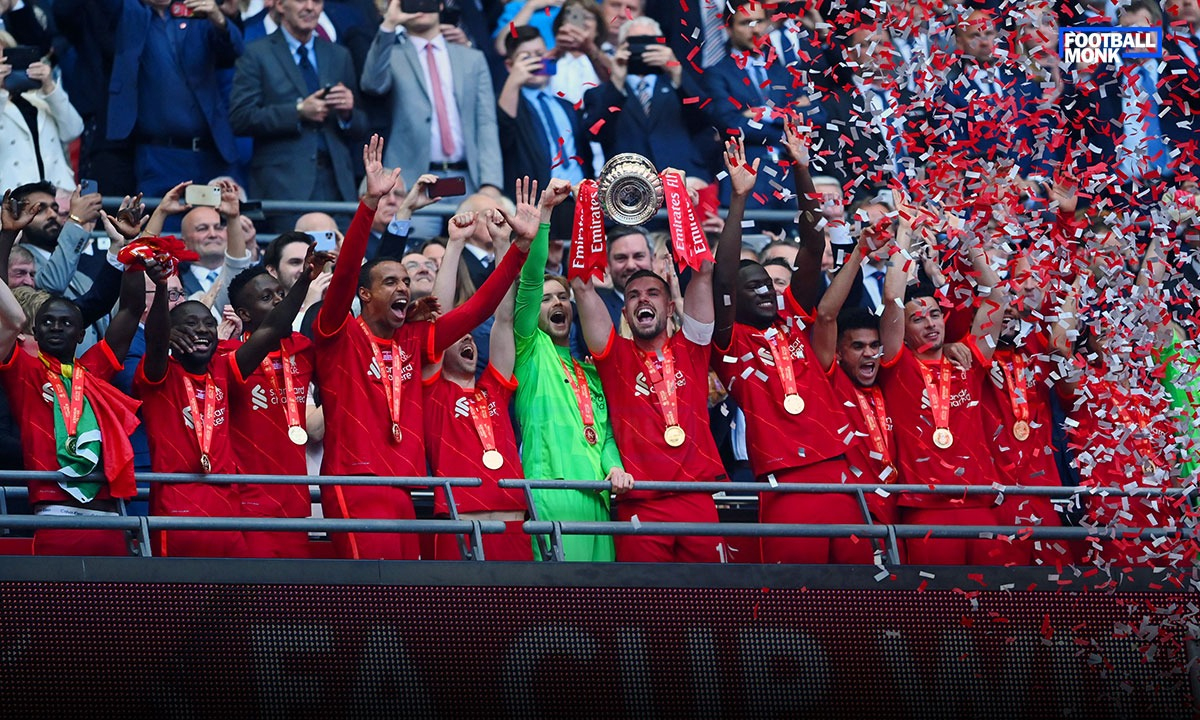 Liverpool has crowned the champions of the 150th FA Cup at the Wembley on Sunday. This is their 8th FA Cup title, equal to Chelsea and Tottenham Hotspurs. The Merseyside club kept their Quadruple hopes alive with this win. Chelsea on the other hand became only the second team to lose the FA Cup final in three consecutive years. The Blues failed to bring the cup home in 2019-20 and 2020-21 as well, losing to Arsenal and Leicester respectively.

Liverpool had a quick start, with their first notable attack coming as early as the 4th minute. Chelsea’s goalkeeper was once again forced to make a save in the 8th minute, however, Keita’s shot was just wide off the target.

Chelsea’s first attack came in the 16th minute when Pulisic’s shot went agonisingly wide. But, it would have counted anyway due to a Lukaku handball in the process. Liverpool kept on piling pressure on the Blues and Mendy was forced to make a quick clearance in the 21st minute from the edge of his box.

The first real attack for the blues came in the 23rd minute. Mason Mount found Pulisic with a brilliant pass but the American shot it wide. Five minutes later, Alonso found an even better chance to score but his heavy first touch let him down. The Brazilian keeper hurried out to clear the ball off his feet.

Liverpool received a huge blow when their talisman Mohammad Salah had to be replaced due to an injury. Diogo Jota replaced the Egyptian in the 33rd minute. The Reds kept the pressure on throughout the first half, but Chelsea was equal to it.

After a goalless first half, both teams were determined to break the deadlock. Chelsea took to initial initiative, with 2 clear chances in the first two minutes of the first couple of minutes. Mason Mount and Pulisic combined brilliantly and found Alonso in the process, who chested the ball down for the shot. But the ball went wide of the mark. In the next minute, the Spaniard found Lukaku who laid off a brilliant pass to Pulisic. But the 23-year old’s shot was brilliantly saved by Allison. A couple of minutes later, Marcus Alonso’s freekick hit the crossbar.

After absorbing a string of shots from the Blues, Liverpool plunged back. Luiz Diaz found the ball in the 52nd at the corner of the D-Box and made a swift turn before pulling the trigger. The shot fizzled past the post, keeping the Chelsea goalkeeper stranded on his ground.

At around the 65-minute mark, Chelsea won a couple of corners in succession. However, they couldn’t convert any one of them. In the next minute, N’Golo Kante replaced Mateo Kovacic, who did an excellent job so far.

The game’s pace slightly slowed down hereafter, with both teams deciding to safeguard their goal first. However, it didn’t take much time to spring back to action. Luiz Diaz hit the upright with his thumping shot in the 83rd minute. When Liverpool fans started to feel its not their day, Andrew Robertson hit the post, further raising the tension levels of the Reds.

Hakim Ziyech replaced Lukaku in the 85th minute. Both teams saw each other off till the 90th minute and let the game roll into extra time.

With no goals separating the two giants of English football, the game rolled into extra time. Ziyech felt a push from Konate in the 95th minute and went down inside the penalty box. But the referee overruled the penalty appeal.

Roberto Firminho replaced Luiz Diaz in the 98th minute. The latter had been excellent so far in the game, but now it was time for some fresh legs. Both teams looked weary at the end of the first part of extra time.

Early in the second part, Ziyech once again appealed for a penalty. Alexander-Arnold definitely pulled his shirt slightly, but since it was outside the area so the referee didn’t seem interested. Both teams ended the extra time cautiously, without taking any extra risks.

The last time when the FA Cup went into the penalties, Liverpool emerged as winners. This happened way back in 2006, with ex-Chennaiyin defender John Arne Riise taking the winning shot.

Tonight, Marcus Alonso stepped up to take the first penalty and scored. Milner opened the account in the penalties for Liverpool. César Azpilicueta missed the next penalty, giving the Red a slight edge after Thiago put it in the net.

Ross Barkley and Reece James didn’t fail to score the next two penalties for Chelsea. Roberto Firminho and Trend Alexander-Arnold were equally up to the task for the Reds.

Ziyech scored the first of the sudden death, and Diogo Jota equalised. Mason Mount, who had an excellent evening, failed to slot home the 2nd shot of the sudden death, leaving Liverpool with a massive advantage. Konstantinos Tsimikas didn’t miss his mark and helped his team clinch the prestigious title.