EXCLUSIVE: “I am sure I can win the ISL with Bengaluru FC” believes Rohit Kumar 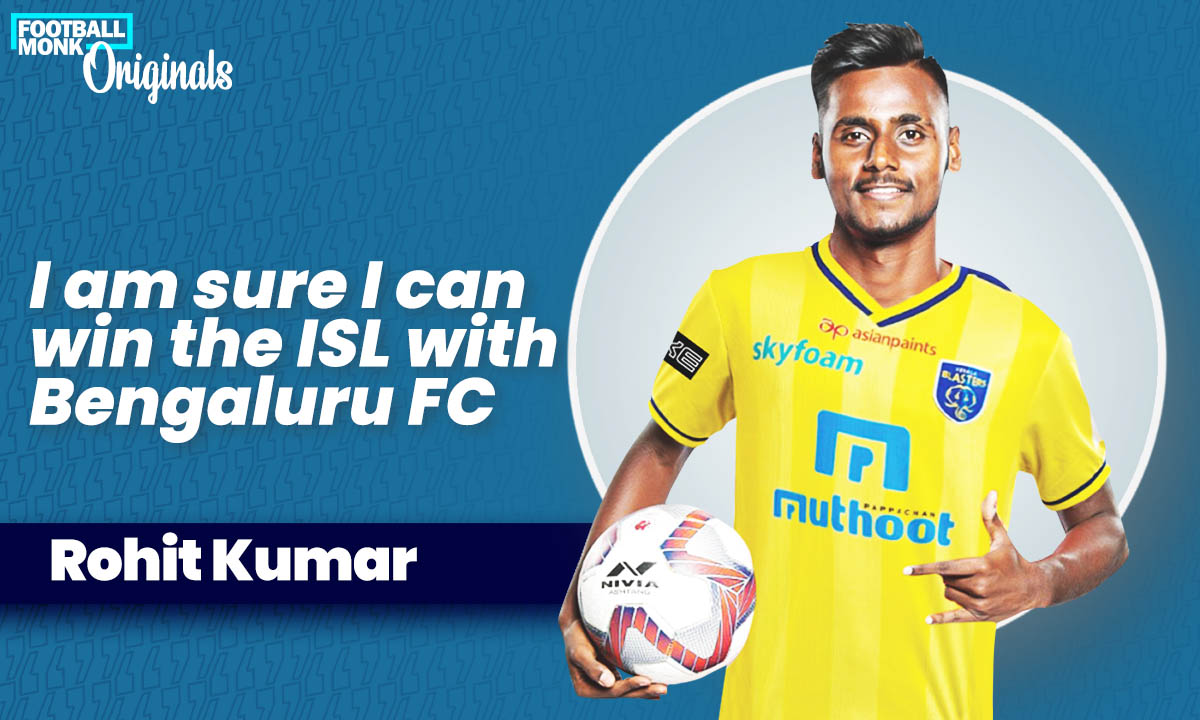 Last week former Indian Super League champions Bengaluru FC announced the arrival of Rohit Kumar from Kerala Blasters. The 24 years midfielder joined the Blues on a two-year deal. Football Monk got into an exclusive interview with the Delhi lad as he shared his thoughts, expectations, and more ahead of the upcoming season.

Quizzed on his take after joining Bengaluru FC Rohit said, “I feel privileged and happy to sign for one of the biggest clubs in India and Asia”. “I can’t wait to meet my teammates and start my journey here with Bengaluru FC”, he added.

Rohit had a fair enough campaign with Kerala Blasters last season. “It was an easy decision to sign with Bengaluru FC”, said Kumar while speaking on switching sides. He believes “This club has a winning mentality. They always fight until the end. And I am sure I will get better as a player here”.

Sharing the reason for choosing BFC as his next career destination, he said, “You want to be part of a team that is constantly competing for titles. And BFC have shown in the last few years that they are a club with high ambitions”

Bengaluru FC are currently on a mission to rebuild their whole squad. Last season the Blues failed to grab the playoff spot. Thus the Bangalore-based side is gearing up to revamp their lost glory. BFC this time has added a lot of depth in their midfield position. Thus Rohit Kumar has to compete with some of the best in business to make his way up to the starting XI.

Speaking on this challenge and the competition Rohit said, “In every team, I have played with, I had competition for my place. As a professional, you have to work hard and fight for your place every single day”. He further went on to say, “It’s good to have healthy competition in the team. I think that’ll only help me grow and improve”.

Playing aside some of India’s Best

Alike any other player, Rohit also seemed pumped up on the fact of sharing dressing rooms with Sunil Chhetri and Gurpreet Singh Sandhu. Kumar said, “I have played against Sunil bhai and Gurpreet bhai several times in the last few years. But It will be an honor to share a dressing room with them now”. “They are leaders of the game and I am looking forward to learning everything I can from them”, he added.

BFC is all set to play in the AFC Cup 2021. This comes up as a chance for Rohit to debut at the continental stage. He thinks, “It will be a good experience to play in the AFC Cup before the ISL. As a professional footballer, you always want to take part in continental competitions. And I’m really looking forward to it.”. He also gave an insight into his plans ahead of the season. “My job is to work hard every day, give my 100% in all training sessions, and be professional on and off the pitch”.

Expectations ahead of the Season

Rohit seemed quite confident regarding his expectations ahead of the season. As he said, “I have made this move because I am sure I can win the ISL with BFC. Along with every other trophy, we will be competing for. He further told, “I am aware that the club has gone trophyless for two seasons now”. “And I want to be able to play my part in changing that”, he averred. Lastly, Kumar believes, “This is a fresh start for me and I want to make it a successful one for both the team and for myself”.