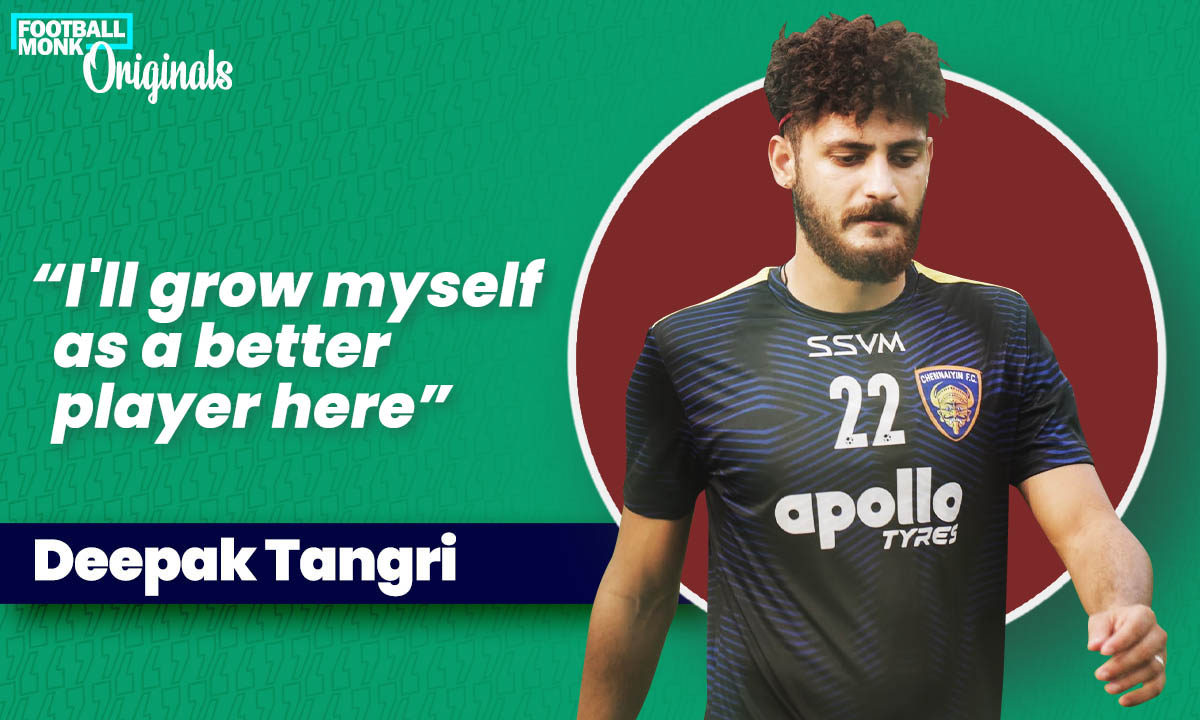 ATK Mohun Bagan recently announced the arrival of young defender Deepak Tangri from Chennaiyin FC. The 22-year-old will play for the Mariners in the upcoming season. Football Monk got up close and personal with the Punjab lad as he shared his goal and expectations ahead of the next season.

Speaking on his homecoming at the Green and Maroon, Deepak spoke about his long wish to play for the Mariners. He seemed quite excited as he said, “It’s an amazing feeling to return back to Kolkata. I was there (in Mohun Bagan AC) before and it was my dream to play for the senior team”. “And now I have got the opportunity and I will give my best for this club”, he added.

Choosing Bagan As the Next Career Destination

Tangri had a prolific campaign with Chennaiyin FC last season. He made 17 appearances for the southern side last season, playing a crucial role in the middle of the park. Thus the 22 years old certainly attracted scouts from various clubs. But it is ATK Mohun Bagan where Tangri committed his future.

Quizzed about this future career destination, Deepak replied, “It’s a big team, and every season they play for winning the title. Thus it’s always the best option to join such a strong and competitive side”. “Besides there are many senior players like Sandesh Paaji, Pritam Kotal, and Tiri in the tea. So, I’ll also be able to learn from them”, he averred. Deepak believes, “with time, I’ll grow myself as a better player here at ATKMB”.

On Competing with the Country’s Best

Although a top competitive side like ATK Mohun Bagan is best for development, it comes with certain challenges.
With top brass defenders like Sandesh Jhinghan Pritam Kotal, the current mariner’s squad has a lot of options in their defenders. Thus Deepak Tangri has to compete with some of the best in business to make his way up to the starting XI. Speaking on this challenge and the competition Tangri said, “Obviously, there is a tough competition. But I believe in my hard work. And we will play according to the Coach’s plan. I will give my best in the training and try to be in the team, to be in the first eleven.”

You May Like: ISL: What Deepak Tangri’s inclusion means for ATK Mohun Bagan?

Expectations as a team

The Kolkata giants finished second on the league table last season. They also lost the final to Mumbai City FC. With their competitive nature, there’s no doubt, they will be back for the silverware in the upcoming season. Tangri resonated with the same philosophy while asked about his expectations. He said, “We will go for winning the title. Two years ago, I played in the final against ATK and lost that night. Now, I want to win the title with ATK Mohun Bagan”.

Message for the Fans

Although Deepak’s signing made a buzz on digital platforms, it was hardly celebrated in real life because of the lockdown protocols. So, here’s a message for the fans from the new Mariner: “For the fans, I can say that we will be in the bio-bubbles. So, we will miss them. But we will give our 100%. And we will also try our best to win the AFC Cup as well.”

Deepak will join the team way ahead of the beginning of the ISL season. As ATK Mohun Bagan is set to compete in the upcoming AFC Cup group stage matches. Thus this will come up as an opportunity for Tangri to make an impact on the team. “We have to perform well in the pre-season. And with the AFC tournament, it will be an added advantage for us to season ourselves”, said Deepak while sharing his thoughts on the AFC campaign ahead. He further added, “I am planning to train hard and get into my best shape. This will definitely be my opportunity to earn my place in the team.” before he signed off.