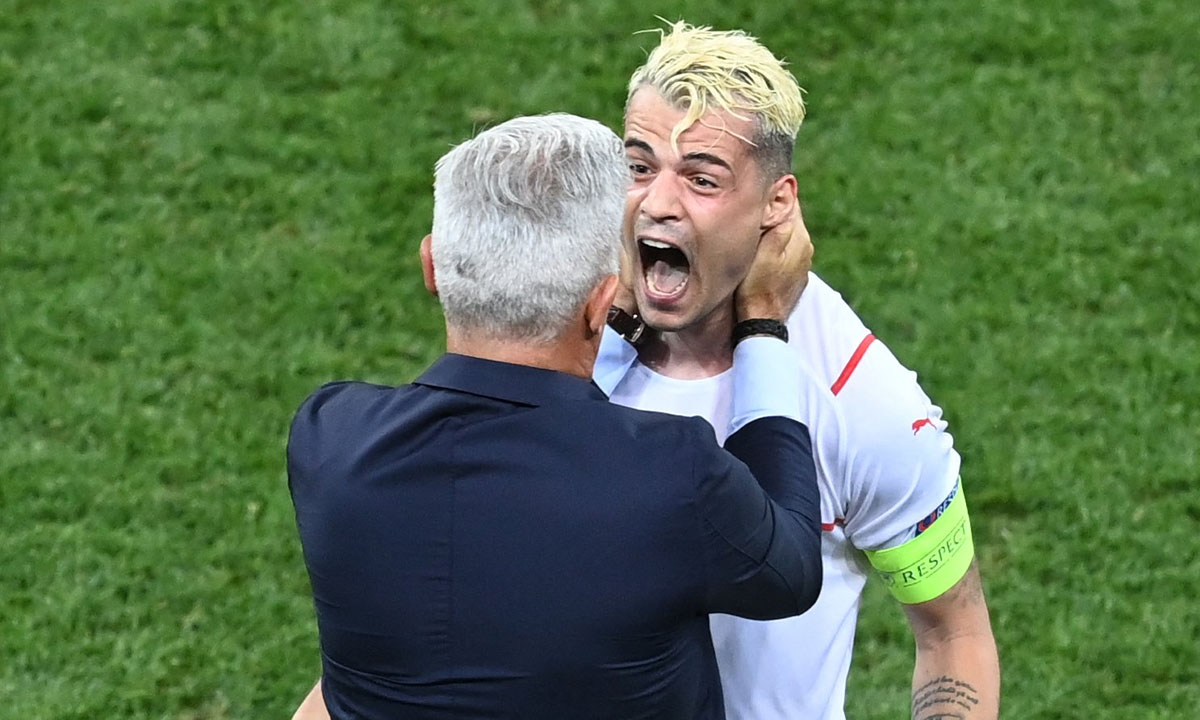 Football Monk takes a look back at the superstars from the Pre-Quarter Finals stage of the EURO 2020 competition; here, we will look closely at eight players who decided the fate of their nations in the Round of 16s. The third name on the list is Swiss captain Granit Xhaka. He led his nation to a historic victory over the World Champions in the RO16 of UEFA EURO 2020.

Xhaka started his youth career at the homeland club, FC Concordia Basel. Later on, he moved to the most successful side in Swiss Premier division FC Basel back in 2002, at the age of 12. There he spent 8 years with the youth team and prepared himself for a professional career.

In 2010, at the age of 18, Granit broke through into the senior squad. He played 2 seasons for FC Basel, making 42 appearances. Scouts from all over Europe had a keen eye on the young talent. As a result, Borussia Monchengladbach signed him in 2012. Xhaka spent 4 seasons for the German Giants and made 108 appearances.

One of the greatest footballing minds of all time, Arsene Wenger became interested in Xhaka. That led to the signing of him to Arsenal Club in 2016. And after 5 years at the North London club, Xhaka has become the captain of the team. He has made 161 league appearances for the Gunners, scoring 9 goals. During this tenure in London, Xhaka has won two FA Cup titles with the Gunners (2017, 2020).

Arsenal had a positive start to the 2020-2021 season. They played the Community Shield match against Liverpool, thanks to their FA Cup win in the previous season. Although, things didn’t go as planned for them later on. Arsenal finished on the 8th spot in the Premier League table at the end of the season. Xhaka couldn’t make an impact either. His only goal came as a direct free kick in the 3-1 victory over London rivals Chelsea FC.

Playing for the Swiss national team

Xhaka has provided his services to the national team from a very early age. He has continuously involved in U-17, U-18, U-19 and U-21 squads of the national team respectively. Although, Xhaka made his debut for the senior squad in 2011, while he was at Basel. Up until now, he has made 98 appearances for the Swiss national team, scoring 12 goals.

Switzerland had a tough start in the group stage of the EURO 2020. Their first match ended in a 1-1 draw against Wales. Then they were thrashed by one of the tournament favourites Italy in a 3-0 defeat. Although, Xhaka led that team to an instant comeback in the next game against Turkey. Swiss won that game 3-1 thanks to a brace from Xherdan Shaqiri. This victory ensured their spot in the Round of 16.

Although they probably had the hardest draw for them. Swiss had to face the current World Champions, France. With the star-struck squad, the French were expected to win the tournament, let alone win that match. Yet the Swiss faced the Goliath and came victorious as David.

Late drama of that night

Switzerland had an early lead thanks to a brilliant header from Haris Seferovic. France came back stronger. With two quick goals from Benzema on the 57′ and 59′ and Pogba’s long-range strike on 75′, France found themselves in a comfortable position. Although, Swiss players had other plans. Another super headed goal from Seferovic on the 81′ gave them hope. And finally, Gavranovic’s 90th-minute finish from Xhaka’s assist made the scoreline 3-3.

After a conservative half an hour of extra time, it all came down to the penalty kicks. Xhaka was seen inspiring his team and encouraging them towards glory. After all, as they say, it was written in the stars. Mbappe missed the fifth penalty and Switzerland went through with a 5-4 win in the shootout. At the moment of victory, when all his teammates were celebrating with the fans, Xhaka was seen running towards Vladimir Petkovic, who has been their coach since 2014.