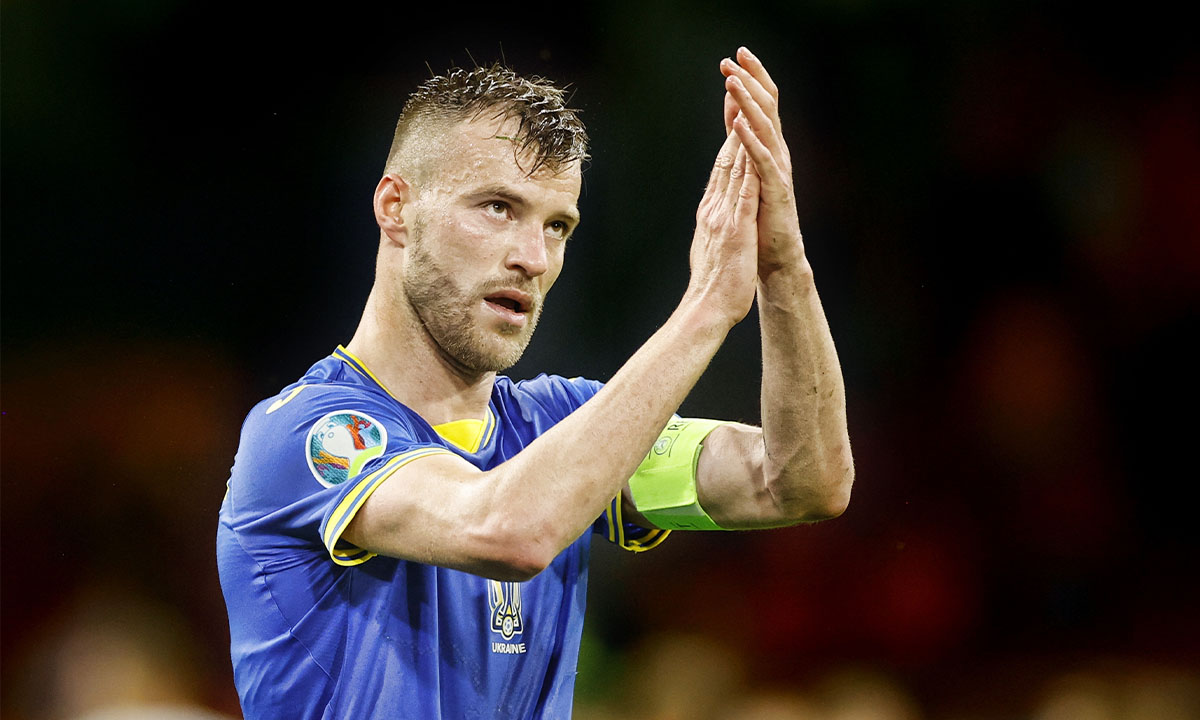 Football Monk takes a look back at the superstars from the Pre-Quarter Finals stage of the EURO 2020 competition; here, we will look closely at eight players who decided the fate of their nations in the Round of 16s. The fourth player on our list is Ukraine’s target man Andriy Yarmolenko.

Yarmolenko was noticed by the coach of the football school of the Chernihiv Youth Sports School “Yunist”, Mykola Lypoviy and invited him to join their ranks. He joined Dynamo Kyiv’s youth academy at the age of 13. But was unable to live up to the training demands. After returning from Kyiv, he graduated from Yunist Chernihiv after spending a couple of seasons. He took the first step of his senior career and joined Desna Chernihiv.

In 2006, Yarmolenko inked down a five-year contract with Dynamo Kyiv and joined their reserves side. After a couple of seasons with Dynamo-2, he was promoted to their main team. He scored the winner in a 1-2 victory away at Vorskla Poltava in his debut match, earning widespread praises.

The striker not just became an influential figure in the squad, but also won the ‘club legend’ tag for himself. Yarmolenko was a part of Dynamo’s squad for 10 consecutive seasons from 2008 to 2017. He made 340 appearances for the Ukrainian champions across all competitions. His tally at Kyiv accounts at 137 goals. His impressive numbers also include 90 assists. Andriy’s exploits for Dynamo earned him the nickname of his idol “new Andriy Shevchenko” by the fans. During his reign with Kyiv, he won all the domestic silverwares. These include the Ukrainian top-flight thrice, the Ukrainian Cup twice, and the Ukrainian Super Cup thrice.

Move out of Dynamo Kyiv

In 2017, big European clubs knocked on Yarmolenko’s door for a potential move to the elite circuit of football. German giants Borussia Dortmund sealed the signing for the target man after they let go of their French international Ousmane Dembele. But, luck was not in his favour as things took a harsh turn at Dortmund. A lot of fitness issues meant he did not feature much on the pitch. He scored 6 goals and provided 6 assists in 26 appearances for the Black & Yellows.

As the tables turned for Yarmolenko, a change in scenery was much needed. Dortmund put him on the market after a disappointing season and an offer arrived from West Ham United. They paid 25 million euros for the transfer before the start of the 2018-19 season. However, the start of life at the Premier League wasn’t easy. He was ruled out for the 2018 season after spending two months in the English top flight. In his last 3 seasons in England, Yarmolenko has scored 10 goals in 54 outings across the competitions.

It was a topsy-turvy season for the 31-year-old in England. He made 24 appearances for the Hammers across 5 competitions. In those 24 outings, Yarmolenko had 8 goal contributions which include 3 goals and 5 assists. He wasn’t able to play for some part of the season after he contacted Covid-19 on international duty in the first international break of the season in November 2020.

Yarmolenko was called up to represent the Ukraine U-19 team in an exhibition match against Asian Giants Japan where Ukraine emerged victorious. He was also a part of Ukraine’s squad for the 2008 UEFA European Championship qualifiers. After helping the U-19 team qualify for the 2008 European Championship, he received a call-up to join the U-21 squad to face the Netherlands. Later, he participated in the qualification and finals of the 2011 UEFA European Under-21 Football Championship.

Yarmolenko made his senior national team debut for Ukraine at the 2010 FIFA World Cup qualifiers against Andorra in 2009. He scored on his national team debut in a 5-0 victory to Andorra. On 2nd September 2011, Yarmolenko wrote his name in the record books when he became the fastest Ukrainian to score a goal. It took him just 14 seconds to break the deadlock against the Uruguayans.

In the qualifiers of the 2016 European Championship, Yarmolenko netted his first national team hattrick in a 3-0 win against Luxembourg. He sealed a group stage berth for Ukraine after scoring in Ukraine’s 3-1 victory over Slovenia in the final round of qualifiers of EURO 2016. But, Ukraine had a very anticlimactic campaign at the 2016 European Championship. They failed to open their scoring account and finished at the bottom of their group.

After a below-par domestic campaign with the East Londoners, Yarmolenko has silenced all his critics on the international stage for Ukraine. Andriy boasts the record for the most goal contributions in Ukraine’s current squad so far. The versatile forward has featured in all of Ukraine 4 games and has racked up a total of 2 goals alongside 2 assists. His last goal contribution was an out-footed assist for Zinchenko against Sweden. That helped Ukraine open the scoring in the RO16. His most imposing performance came against debutants North Macedonia in the group stages. In that game, he won the man-of-the-match for his opening goal and the assist for Ukraine’s second goal.

Apart from his attacking prowess, Ukraine’s skipper maintains an impressive passing accuracy of 81% per game. He has also averaged 45 touches per game. He’s a keen dribbler and possesses a successful dribbles rate of 67%.