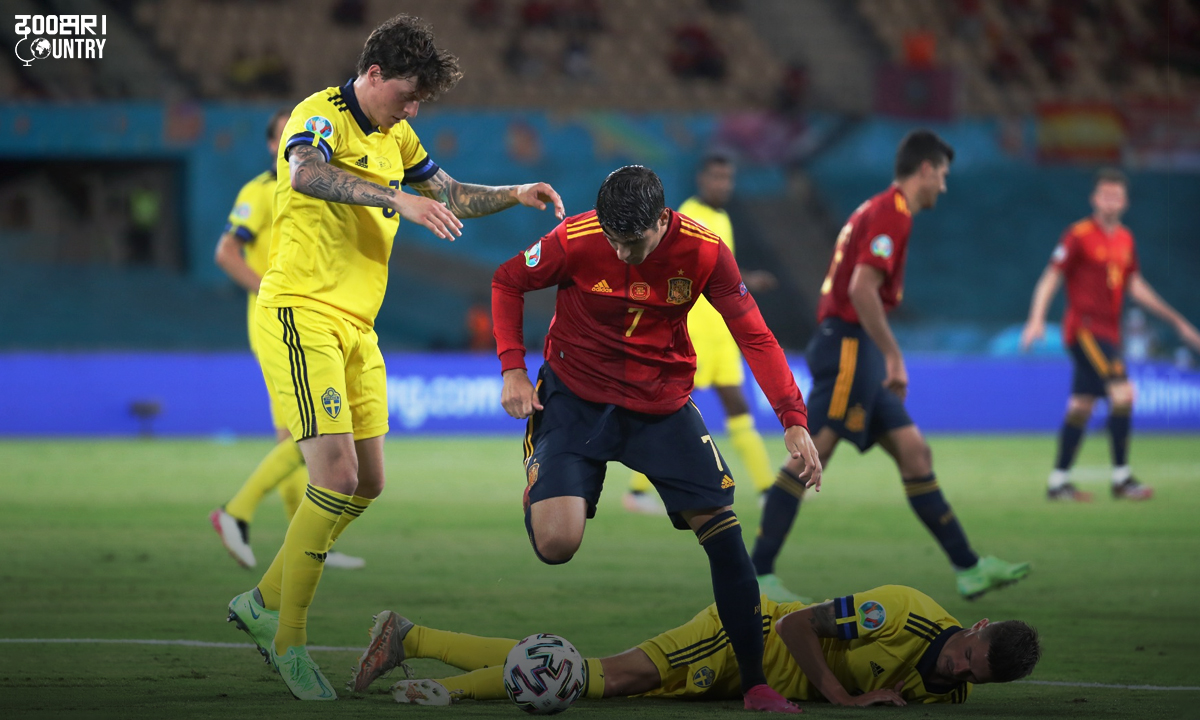 Sweden added one more point to their H2H record against Spain as they bagged in a goalless stalemate against the hosts in an entertaining match from the EURO 2020. In spite of keeping the bulk of possession, the Spanish side failed to open their scoring books as Swedish Custodian Robin Oslen stood tall with his heroics. Football Monk comes up with the five talking points from the match.

Spain took the control of the Joystick

Spain started off the game with sheer dominance. As they kept the victors almost confined to their own half letting them only play a few balls upfront. It was one-way traffic till the break as Spain maintained more than 80% of the possession hovering on Koke Llorente and Ferran Torres’s prolific square pass display. Sweden on the other hand let the hosts play a lot of touches in the box helping Spain to take full control of the game. In spite of getting so many chances upfront, the Luis Enrique managed side failed to find their shooting boots. As Morata continued to make silly misses along with Dani Olmo.

Though Spain maintained their authority all across the pitch it was Swedish Custodian Robin Olsen who made sure it was not a party day for the hosts. The years-old keeper maintained a terrific form tonight as he continued to decline each and every ball coming on his way. Starting from the very first quarter of the game The keeper made some sure saves starting with Dani Olmo’s goal-bound shot in the 15th min. He continued to be a wall hard to overcome with 3 saves all through the game.

Isak inches away from winner

Sweden got very few scoring chances in the game. But the best one came just before the break in the 41′ min when Alexander Isak made a solo run making the Spanish defenders standing still. It was the woodwork that saved the day for the Spanish custodian as he was almost beaten.

Spain made 15 shots out of which only 4 were on target portraying the poor accuracy that Enrique managed side brought forward tonight. Morata’s scoring woes further spoiled things for the three times EURO champions as he seemed lacking his scoring gears. Though the Spanish gaffer made few changes in the attacking third and went for a false nine, things didn’t change. As the host continued to find it hard to send the ball to the back of the net.

Sweden seemed to be the happier side as they almost passed their mission by retaining a clean sheet against mighty Spain and bagging a point home from their first EURO 2020 encounter. On the other hand, it was a bitter occasion for he host as they failed to bag full points from their first game. The lack of goal scoring capabilities will be another point of worry for the Enique managed side. Who are being considered top contenders going into the next stage.