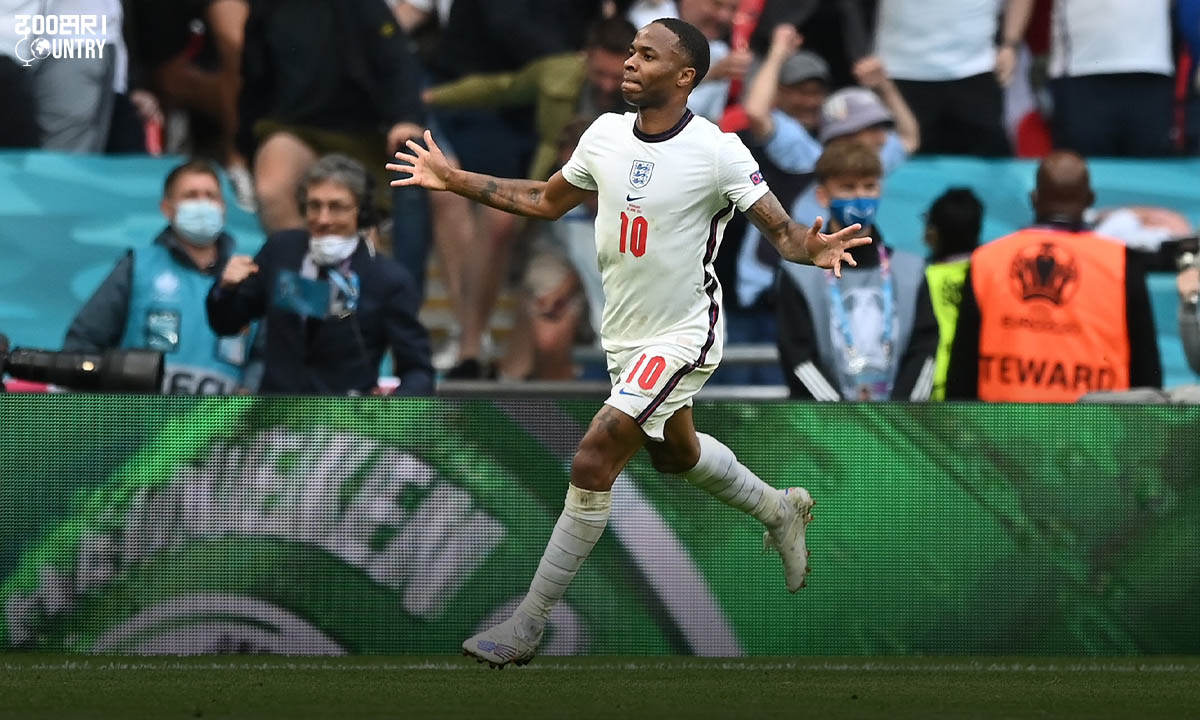 Football Monk takes a look back at the superstars from the Pre-Quarter Finals stage of the EURO 2020 competition; here, we will look closely at eight players who decided the fate of their nations in the Round of 16s. The second name on the list is Raheem Sterling, the 26-year-old English forward who has delivered on almost every occasion so far. Raheem Sterling has been the star performer for England in the UEFA EURO 2020. He has led the Three Lions to the Quarterfinal spot after defeating Germany on their home turf.

Brought up near the Wembley stadium in London, Sterling always dreamt about playing for England in that history stadium. And as his career has formed over the years, now he is an indisputable member of the English national team.

Sterling joined the academy of Queens Park Rangers at the age of 10. There he developed as a lethal winger before joining English Giants Liverpool in 2012. The three years spent in Anfield was another step towards supremacy for the English forward. Though his numbers weren’t very impressive the potential was eminent. Naturally, it didn’t go unnoticed by the scouts of other teams. As a result, Manuel Pellegrini’s Manchester City signed him in 2015 with a massive transfer fee of £44 million. From there on, Sterling never had to look back.

One season later, he was joined by one of this generation’s greatest masterminds, Pep Guardiola. Together they achieved wonders for Manchester City FC. They have won three Premier League trophies in the last four years. During the 2017-2018 season, Manchester City won the league with 100 points on the table. They became the first English team ever to reach three figures in a season’s points table. Manchester City has also won the last four editions of the EFL Cup (aka the Carabao Cup) during this period.

Raheem Sterling developed himself as a player as well. Previously he was a skilful winger with lots of finesse. Now he is a reliable goalscorer. He can play as an inverted winger or as a no.10 or even as a lone striker in front. He has scored 78 goals in his 195 league appearances for the Sky-blue side of Manchester.

When an elite forward like Sterling go into a new season, there’s always extra pressure to keep his standers at the same level as the previous ones. Sterling had scored 18, 17 and 20 league goals in his last three seasons respectively. Naturally, the expectation was sky high going into the 2020-2021 season. Although he couldn’t meet those numbers.

Sterling scored a total of 10 league goals last season. English winger Phil Foden’s emergence as the new face of Man City’s attack didn’t help Sterling either. As a result, he was dropped from the first eleven in crucial matches at the business end of the season. Although, he started the Champions League final against English rivals Chelsea FC; he was unable to impress in that match. As a result, Chelsea FC went on to win the elite European trophy whereas Manchester City’s dreams were dashed.

Many critics weren’t in favour of Raheem Sterling starting the tournament. His recent run of form and the emergence of young talents like Jack Grealish and Jadon Sancho didn’t help him either. Although English manager Gareth Southgate stuck to his basics and played Sterling in every match of the EURO 2020 so far. Southgate got the result for his trust as Sterling has been the key difference-maker for England in Euros.

Sterling has scored three of the total four goals from England so far in the Euros. All three of those turned out to be match-winners against Croatia, the Czech Republic and Germany respectively. Even after scoring the only two goals for England in the group stage, critics and pundits wanted him replaced for the round of 16 ties against Germany. Although, the boy who grew up near Wembley went on to score the winning goal for England on Tuesday. This was England’s first-ever victory over Germany in a major tournament after the 1966 World Cup Final.