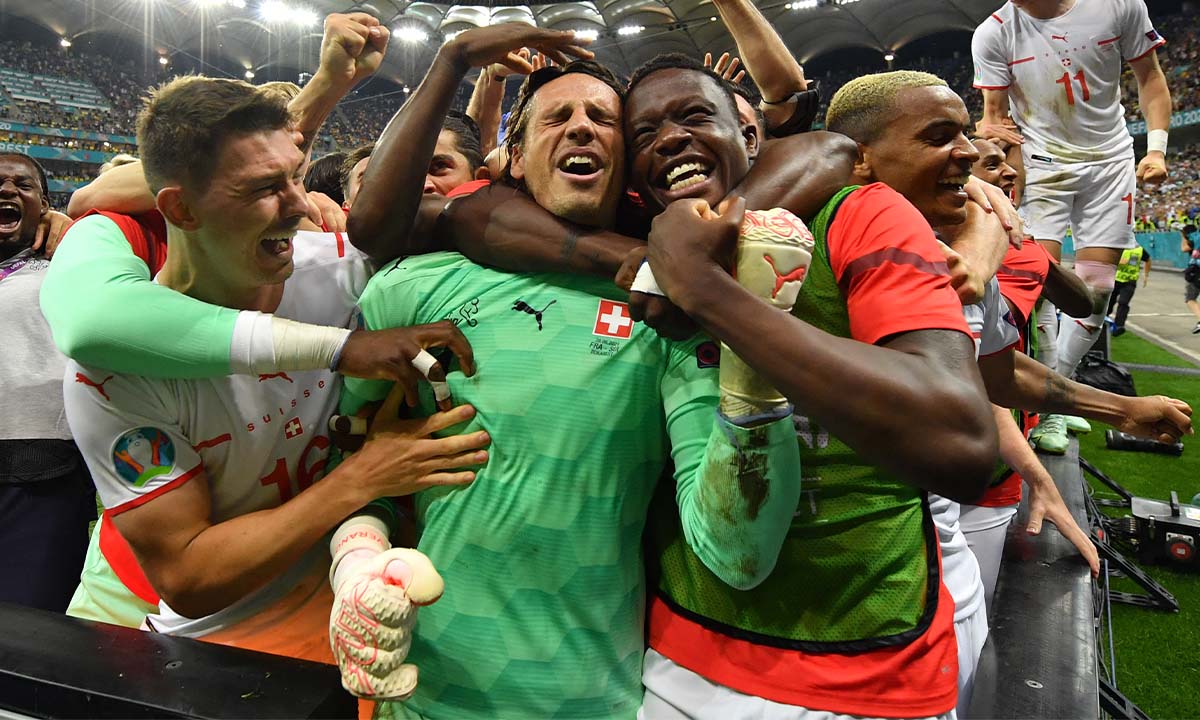 Switzerland caused a major upset in EURO 2020 as they knocked out world champions France in Bucharest. The match ended 3-3 after extra-time as the Swiss came out on top 5-4 in penalties. Football Monk takes a look at the five focal talking points from the match.

Both the teams started off on an attacking note with Rabiot and Zuber providing much-needed width for both sides. Mbappe was very lively with his pace and dribbles in the opening quarter of the match. However, the breakthrough came at the other end of the pitch. Steven Zuber’s inch-perfect cross from the left was met by Sefereovic as he out-jumped Lenglet to give his side the lead.

Both Zuber and Embolo created problems for the French down both the flanks. Embolo’s physical presence was too hot to handle for the French defenders as he created openings for Seferovic and Shaqiri upfront. Zuber was lively on both halves of the pitch, crossing from the left and tracking back to defend against the likes of  Pogba and Mbappe.

It seemed that the French were dead and buried when the referee pointed to the spot in the 54th minute.  Zuber took a marauding run into the box and was hauled down by Benjamin Pavard. However, Ricardo Rodriguez saw his powerful attempt saved duly by Lloris.

This sparked life in the French attack as a quickfire double by Benzema turned the tables on the Swiss. A through-pass from Mbappe was received brilliantly by the Los Blancos forward, who finished it with aplomb. Two minutes later, Griezmann’s cross from the left was headed into the net by Benzema.

Late madness by the Swiss

France took a commanding 3-1 lead in the 75th minute as Pogba curled in an absolute blinder beyond Sommer’s reach. However, there were more twists to come by as Switzerland came back through a Seferovic header. Mbabu hit an absolute peach of a cross from the right flank which found Seferovic’s towering head. The Swiss smelt blood and poured bodies forward in search of an equaliser. They made the French pay for slack defending as Xhaka’s defence-splitting pass down the centre found Gavranovic. The Dinamo Zagreb striker finished it low into the left beyond Lloris’ reach to make it 3-3.

Coman was introduced in the second half to provide much-needed pace down the left. This change reaped rewards as the French got themselves back into the game. While at 3-3, Coman could’ve put France in the quarters but his shot smashed against the post in stoppage time. However, he sustained a hamstring pull in extra time and was forced off for Marcus Thuram. The pace of the game was telling in extra time as both sides tried to cash in. Yann Sommer made an outstanding save at the death to take the game into penalties.

Heartbreak for the world champions

The Swiss captain Granit Xhaka rode his luck and chose to shoot first in the tie-breaker. All the first nine penalties were scored with impeccable ease and the pressure was absolutely mounting with each one. Mbappe was tasked with the job of taking the game into sudden death he needed to score. However, the little starlet couldn’t keep his nerve and shoot too close to Sommer, who saved it brilliantly.