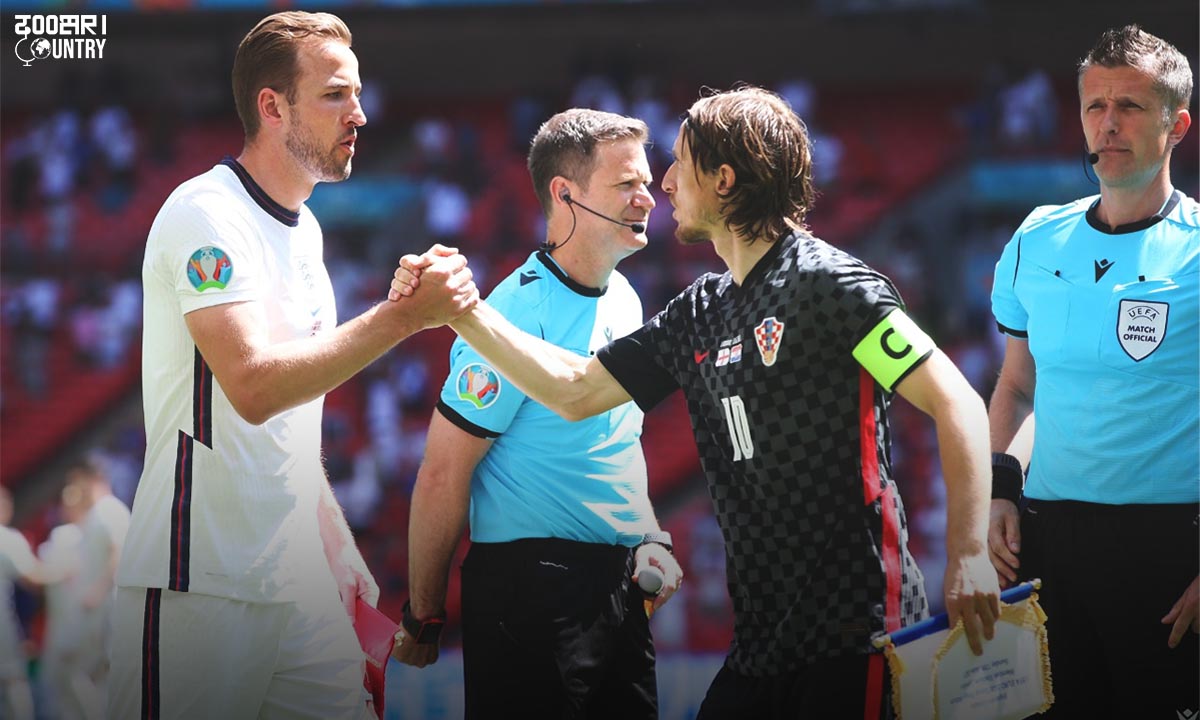 England faced Croatia in the opening match of their EURO 2020 campaign at the historic stadium of Wembley, London. Many anticipated it as the second encounter of a newly formed rivalry between these two footballing nations. They clashed with each other back in the 2018 FIFA WC Semi-final. Croatia made a comeback that night in Russia after England took an early lead through Trippier’s free-kick. But this time England turned the table as they secured their first win of the championship with 1-0 against Croatia.

England had never won the first match of a Euro campaign before in the entire history of the tournament. But a young England team looked desperate to make their talent count on the international stage. On the other hand, the Croatian team with illustrious midfield is nothing to be taken lightly. Football Monk takes a look at 5 talking points from the match.

English National team manager Gareth Southgate has quite a reputation for his conservative style of football. But tonight England looked much more attacking and proactive in order to make things happen. He stared with a back two and two flexible side backs in Walker and Trippier, who can come in the middle of the pitch to increase the numbers of midfielders. UCL winner Mason Mount enjoyed a flexible role of no. 10 where he played one-twos with both the wingers, Foden and Sterling. Whereas Harry Kane played more like a decoy striker.

The former Ballon D’or winner Modric is well known for his abilities with the ball. But even he was acting like a no. 6 in Croatia’s pragmatic way of playing. Both Modric and Kovacic were sitting deep in their half and creating a transition from their penalty box. This approach has certainly limited Croatia’s chances to ask difficult questions to the English goalkeeper Jordon Pickford. Still, Perisic is playing as a mobile attacker, covering a large amount of the ground.

It was highly debated if Sterling should be starting the match. But a line-breaking pass of Kalvin Philips from the top box was enough to shut all those criticisms down. Sterling was right where he needed to be and finished it with finesse. Croatia had to pay the cost for allowing English midfielders to get the ball into those dangerous zones.

Mount living in his dreams

After conquering Europe with his boyhood club, Mount has marked his entry at the international level. He played a free role behind Harry Kane. The 22 years old made an excellent bridge between the defensive midfielders like Declan Rice, Kalvin Phillips and the more attacking wide players like Foden and Sterling. Mason also provided through balls for strikers. Sterling almost found himself clear from a ball in the first half. Mount also provided crucial aerial balls from corners. A second-half free-kick just went over the bar with a narrow margin.

A tie of many record-breakings

It was a shiny day at Wembley with many records being broken. The first occasion since 1992 when no Liverpool or Manchester United players had started a major tournament match for the Three Lions. Although, Red devil’s striker Rashford came on as a substitute later.

It was also the first even occasion when England had won their first group stage game in the European Championship. A crazy record to think about as the nation is widely regarded as the birthplace of modern-day football.