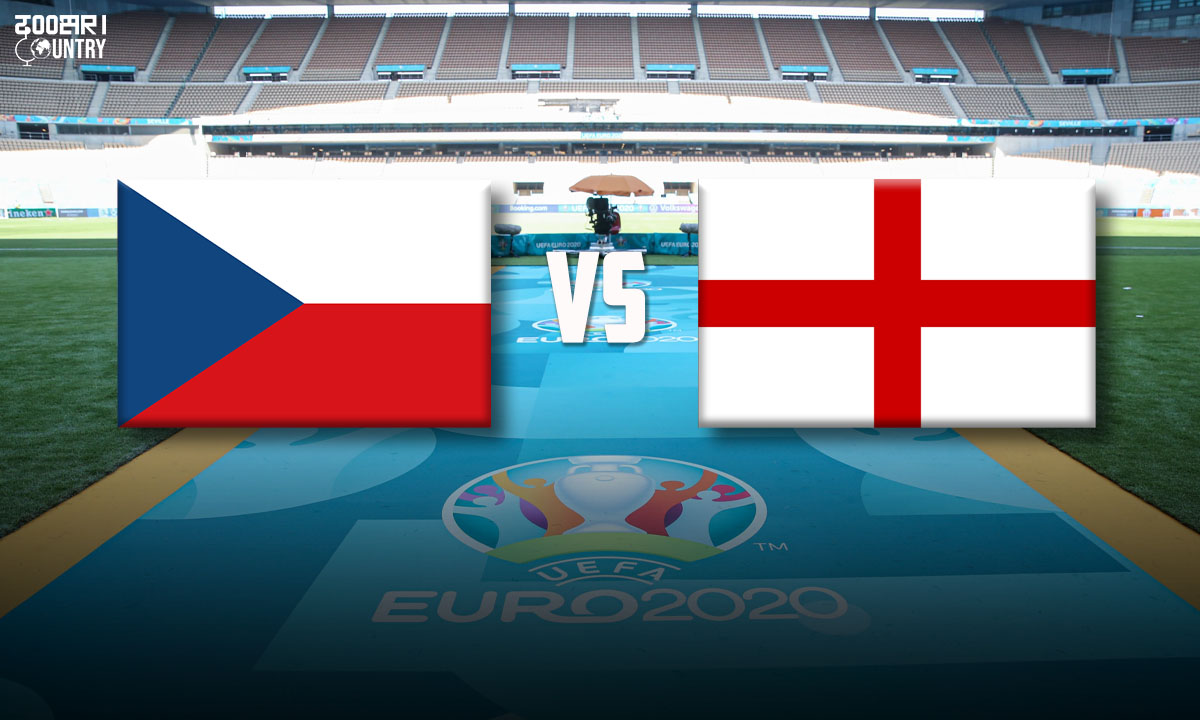 England is going to take Czech Republic in the final game of the Group stage in EURO 2020. Though both the teams have already gained four points from their first two games. The Group D table is still indicating a late turnaround of places. Both the teams will go for a win as it will ensure their spot in the Round-of-16 of the tournament.

England is clearly the favourites going into this encounter. England is currently standing on the FIFA World Ranking on an impressive 4th position, whereas the Czech Republic is placed on the 40th spot. But that will not stop the Czech Republic players from going for a win, in the Wembley Stadium on Wednesday.

The rivalry between these two teams dates way back to the 1930s. The then Czechoslovakian team won a 2-1 victory against the English side in their first-ever encounter in the Stadion Letna of Prague.

Later on, England has played Czechoslovakia 16 times, winning on 9 occasions. England’s first encounter against the newly formed Czech Republic came on 18th November 1998. England won that international friendly 2-0 thanks to the goals from Darren Anderson and Paul Merson.

The most recent encounter between these two nations took place in 2019 in the qualifying rounds of the European Championship. Harry Kane gave England an early lead on the 5th minute of the match from a spot-kick. Although the Czech Republic quickly came back in the match thanks to a 9th-minute equaliser from Jakub Brabec. Eventually, Czech Republic gained the lead by Zdenek Ondrasek’s late goal in the 85th minute and went on to win the game.

• For many Critics, the reason behind England’s boom and bust run is their playing style. England’s conservative game under Gareth Southgate is widely considered as the main reason for which the creative players in the squad are unable to express their brilliance.

• Czech Republic’s Patrik Schick has found himself in the form of his life as he has scored all three goals for the team. This includes the long ranger wonder-goal against Scotland from the halfway line. Thus, his performance can turn out to be crucial in this tie.

• ‘Will Sancho or Grealish start the game?’- That’s probably the main concern for the English fans. Both the wingers have played consistently well in the last couple of seasons for their respective clubs, yet none of them started in any of the two games. Hence, their inclusion can be vital for England’s success going forward.

• Czech Republic are going into this match having an impressive run of form. They have only lost 2 of their last 9 matches and that includes a 1-1 draw against the current no. 1 in the FIFA World Ranking, Belgium. Clearly, they can cause a lot of trouble to the home side with their compactness and quick attacking prowess.

• If England needs to perform well in this tournament, their star striker Harry Kane must deliver according to his quality. He seemed lost in both the matches against Croatia and Scotland. Kane looked much slower than the young teammates around him. The long season with Spurs or because of the lack of correlation between England’s attackers might cause these issues. Whatever the reason is, it’s expected from Kane to get back goal-scoring ability and deliver for his nation as he did in the 2018 FIFA World Cup.

Declan Rice has played his role perfectly as the lone defensive midfielder for the English side as they are yet to concede a goal in the tournament. Naturally, it will be his duty to stop Patrik Schick from getting space in the defensive third and preventing the counter-attacks which Czech players are particularly good at. This battle will determine the outcome of the tie as England’s system heavily relies on its defensive compactness.

The current Bristol City defender Tomas Kalas is well aware of the Englishman’s abilities, as he has years of experience playing in England. Kane has to play as the traditional no. 9 in order to succeed against the Czech Republic. And Tomas Kalas’ ability to mark Tottenham Hotspur’s talisman will determine the attacking threat from the Three Lions.

England and the Czech Republic- both the teams currently have 4 points from their previous matches. A draw will suit them both. With 5 points both of them can secure the qualification for the round of 16 regardless of the result of the other match between Scotland and Croatia. And the current English playing style very much indicates another conservative performance to protect a point in this match. It may not satisfy football purists, but it will certainly satisfy the fans of both nations as they will be heading towards the knockout stages of EURO 2020.