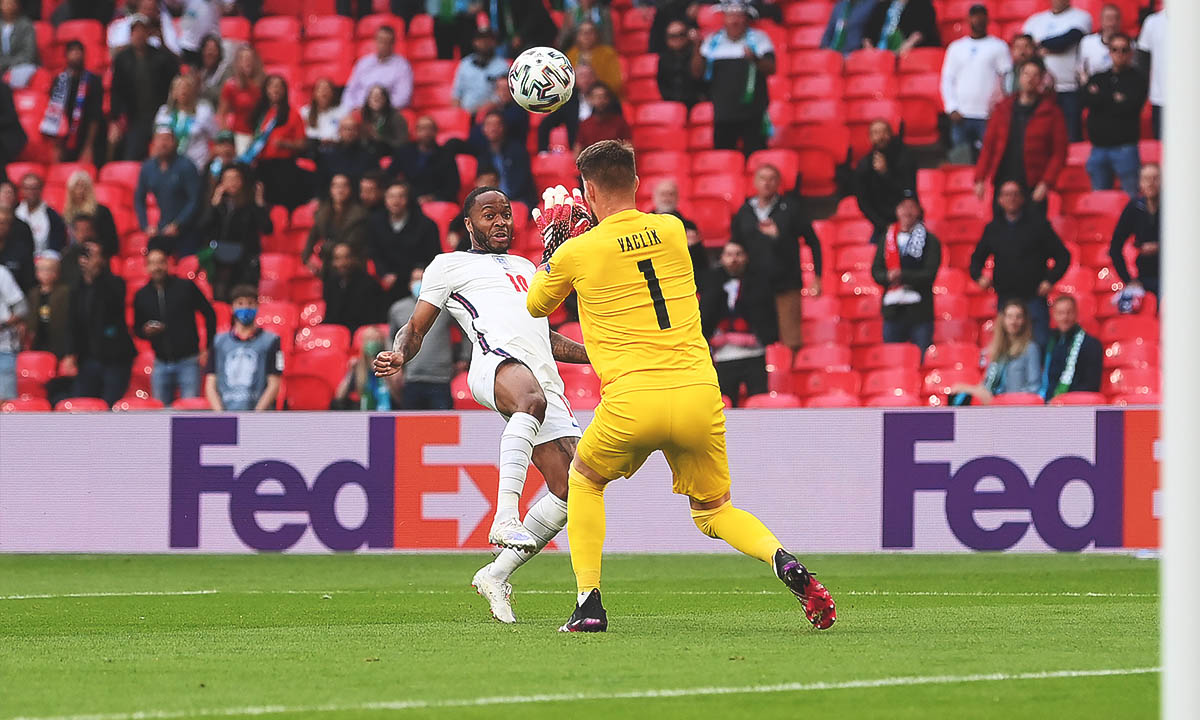 England edge past the Czech Republic with a close 1-0 victory and ensure the top spot of the Group D. Raheem Sterling scores the only goal on the 12th minute as Jadon Sancho gets his first game-time in EURO 2020. Football Monk takes a look at 5 talking points from this crucial tie from Wembley.

It’s always difficult to go into a huge tournament like Euros as a player. Let alone the criticisms and negative opinions around him. Still, Raheem Sterling remains the only goal-scorer for England. His headed finish from a cross played by Jack Grealish gave England an early lead in the game. Although he was unlucky not to score earlier when his chipped ball hit the post from a one-on-one situation against the Czech goalkeeper Tomas Vaclik in the 8th minute.

Star midfielder Mason Mount and left-back option Ben Chilwell had to quarantine themselves because of their post-match interactions with club-mate Billy Gilmour of Scotland. It created a void in the middle of the pitch as Mount played a key role in that position previously. But Aston Villa captain Jack Grealish came in and exceeded all expectations as was flawless with the ball. He also assisted the Raheem Sterling goal in the first half with a cheekily chipped ball from the left flank.

Besides, youngster Phil Foden was also rested for this match. Arsenal’s wonder-kid Bukayo Saka played from the right flank and he was just as good as Foden. The 12th-minute goal was initiated by a solo run of Saka down the right flank.

Cleansheets: A good omen for England

It’s no secret that Gareth Southgate prioritises defensive compactness in this English team. That enabled the English team to keep clean sheets in all of the three matches in the group stage of EURO 2020. interestingly, the last time when an English team kept three clean sheets in a four-team group, was in the 1966 World Cup. Guess what? England went on to win that tournament.

What went wrong with Schick and Czech Republic?

The Czech Republic looked more comfortable when had the opportunity to sit back and make things happen in transitions. They gained four points from the first two matches against Scotland and Croatia in this way. But tonight the circumstances weren’t that favourable. England was happy to let them get into their half, keeping a solid backline. That took away the opportunity for Patrik Schick and his compatriots to get in behind runs and find spaces. And that’s why they couldn’t possess much threat in the attacking third.

What does this result mean?

Czech Republic started the match being at the top of Group D. And they found themselves in the third position after the match. England finished the group stage standing at the top with 7 points. A 3-1 victory against Scotland, helped Croatia to finish in the second spot. Hence, The Czech Republic will have to wait for confirmation. However, they are likely to go through as one of the four top third position teams.