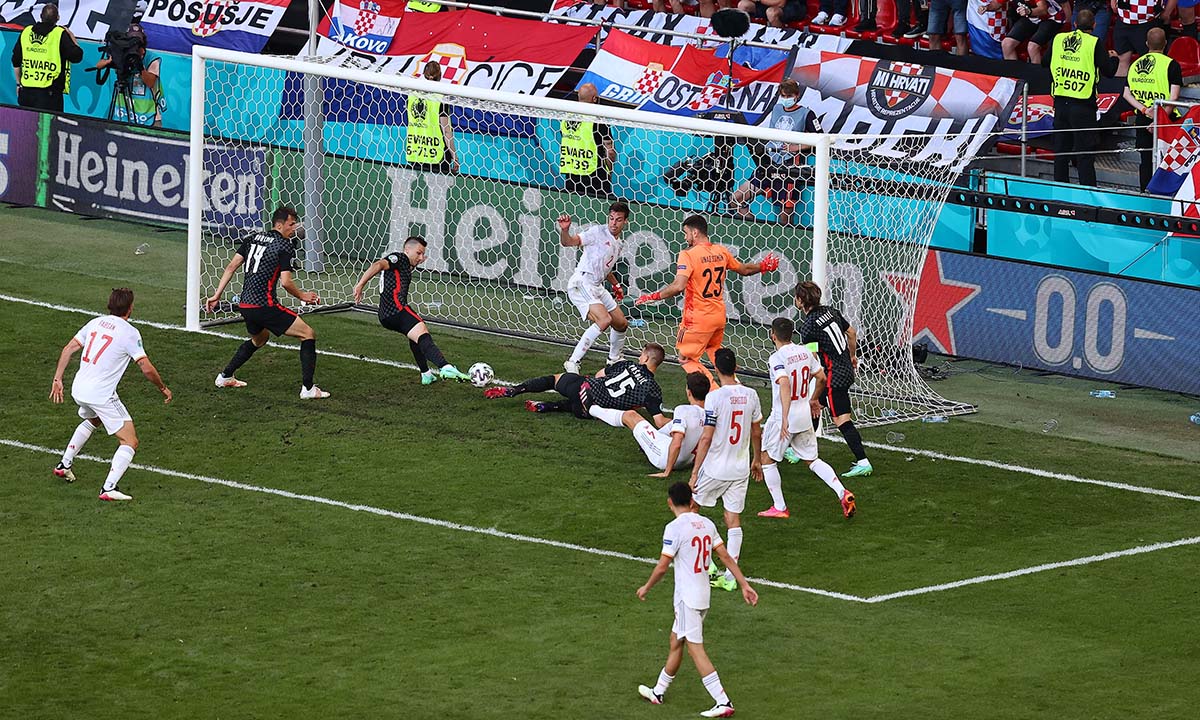 Croatia took on three times European Champions Spain in the Round of 16 ties of UEFA EURO 2020. This major game took place in Parken Stadium, Denmark in this pan-continental tournament. Spain edged past Croatia in the late drama of extra time with a 5-3 victory. This eventful night witnessed many records. As it was the second most goalscoring match ever in the history of the European Championship. Thus, Spain also became the first-ever team to score 5 goals in two consecutive matches in this tournament’s history. Football Monk takes a look at the seven focal talking points from the match.

A comedy of errors

How often players are given the advice, not to back pass to the goalie under the bars. It sounds unnecessary but at times it appears to be fatal. Just like that, a long back pass from Pedri wasn’t properly received by goalkeeper Unai Simon. As a result, Croatia got a lead out of nowhere. Although Unai got his chance of redemption later on in the match. He made some crucial saves late in the second half and in the extra time which secured Spain’s victory.

Spain dominated the possession of the match from the very start. Yet lack of clinical finishing cost them much. Though, after conceding the howler of a goal, they came back with persistence. On 38th minute Spain equalised through a Pablo Sarabia finish. Gaya’s left-footed shot was saved by Croatia’s Dominic Livakovic. However, the rebound was shot into the net by the Paris Saint-Germain forward.

Spain continued to press high going into the second half. That paid off, as Cesar Azpilicueta headed the ball back of the net in the 58th minute. It was the Spaniard’s first-ever goal for the National team and there couldn’t be any bigger occasion for this. The current Champions League-winning captain arrived in the box at the right time to meet a left-sided cross from Ferran Torres and give Spain the lead. Torres, later on, added to the lead a solo run and finish on the 76th minute. Hence increasing Spain’s lead to 3-1.

When we talk about this Croatian team, the obvious names that pop up are Modric or Kovacic. Yet, Brozovic seemed to control the midfield on his own. He was literally everywhere. From tracking down the Spanish forwards to make forward runs – he did it all. Brozovic played the role of a traditional box-to-box midfielder. Most of the attacking threat from Croatia came down the middle of the pitch. Although they couldn’t find the back of the net apart from the first-half howler.

Late drama of second half

Brozovic and the whole Croatia team never lost their hope. Even after going behind 3 goals to 1, they continued their line-breaking runs through the middle of the pitch. That brought them two late goals to finish the regulation time on 3-3. First, a close-range finish by Mislav Orsic, which was given by the goal-line technology. And then an acrobatic finish by Mario Pasalic from Orsic’s cross got the game into the extra time.

Morata has faced a fair share of criticism for his lack of finishing in this tournament. But that chest-receive in the Croatian box and thunderous volley to finish it off- was enough to remind everyone what he’s capable of. Morata’s goal came in the 100th minute in the first half of extra time. 2 minutes later, Mikel Oyarzabal’s clinical finish gave Spain a 2 goal lead going into the half time of extra time. Thus, from that situation, it was almost impossible for Croatia to make a comeback even though they had scored two goals in 6 minutes of regulation time. The fatigue was imminent and hence they weren’t able to possess much threat.

What does this win mean for Spain?

Spain, under Luis Enrique, couldn’t reach the expectations of previous achievements. But in this tournament, Spanish players have shown their character as they have fought as a team. Today’s performance was no exception to that. They came back from an unfortunate error and turned the tie in their favour. Even after conceding 2 quick goals in the last 6 minutes of the added time, they kept their heads calm and finished the job in the extra time. And hence with that win, they will go into the Quarterfinals of the UEFA EURO 2020 with a new level of confidence and self-belief.