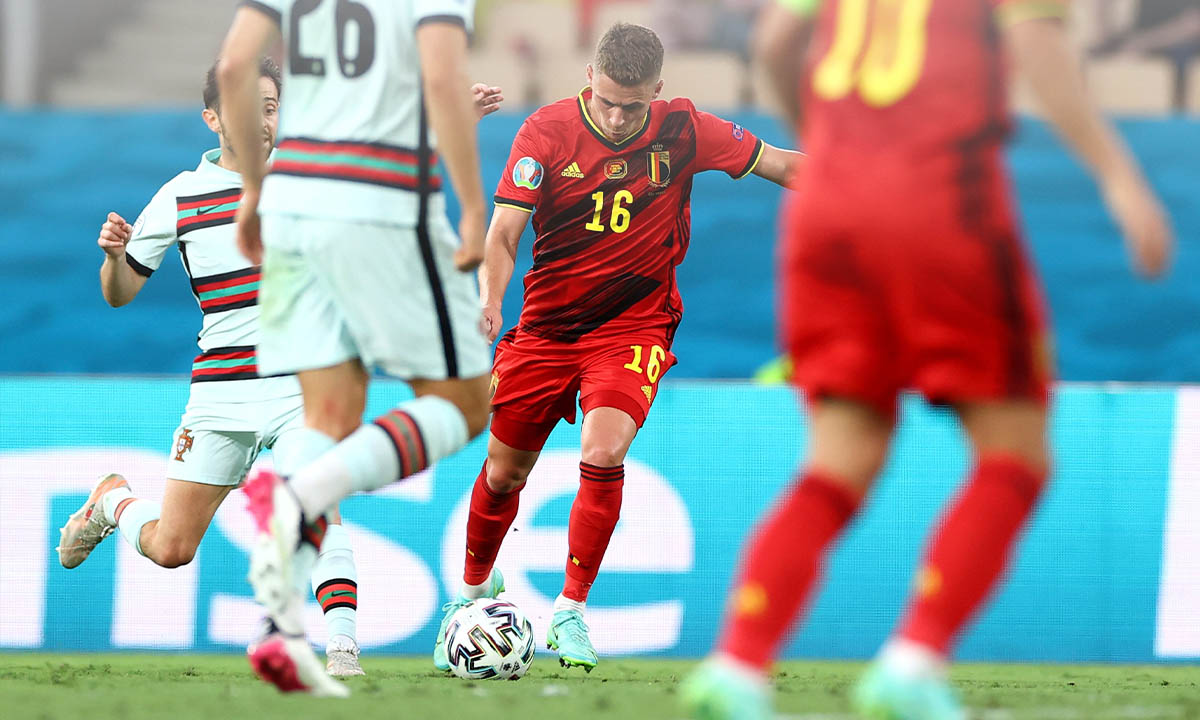 June 28, 2021, Seville: Two of Europe’s best teams came across each other for the first time at a major tournament. Roberto Martinez’s men outsmarted Fernando Santos’ side in the pre-quarter-finals of the EURO 2020. Belgium has knocked out the defending champion and thus sent a warning to the remaining participants.

Football Monk takes a look at the 5 talking points from a very highly staked game where Belgium came out on top against Portugal.

Proactive approach by both teams early in the first half:

Portugal had the first chance on the night in Diogo Jota. A good-looking cross from Sanches found Jota in the 6th minute, but his effort went wide. Just a few minutes later, the action shifted to the other half of the pitch. Meunier sent in a cross through the right flank into Portugal’s box for Lukaku. But, Ruben Dias was quick enough to clear the danger. However, the best chance of the game came in when Ronaldo brought Courtois into action. The Portuguese great’s freekick almost broke the deadlock here in Seville, but Courtois had his nation covered.

As many would expect, Belgium engineered the breakthrough here at the Estadio de La Cartuja. Belgium knocked at Portugal’s door quite a few times in the first half, but couldn’t break in until the 42nd minute. Thorgan Hazard picked up the second ball and scored a wonder goal with a strike straight from the heavens. Hence Hazard’s knuckleball goal meant Belgium went into the break with a one-goal cushion despite a very mediocre performance according to their high standards.

Portugal’s desperation to get back on track:

The thirst to get things back on track was very much visible from Fernando Santos’ men. Be it attacking substitutions, change in tactics and approach, they tried every area of the trade. But, nothing counted as Belgium blocked their passing lane every time. And when the ball reached the final third, Courtois did not let it get past him. A lot of tackles, fouls and heated moments became a normal scenario as the game progressed. The intensity reached its peak as the pressure kept on pilling on Portugal.

Everything went against Portugal and an addition to that would definitely be Thibaut Courtois’s first-class form. The Real-Madrid shot-stopper made things very complicated for Cristiano Ronaldo and co. Portugal came close on many occasions only to see Courtois outsmart their efforts every time. He made numerous contributions towards the business end of the match and thus sealed the deal for Belgium.

Belgium continues to fly high as they registered their fourth consecutive win at the ongoing Euros. The Belgian Red Devils have now set up a meeting with the Gli Azzuri which will be held in Munich come Friday. The big story here Seville will definitely be the exit of the defending champions. Portugal threw the kitchen sink at it, but in the end, it all ends in frustration. They generated an xG of 1.72 in comparison to Belgium’s 0.23. Hence, it itself shows how hard they tried.