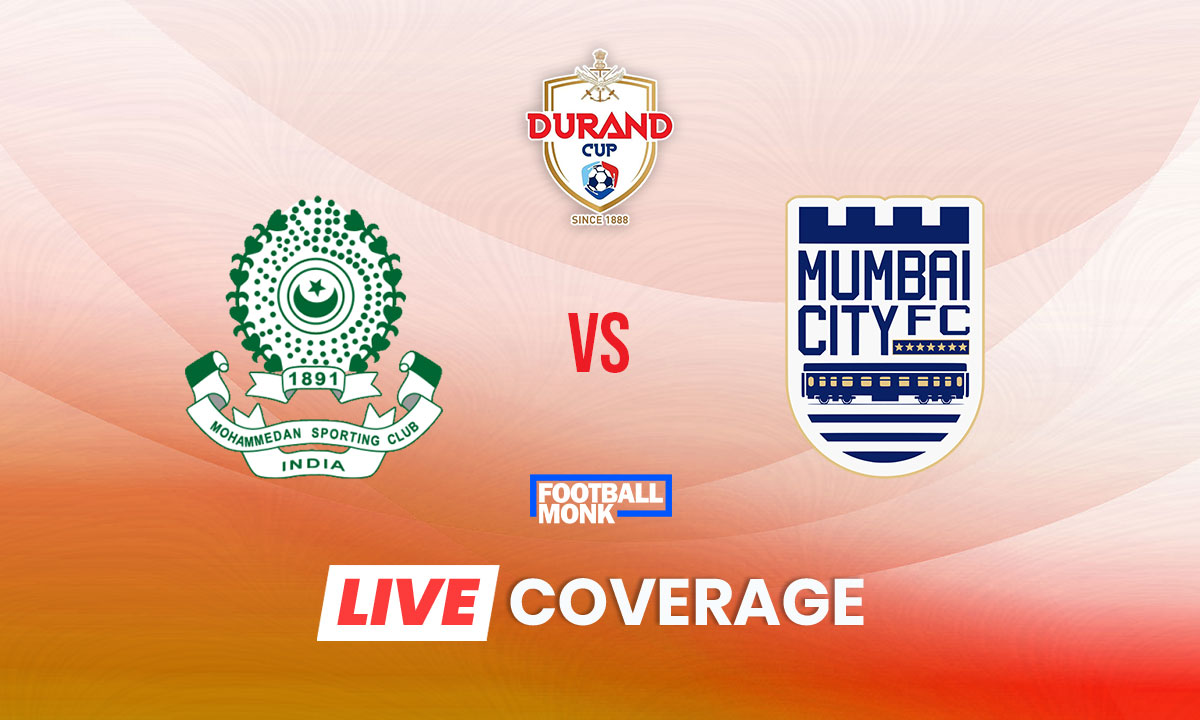 The first semifinal of the 131st edition of the Durand Cup sees local favourites Mohammedan SC taking on Mumbai City FC at the Salt Lake stadium. Follow this space for all live updates.

Full-time at YBK as the away team advanced through MDSC to reach the finals. Full-time score MDSC 0-1 MCFC That’s all for today!

73′ MCFC slowing down the tempo

A brilliant effort from Joseph to give MDSC the lead through a great freekick, Just wide MDSC 0-0 MCFC

53′ Banking on the quick counter

Action resumes for the second half MDSC 0-0 MCFC

The referee blows the whistle for halftime MDSC 0-0 MCFC

2 min extra time is being awarded

34′ Chhangte off colour so far

07′ Yet to gain the momentum

The teams line up in the following way:

On paper, the Islanders might have the slight edge going into the big game on Wednesday, given the sheer menacing nature of their attacking game and the quality and experience of the overall squad. But if the Islanders have scored 18 times in the tournament so far, the highest among all 20 teams, the Black & White brigade have been no slouch having scored a dozen times themselves. They have looked very well organized and settled under Russian coach Andrey Chernyshov, letting in just two in their campaign to the Islanders 10. MDSP also gave fellow semi-finalists Bengaluru FC a run for their money in a 1-1 draw and have played a pleasing brand of football.

Greg Stewart and Lallianzuala Chhangte have been the leading lights of the MCFC campaign scoring 13 times between them – the latter currently the tournament’s highest scorer with seven goals to his name. With the addition of experienced Senegalese defender Mourtada Fall and ace distributor Rowlin Borges, the Islanders now also look even more balanced and potent.

Little wonder then that Des Buckingham was a picture of calm and confidence in the pre-match presser when he said, “We will try to win within 90 minutes.” He was however respectful of his opponents adding, “Mohammedan are a good side. Look at the way they are playing. They will be playing on their home ground. I respect all the players of Mohammedan. Joseph is a good player, even Dauda. The way both the teams play I hope it’s going be an interesting game tomorrow. Looking forward to tomorrow’s game.”

Buckingham was referring to MDSP’s recent lethal addition to the side, Nigerian striker Abiola Dauda, who struck twice in his debut for the Black & Whites, in the quarter-finals against the Kerala Blasters. With the newfound assist powers of Trinidadian Marcus Joseph, the Mumbai defence will have a task on its hand and that is where Buckingham will believe that Fall can play a big role.

Coach Chernyshov was also aware of the enormity of the task at hand. He said at the pre-match presser, “Mumbai is a strong team. But we have prepared ourselves. If we can play in our own style and play good football then we can get good results. Tomorrow we are expecting a really difficult game. This is one step from the final, so an important game. Both teams have played nicely so they will want to win. Tomorrow’s match will be good for the supporters because they are going to witness a very good match.”

In football, there are quality players, good coaches, favourite teams and underdogs. There are pitch conditions and there is the home crowd and there are stakes. And all those factors converge on Wednesday at the VYBK. Expect a tight but mouthwatering game of football tonight!