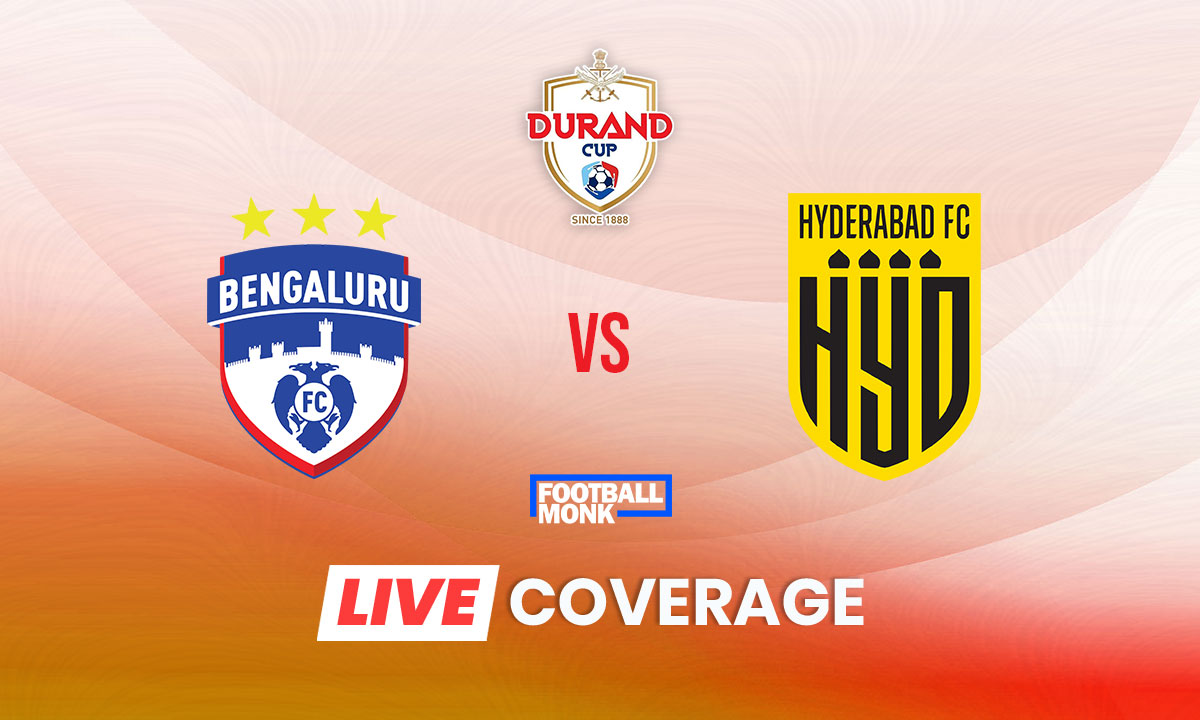 Bengaluru FC takes on defending ISL champions Hyderabad FC in the second semifinal of the 131st edition of the Durand Cup at the Salt Lake. The winner will meet Mumbai City FC in the highly anticipated final of the tournament on Sunday. Follow this space for all Live updates.

Referee blows the whistle for the final time this evening as Bengaluru FC books their place in the Final of the Durand Cup. BFC 1-0 HFC

Siviero’s freekick hits the target, Gurpreet fists the ball but goes out. Nim heads the resultant corner but the ball lands on the roof of the net. BFC 1-0 HFC

Leon handles the ball at the edge of the box and results in a freekick for Hyderabad. Is it the moment? BFC 1-0 HFC

Ogbeche gets the ball inside the goal but the referee pulls back the game for an earlier foul. 3 more minutes! BFC 1-0 HFC

Gurpreet collects the delicious cross with breaks the Hyderabadi attack. Could have proved costly had he not made the early decision. BFC 1-0 HFC

7 minutes added. 7 minutes for Hyderabad FC to do justice to their hard work. Meanwhile, Joao Victor gets booked. BFC 1-0 HFC

Parag gets ahead of Ogbeche and heads the ball away from the danger position. Ogbeche was lurking behind him. BFC 1-0 HFC

Final five minutes of the game as Shivashakti comes on for Sunil Chhetri. BFC 1-0 HFC

Joao Victor lashes onto the ball for a quick curler driven low down the ground from a tight space. Gurpreet saves again! BFC 1-0 HFC

Chhangte comes on for Halicharan. Final throw of the dice for Manolo Marquez. BFC 1-0 HFC

Halicharan’s cross meets Siviero who cushions the ball for Ogbeche. He connects but the ball goes just above the crossbar. Meanwhile, Leon Augustine comes on for Prabir Das. BFC 1-0 HFC

Siviero delivers a great cross to Borja who fails to keep control on the volley. Ball goes way beyond the target. BFC 1-0 HFC

Borja tries a long ranger but fails to keep it on target. Time running out for Hyderabad. BFC 1-0 HFC

Siviero comes in for Joel Chianese. Attacking change for the Nizams. BFC 1-0 HFC

First booking for someone related to Hyderabad FC and it’s not any player wearing yellow – it’s Manolo Marquez. BFC 1-0 HFC

Good little period of play from Hyderabad FC. However, nothing comes off it. BFC 1-0 HFC

Poojary tries to curl a ball in with his weaker foot but the ball goes well beyond. Time for substitutions. BFC 1-0 HFC

Quick throw-in from BFC catches the Nizams off guard as Roy Krishna backheels a brilliant ball onto the path of Sunil Chhetri. Onaindia clears for a corner. BFC 1-0 HFC

Sahil Tavora makes a blasting run down the flanks and laids the ball to Chianese who sends in a low hard cross. Jovanovic clears. BFC 1-0 HFC

Akash tries to hit the ball from the rebound in the corner but Gurpreet collects once again. BFC 1-0 HFC

Bart rises the highest and connects brilliantly with the ball with his head. Gurpreet stretches to save. BFC 1-0 HFC

Youngster Roshan gets into the books this time for time-wasting. Could be costly for BFC if they qualify for the final as he would miss the game due to the resultant suspension. BFC 1-0 HFC

Action resumes at the Salt Lake. Both teams made a change each. BFC 1-0 HFC

Chhetri connects brilliantly on the volley but the shot goes just over. Had the ball dipped a bit earlier, then the story could have been different. BFC 1-0 HFC

Bengaluru FC looks to be comfortable with the 1 goal lead and has gone into a defensive shell. Hyderabad, on the other hand, is going out of ideas. BFC 1-0 HFC

Rohit Kumar goes into the referee’s book for a tackle from behind. BFC 1-0 HFC

The Bengaluru goal gets labelled as an own-goal by Odei Onaindia. The replay shows the ball came off him the last. Anyways, the scoreline remains the same. BFC 1-0 HFC

Krishna got himself injured while scoring the goal, but he is back on his feet. BFC 1-0 HFC

Jayesh plays a through ball to Prabir Das whips a perfect ball in for Roy Krishna who nails the ball home. Old days? BFC 1-0 HFC

Poojary fails to keep the ball in but the ball falls in the path of Sunil Chhetri who was free with acres of space. The referee blows for the ball which went out earlier, saving Hyderabad FC. BFC 0-0 HFC

23′ Halfway through the first half

We reach the first quarter of the match and the teams are yet to open the goalscoring for the evening. BFC 0-0 HFC

Good piece of work by the Nizams who tries everything to break the BFC defence, but couldn’t really get inside. BFC 0-0 HFC

Parag gets the first yellow card of the evening, pretty early in the game. BFC 0-0 HFC

Parag delivers a long ball and Jayesh collects on the right wing. However, Prabir’s cross got blocked and now Hyderabad is on the attack. BFC 0-0 HFC

Roy Krishna delivers a shot from an acute angle but Anuj saves. The rebound goes away from Chhetri who was lurking. BFC 0-0 HFC

Halicharan laids on an inch-perfect ball for Ogbeche who pulls the trigger but Gurpreet stands tall for a brilliant save. BFC 0-0 HFC

Corner for Hyderabad. Jovanovic clears the ball following a half-move by Hyderabad after Sandesh cleared the initial ball in. BFC 0-0 HFC

Krishna flagged offside. He was coming back to receive the ball. BFC 0-0 HFC

We start the proceedings at the Salt Lake. Bengaluru FC attacks from the right to left while Hyderabad FC from left to right. BFC 0-0 HFC

The teams line up in the following way:

There is little to choose between the two teams on the evidence available in this IndianOil Durand Cup edition and that is what makes picking a winner a tricky proposition.

The ISL champs did look flawless till Army Red beat them in an inconsequential final group league match and then Rajasthan United FC also gave them a stiff challenge in the quarter-finals, before succumbing to their overall quality. BFC too have had stops and starts in their campaign and scraped through a 10-man Odisha FC in the quarter-finals, with a last-touch winner from Roy Krishna following a disastrous blunder by the Odisha FC keeper in the dying seconds.

Both teams have also scored an identical 11 goals in the five games so far with HFC conceding three, while BFC letting in five. What also gives HFC the slight edge is that they have had seven scorers so far with Bart Ogbeche leading the lines with five strikes. The Blues on the other hand have majorly relied on their striking trio of talismans Sunil Chhetri (3), Roy Krishna (3) and the pair’s understudy Siva Sakthi (4) for their goals. Faisal is the only other BFC player to have scored in the tournament and both Siva and Faisal have been preferred as substitutes thus far by coach Simon Grayson.

Manolo Marquez, the HFC coach was forthcoming in the pre-match press conference saying, “I think if we have to tell something about them then that is that they signed better players in attack this year. They also have very good players from their academy. I think they’re a very strong team physically. If you remember both games of last season we were very similar. We played better than them in the first half with our style and they played better than us in the second half with their style. We have to try to play with our style. For example, the other day it was very equal between Odisha & Bengaluru but these dangerous offensive players decided the score finally.”

Bengaluru coach Simon Grayson also spoke about the familiarity between the two sides saying, “It’s going to be a tough game. We have to defend well and we have to score. HFC is a good side. But we are ready. I think most of our players know the weakness and strong points of HFC. So we know what we have to do and we respect the opposition. Tomorrow we want to score more goals than HFC. Play balanced football and try to win the game.”

Many are billing the game as a shootout between BFC’s strike trio and HFC’s Bart Ogbeche but it is really a clash of two fighting and quality units with players like Akash Mishra and Suresh Wangjam and others on both sides capable of turning a big game. It promises to be an exciting game of football with the big Durand final prize up for grabs.