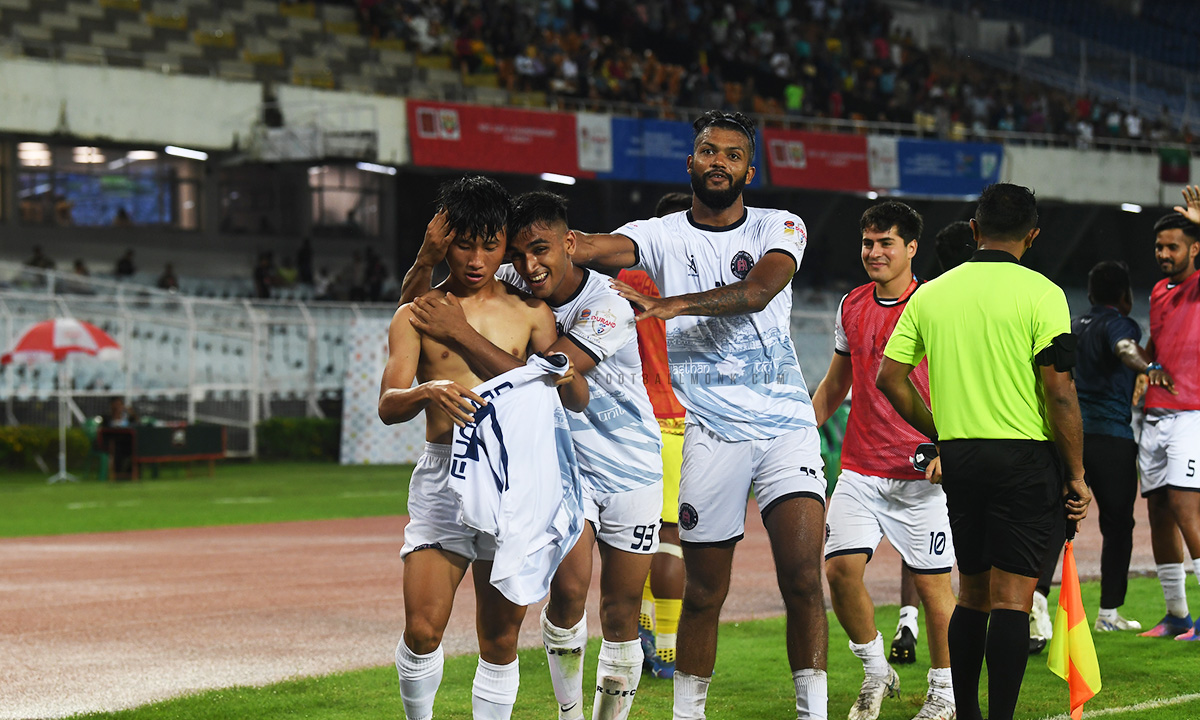 Rajasthan United FC produced the biggest upset of the 131st IndianOil Durand Cup so far, beating local favourites ATK Mohun Bagan 3-2 in a Group B fixture at the Vivekananda Yuba Bharati Krirangan. It was a grand debut for RUFC in the tournament, as Gyanman Niukm got the all-important winner in the fifth minute of stoppage time to silence the home crowd. Earlier, Kiyan Nasiri had given ATKMB the lead two minutes before the end of the first half, only to see Kyrgyz Bektur Amangeldiev equalise just before Crystal John blew for half-time. Ashique Kuruniyan then put ATKMB ahead immediately after the resumption but Lalremsanga Fanai tied it all up again in the 61st minute. Just when everyone thought that the game was headed towards a stalemate, Arunachal’s first ever player to play top-flight football in India, Nikum slotted one past ATKMB keeper Arsh Shaikh to create history.

ATKMB started as home favourites do, piling on attack after attack but the organised RUFC defence ably led by Man of the Match Niraj Kumar in goal thwarted all.

In the 20th minute, Niraj brought off a stunning double save, first from a strike by Norwegian international Johhny Kauko and then when Kiyan went for a goal off the rebound.

Just over the half-hour mark Liston Colaco measured a free-kick which was goal bound, only to find Niraj brilliantly up to the task again.

The goal came when Hugo Boumous began a counter-attack and found Ashique on the left wing, who delivered a cross for Kiyan to score.

ATKMB’s joy was short-lived however as RUFC struck just before the half-time whistle when Neihsial made a run outwitting the ATKMB defence and crossed for Amangeldiev to score.

ATKMB were in experiment mode in the match clearly as coach Juan Ferrando took off Liston in the first half and then also took off Boumous later in the second to bring in defender Ashish Rai. However, they were clearly stung by the equaliser as they came out after the lemon break to take the lead again.

Boumous took a clever quick free-kick to find Ashique unmarked inside the box, who drove in to place it inside the net perfectly to score his first goal in his very first competitive game for ATKMB.

Then came the double change which changed the match. Ferrando took out Boumous and Florentine Pogba to bring in defenders Ashish Rai and Subhasish Bose.

RUFC took advantage and forayed forward with Lalremsanga Fanai taking advantage of a melee inside the box and a rebound off an Arsh save, to slot home.

ATKMB stepped up their attack once again and on another day, the result could have been different. Kiyan saw one come off the crossbar and Manvir missed with just the keeper to beat when his shot sailed over in the 75th minute.

With RUFC crowding their defence and ATKMB on the attack, there seemed only two results possible as the game entered five minutes of stoppage time.

In the very last minute, RUFC launched a counter from their half and found the ATKMB defence backtracking. A cross from the left found Nikum right in front of Arsh and he made no mistake to give RUFC a famous victory.

Next matches of ATKMB and RUFC

ATKMB come back on August 24 to match up against Mumbai City FC at the VYBK while RUFC play Emami East Bengal at the Kishore Bharati Krirangan on August 26, 2022.