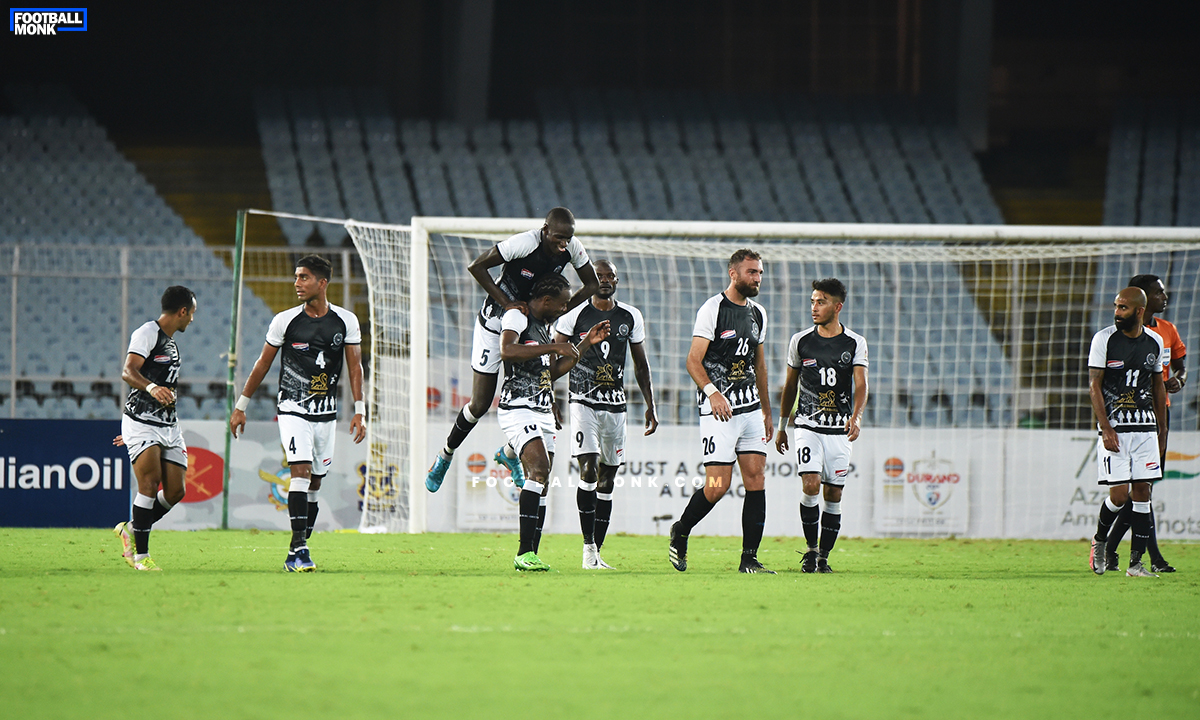 Kolkata giants Mohammedan Sporting (MDSP) overwhelmed a young and talented Kerala Blasters (KBFC) 3-0, in the first quarter-final of the 131st IndianOil Durand Cup, played here at the Vivekananda Yuba Bharati Krirangan (VYBK), to become the first team to make the semis of Asia’s oldest football tournament. A brace from debutant Nigerian Abiola Dauda and a first-half strike by Sk. Faiaz ensured a smooth ride to the last four for the Black and White brigade.

MDSP, despite missing out on key players like Faslu and Abhishek Halder due to injuries and suspension, were on the front foot from the outset and it seemed like a matter of time before they scored. Marcus Joseph himself missed a couple of headers before setting up the opener.

Credit should go to Azharuddin Malik for holding onto the ball in the middle of the Blasters half and then playing back to Safiul who played forward to Abhash Thapa. He found Marcus to his left and the Trinidadian delivered a dangerous low cross across the face of goal. Among two onrushing MDSP attackers, Yumnam Gopi missed it but Faiaz was at hand to slot home with ease.

The Blasters did not let the goal subdue their spirits however and continued to try and get into the game creating a few good chances of their own. The equalizer did not quite come their way.

After Gourav Kankonkar did well to create space outside the box and let one fly over the MDSP bar, Marcus created an exact similar goal-scoring opportunity as in the first, but this time Faiaz was late in reacting to the situation.

Kerala was soon on the counter with midfield general Vibin Mohanan finding Md. Aimen inside the box on the left. The striker dodged one defender to create space on his right and unleashed a shot on the turn, but it was too weak to trouble Zothanmawia.

Andrey Chernyshov was clear with his intentions when he brought on Kean Lewis and Abiola Dauda in place of Gopi and Tajik Nuriddin Dabronov at half-time. The new recruit Nigerian striker was on his debut for MDSP.

The attacks kept coming and Dauda got his first big chance in the 58th minute when Marcus played Faiaz inside the box on the right and he, in turn, found the Nigerian perfectly with his cross. Dauda met the ball on the full and with the keeper and an open goal in front of him, he missed his connection and the volley flew over.

He did not have to wait for long for his debut goal, however, when the same Marcus-Faiaz combination, this time played him inside the box in between two defenders, just a minute later. The Nigerian bluffed the keeper, taking him out of the equation and shot towards goal. Centre-back Marwan backing up tried to salvage the situation, but all he got was a touch before the ball trickled inside the goal. The insurance was delivered.

The Blasters kept their chins up and kept trying to find an opening. Roshan Gigi was set up for a good chance in the 74th, but Zothanmawia was again up to the task.

It was then all over in the 84th when Marcus released Abhishek Ambekar on the left wing. The left wing-back drove in towards the touchline and delivered a perfect cross for Dauda to head in.

Wayne Vaz in fact missed a sitter from close in the final seconds of the game but that match was long over.