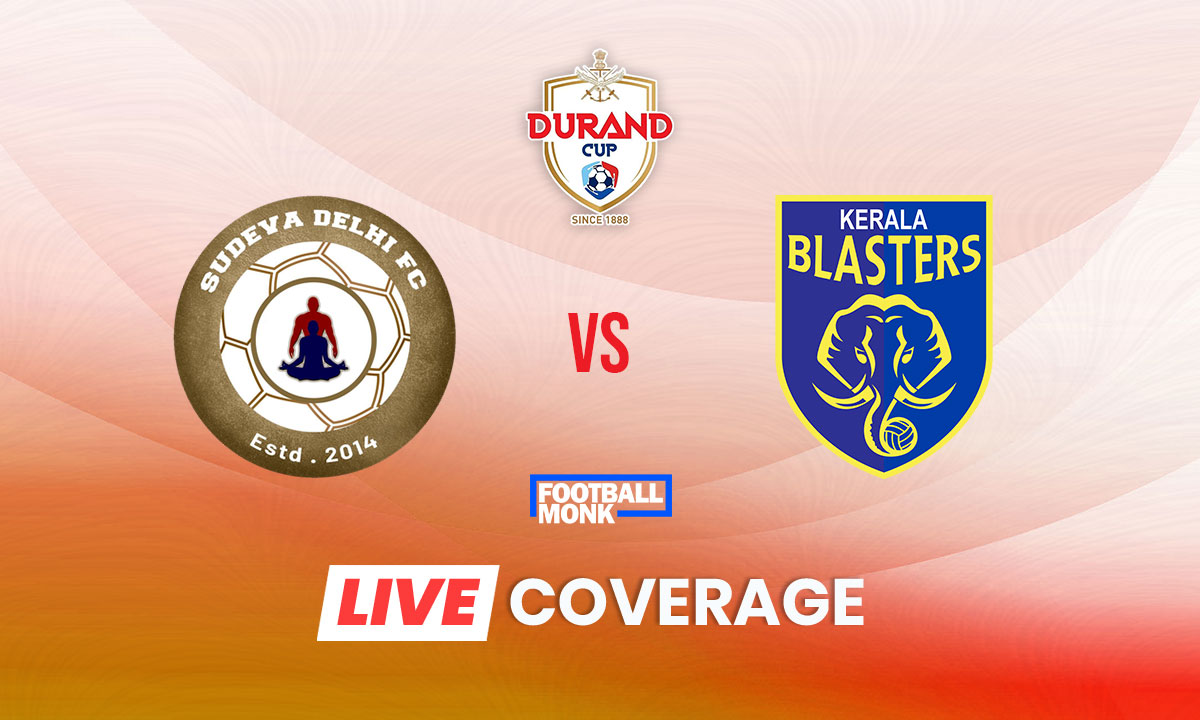 A young Kerala Blasters faces Sudeva Delhi FC as both the teams look forward to a positive start to their 131st Durand Cup campaign at the Indira Gandhi Athletic stadium today. Follow this space for all live updates.

Fulltime at Guwahati as both teams play out an entertaining draw. Sudeva looked better organised but Kerala had their fair share of chances as well. SDFC 1-1 KBFC

Tejas Krishna finds the freekick with his head and directs it goalwards but unfortunately, the ball grazes past the upright. SDFC 1-1 KBFC

Kuki’s freekick was on target but didn’t cause any trouble to the keeper. Meanwhile, 4 minutes added. SDFC 1-1 KBFC

Into the final minute and Sudeva wins a freekick in a dangerous position. SDFC 1-1 KBFC

Basit gets a booking for a professional foul, stopping a Kerala Blasters counter. One for the team? SDFC 1-1 KBFC

Sudeva piled up a string of attacks but ultimately the ball goes away. SDFC 1-1 KBFC

The game rolls into the final cooling break for the evening. SDFC 1-1 KBFC

Substitute Jasim gets booked for a foul on Akbar. SDFC 1-1 KBFC

Nischal cushions a header into the box off a long ball but the assistant referee raises his flag. SDFC 1-1 KBFC

We reach the hour mark at Guwahati as Kerala Blasters make the first change of the evening. Jasim comes in for Ajsal who has been very impressive. SDFC 1-1 KBFC

Gaurav tries a long-range effort but his shot was well blocked by the Sudeva defence. SDFC 1-1 KBFC

Blasters lose the opportunity to benefit from a quick throw-in. SDFC 1-1 KBFC

Half-time in Guwahati. Both teams are equally matched and an exciting second half awaits! SDFC 1-1 KBFC

Mangku Kuki with a worldie!!! The curl and the finesse off his left foot will surely be played over and over again. SDFC 1-1 KBFC

Tejas Krishna booked for a two-footed challenge on Karthik, who stays down injured. Krishna, however, won the ball but the follow-through was pretty dangerous. SDFC 0-0 KBFC

Good spell of play from Sudeva FC, but they are just lacking the finishing touches. SDFC 0-0 KBFC

Sleek feet from Aritra Das of Kerala Blasters who tries to put in a good cross. But the Sudeva defence crowds the space. SDFC 0-0 KBFC

Much needed after a great start. Kerala looks like will be the first team to score whereas Sudeva is waiting for the perfect opportunity. SDFC 0-0 KBFC

Basit Ahmed Bhat tries to hit the ball on the volley but the ball goes wayward. Not sure whether he intended a cross or a shot.

Ajsal steals the ball brilliantly and plays a low-driven cross inside the box but a last-ditch sliding tackle by Ashray Bhardwaj saves the day for Sudeva. SDFC 0-0 KBFC

Yet another Counter attack in vein by Kerala Blasters, as Sudeva defender slides in to clear the ball. SDFC 0-0 KBFC

Kerala Blasters break into a quick counterattack led by Ajsal, but the Sudeva defender clears the ball. The Resultant corner goes over everyone. SDFC 0-0 KBFC

Sudeva’s formation looks strong and compact, forcing Kerala to take the risks while moving forward. We have a tasty encounter in our hands. SDFC 0-0 KBFC

Blasters Goalkeeper Sachin forced to make a low save from a shot from Karthik. Big chance missed for Sudeva. SDFC 0-0 KBFC

The Kerala Blasters and Sudeva FC game at the Indira Gandhi Athletic stadium which follows the FC Goa-Indian Air Force game on Matchday 4, will see both teams making a first appearance in this year’s tournament while it will be their second overall appearance at the IndianOil Durand Cup.

With Kerala bringing a young side and Sudeva having an active transfer season it will be interesting to note how things pan out on the ground but both have players in their squad who the opponents will be wary of.

The Blasters might unleash Sudeva’s own Shubho Paul on them in attack and with players like India U-20 SAFF championship winner Vibin Mohanan and talented midfielders like Ebindas Yesudasan in their ranks, Sudeva will have their hands full.

The Delhi side on the other hand does not lack talent as well with the likes of Abhijit Sarkar, who impressed one and all in the FIFA U-17 world cup held in India and later, in their squad. They also bring in experience in midfield with the likes of Souvik Das who has played in the highest echelons of Indian football and with the top clubs as well, as they do in wing play with the likes of journeyman Chesterpaul Lyngdoh.

Odhisa FC began proceedings in Group D with a 6-0 win over North East United FC (NEUFC) and there are only two spots for grabs to make the knockouts. None of Sudeva or the Blasters will want to let go of an opportunity to win first-up by cashing in on any laziness on the other’s part.

The match will be telecasted on the Sports18-1, Sports18-1HD, Voot, Khel and JioTV.