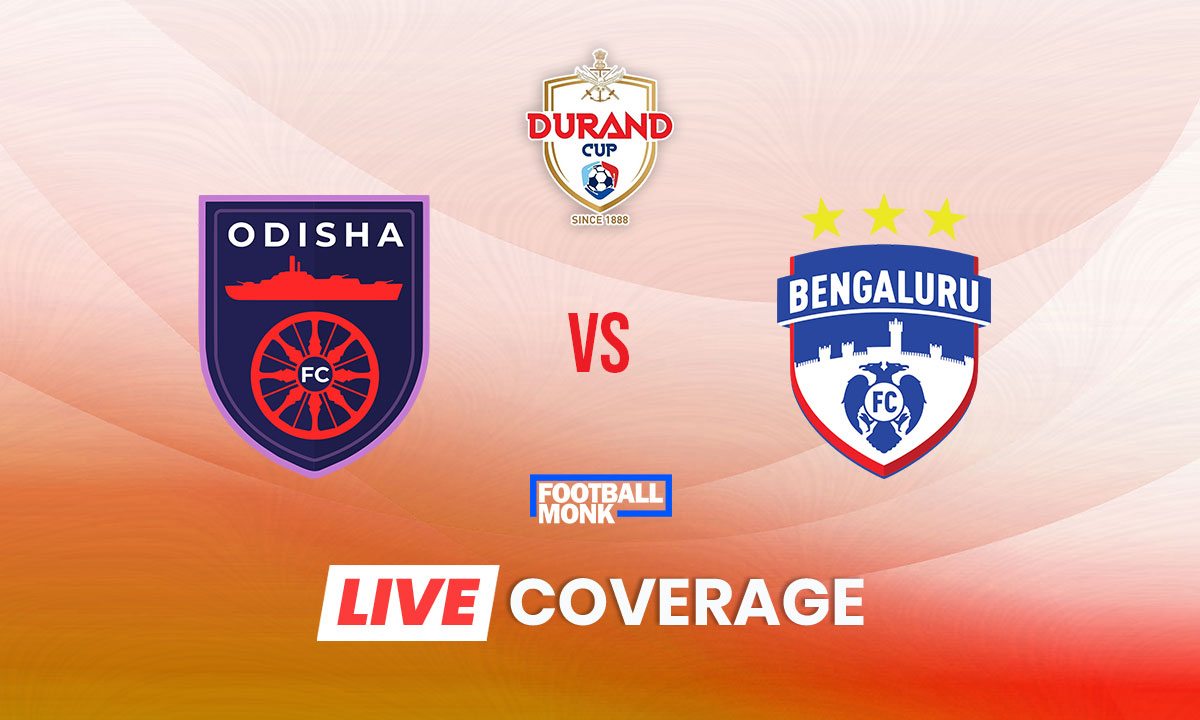 Odisha FC faces Bengaluru FC in the second quarterfinal of the 131st edition of the IndianOil Durand Cup at the Kishore Bharati Krirangan in Kolkata. Follow this space for all live updates.

The final whistle for the game and the last min goal by Roy Krishna secured the dramatic win for BFC OFC 1-2 BFC That’s all for today!

A brilliant goal for Diego to level the game. Game on at KBK OFC 1-1 BFC

107′ OFC pushing for the equalizer

OFC trying to get into the game OFC 0-1 BFC

Second half of Extra Time

105′ End of the first half extra time

End of the first half of extra time in KBK. BFC got the important advantage OFC 0-1 BFC

100′ BFC Trying to secure the game

93′ BFC pilling on the pressure

Full Time at KBK as two teams failed to break the deadlock. Extra time ahead with a potential penalty shootout OFC 0-0 BFC

92′ Corner in a crucial stage

73′ OFC trying to hit on the counter

60′ Some drama on the field

Action resumes for the second half OFC 0-0 BFC

The referee blows the whistle for halftime OFC 0-0 BFC

2 min extra time is being awarded

Javi booked for simulation on the box OFC 0-0 BFC

Heavy challenge on Roy Krishna. No foul given OFC 0-0 BFC

The Starting Lineups of the respective teams are as follows:

Both Bengaluru FC (BFC) and Odisha FC (OFC), chief protagonists of the second 131st IndianOil Durand Cup quarter-final scheduled on Saturday, September 10, 2022, at the Kishore Bharati Krirangan (KBK) here in the southern part of the city, are anticipating an intense clash. That was the gist of what both coaches Simon Grayson of BFC and Josep Gombau of OFC, said at the pre-match media conference. The match kicks off at 6 pm IST.

Both teams have taken contrasting routes to reach the knockouts. While BFC played all their games in Kolkata and won three out of four to qualify as Group A second place holders, OFC won all their four games to qualify as Group D toppers from the Guwahati leg of the tournament. The Blues will surely be more comfortable at the KBK having played two games there already, but the Juggernauts have oozed quality on the field and will be confident going in with an all-win record.

Simon Grayson sounded happy overall with the progress made so far saying, “It’s going to be a good game. In the group stages, we have got good game time. And now we have to do well to win this Durand Cup. It has been really helpful to us as a pre-season tournament. The tournament has a rich history. So it will help us to do good in the upcoming league.”

Odisha gaffer Josep Gombau was also alert to the job at hand saying, “It’s a big game for us. BFC is a good team. But we are ready. We are hungry. We want to win and show our talent. Because ISL is coming and we have to do good. Durand Cup was a very nice tournament. It gave us a lot of games to prepare ourselves. But we are ready for tomorrow’s game. We are ready to win.”

Both teams will depend heavily on their forwards but more so BFC as seven of their eight group stage goals have come from their strikers Sunil Chhetri, Roy Krishna and Siva Sakthi. Odisha on the other hand has had as many as eight scorers in the dozen goals that they have blasted past their group stage opponents, including six against NorthEast United in their very first game.

The Blues defence has also let in four while the Juggernauts are yet to concede a goal in the tournament and in the end equations, that might just turn out to be the deciding factor.