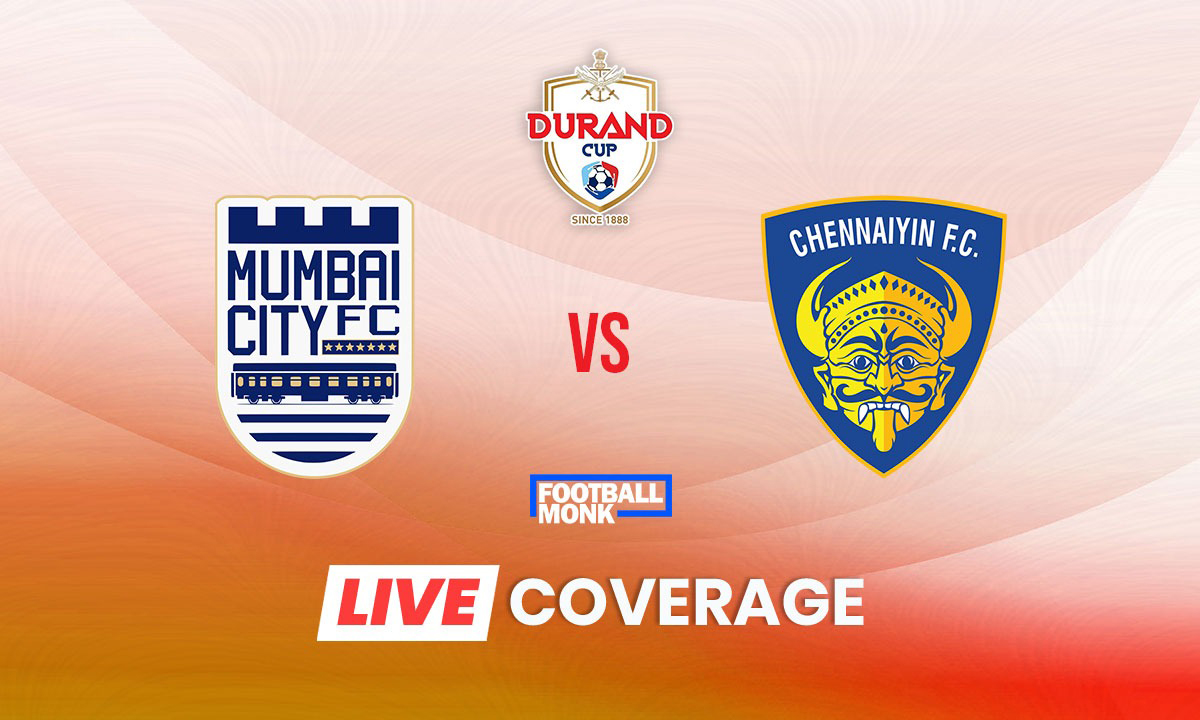 Mumbai City FC takes on Chennaiyin in a mouth-watering clash in the 3rd quarter-final of the Durand Cup. Follow this space for all live updates.

Mumbai City FC qualifies for the Semifinal with a hard-fought win over Chennaiyin. MCFC 5-3 CFC

Chhangte dribbles past Chennaiyin defence and laids the ball on to Greg Stewart who does what he does the best. No way Chennaiyin is coming back now. MCFC 5-3 CFC

Gurkeerat tried to chip Debjit but fails horribly. He could have easily rolled the ball to his teammates who were free. Will it cost them? MCFC 4-3 CFC

Vafa flagged offside when the ball lands on to him from a Thapa freekick. Correct decision. MCFC 4-3 CFC

Rahim Ali pulls one back for Chennaiyin. The striker pounces on the ball after the Marina Machans win a corner off a long ranger which deflected off a Mumbai player and hit the crossbar. Game ON! MCFC 4-3 CFC

Mumbai clear ahead of Chennaiyin thanks to Chhangte’s brilliance. 15 more minutes to go. MCFC 4-2 CFC

Griffiths with a crucial clearance. Out for corner. MCFC 4-2 CFC

Sorry for the delay we received some technical errors from our point, however, we are back. MCFC 4-2 CFC

Shout for a penalty by Sliskovic as he gets past Lachenpa, but denied MCFC 1-1 CFC

Action resumes for the second half MCFC 1-0 CFC

The referee blows the whistle for halftime MCFC 1-0 CFC

1 min extra time is being awarded

MCFC with early control of the game MCFC 0-0 CFC

The Starting Lineups of the respective teams are as follows:

There is nothing to choose between Mumbai City FC (MCFC) and Chennaiyin FC (CFC) as they clash in the third quarter-final of the 131st IndianOil Durand Cup, here at the Vivekananda Yuba Bharati Krirangan (VYBK) on Sunday. The match kicks off at 6.00 pm Indian Standard Time (IST).

The Islanders have come through as group toppers of Group B but only just, while the Marina Machans qualified by finishing a clear second to reigning Indian Super League (ISL) champions Hyderabad FC in Group C. MCFC though will have the advantage of having played their group games at the Kolkata venues while CFC played in Imphal.

That slight conditions advantage may not hold for much at this professional level however and given the quality both sides possess, it will be tough to pick a winner.

“No fitness issues in the team,” said a confident former German international and CFC coach Thomas Brdaric, in the pre-match press conference. “Whether it’s Champions League or Durand, our approach won’t change,” said an equally calm Des Buckingham of MCFC.

Chennaiyin has been banking heavily on their ace midfielder Anirudh Thapa to deliver the goods and he has so far with as many as five-goal contributions. Mumbai on the other hand has the tournament’s highest scorer Lallianzuala Chhangte in their ranks with five goals to his name. Their efforts have helped both sides to overcome a few problems at the back where they have conceded six (CFC) and seven (MCFC) goals respectively.

A lot will also depend on the foreign players of both sides and the impact they have on the game. The likes of Ahmed Jahouh and Gary Stewart for the Islanders and Vafa and Petar Sliskovic for the Machans have shown the potential to turn games consistently. Des Buckingham also spoke about Murtada Fall having joined the side and the Senegalese defender has been one of the most successful players in Indian football in recent times.

Overall, it has all the makings of a blockbuster game of football.