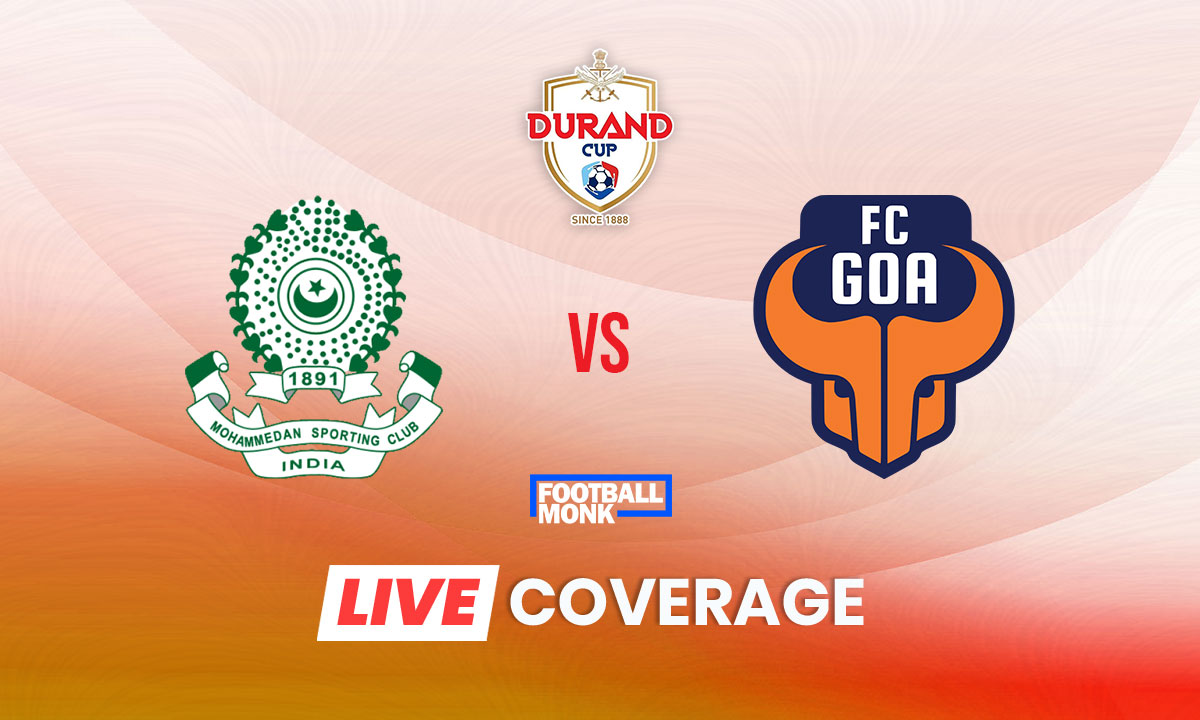 Mohammedan SC faces FC Goa in the opening encounter of the 131st Durand Cup at the Salt Lake stadium today. Follow this space for all live updates.

Full time at Salt Lake as home team Mohammedan Sporting flew past Goa with a convincing victory MDSC 3-1 FCG That’s all for today!

Finally, the comeback is complete for MDSC as Faslu scored the crucial goal to give the home team lead MDSC 2-1 FCG

The final 10 mins of the game. The score remains same MDSC 1-1 FCG

77′ Substitution for both teams

MDSC trying to convert on the pressure MDSC 1-1 FCG

68′ Substitution for both teams

Shot off target by Nemil for GOA MDSC 1-1 FCG

Good save by GK to prevent Faiaz from giving MDSC the lead. The score remains level at Saltlake Stadium MDSC 1-1 FCG

Action resumes for the second half MDSC 0-1 FCG

3 min extra time is being awarded

A good run by Faiaz but intercepted, in the end, MDSC 0-0 FCG

The Goa side is brimming with young talent and Mohammedan Sporting is at full throttle as the first official game of India’s newest footballing season gets underway amidst a build-up that saw a Trophy tour of five cities including Guwahati and Imphal, the two first-time host cities.

The home team gaffer Andrey Chernyshov of Russia reiterated the importance of a win to open the season and also alluded to last year’s loss saying, “We all remember that we lost to FC Goa in the last final. Of course, this will give us additional motivation in this match. But we also understand that this is the opening match of the tournament and is an additional excitement. We have a lot of new players that we want to see in serious games. Therefore, it is very important for us to start the tournament with a win.”

The Gaurs are being managed by Deggie Cardozo in this Durand edition and are also brimming with confidence with a well-trained and young side eager to grasp the opportunity of performing on the big stage.

They will be led on the field by the likes of Muhammed Nemil who first caught the eye a-la Sunil Chetri, in the previous edition of the Durand with a wonder goal. Phrangki Buam and Ayush Chetri also lend a lot of solidity to the line-up.

Coach Cardozo was as enthused as his team when he said, “We’re excited to kickstart our Durand Cup campaign on Tuesday. As we face Mohammedan SC, it will be a repeat of last year’s final. They may have done their homework but so have we, and our focus is completely on ourselves and what we can do to get a good result.”

He added, “Starting the tournament on a positive note, with a good result is important and that is what we hope to do on Tuesday. That the match will be held in front of fans gives us some extra motivation.”

The Black & White brigade on the other hand has retained the nucleus of last year’s squad with Trinidadian marksman Marcus Joseph still leading the lines. Players like Milan Singh in midfield and Abhishek Ambekar bring in the experience with the likes of former Lokomotiv Moscow and Tajik national-team recruit Nuriddin Davronov bringing in the likely x-factor.

All in all, it promises to be a competitive game of football on a heavy outfield at best, with rains lashing the City of Joy in the days building up to the game. He who slips best will slip in with a victory.

The match will be telecasted on the Sports18-1, Sports18-1HD, Voot, Khel and JioTV.