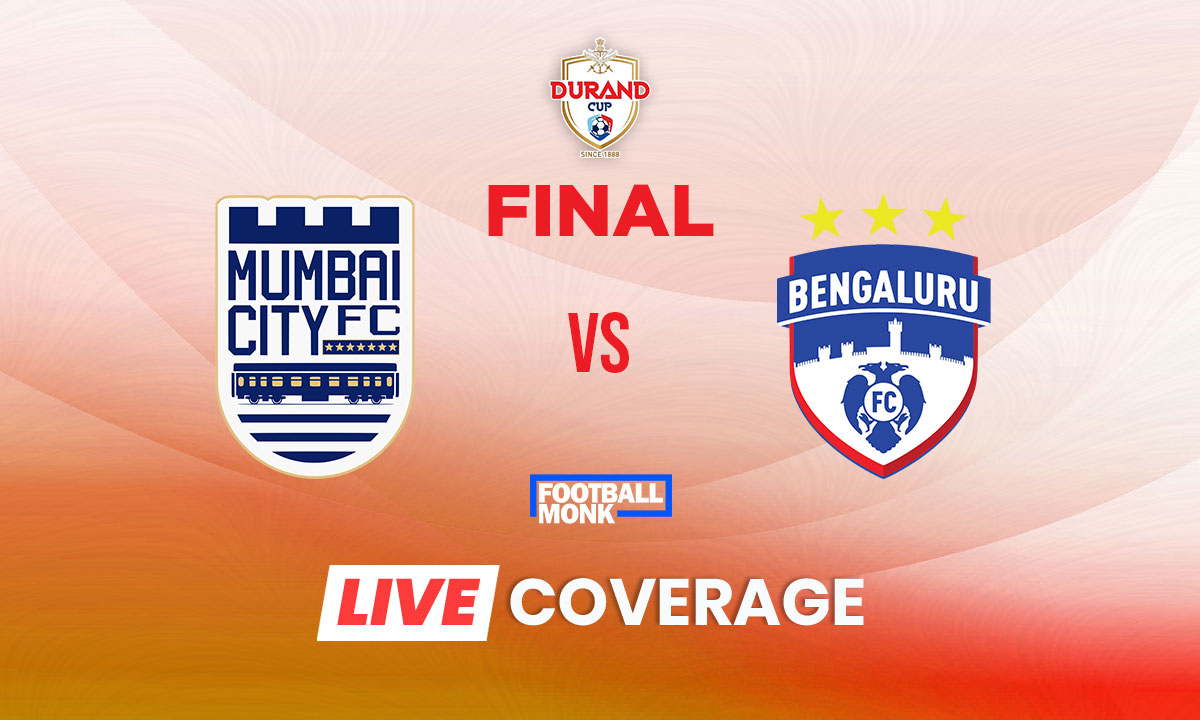 Mumbai City FC faces Bengaluru FC in the much anticipated final of the 131st edition of the Indian Oil Durand Cup at the Salt Lake Stadium, today at 6:00 PM. Follow this space for all Live updates!

Referee blows the whistle for the final time this evening. BFC is the champion for the 131st  Durand Cup. Despite the pressure it was simply not enough for MCFC. It’s full time at YBK MCFC 1-2 BFC

6 minutes added time, 6 mins for BFC to get their hands on first trophy of the season, 6 min for MCFC to slavage this game towards extra time MCFC 1-2 BFC

BFC trying to slow down the tempo MCFC 1-2 BFC

Yellow for Jhingan for foul on Stewart MCFC 1-1 BFC

Foul on Roy Krishna, a free kick in the dangerous area for BFC MCFC 1-1 BFC

Foul on Roy Krishna, a free kick in the dangerous area for BFC MCFC 1-1 BFC

Here comes the equalizing goal from MCFC from a rebound, scored by Lalengmawia MCFC 1-1 BFC

Shot off target from Jahouh

The Islanders, winners of the Indian Super League (ISL) and League Winners Shield in the 2020-21 season, have looked solid in the run-up to the finals, what with the addition of key players from the quarter-final stage, like Senegalese defender Mourtada Fall, giving them a more rounded look. They have the highest scorer of the tournament with seven goals in Lallianzuala Chhangte in their ranks and someone of the quality of Greg Stewart marshalling the midfield with authority.

Des Buckingham, coach of Mumbai City, said at the pre-match press conference, “We are here to win the Durand Cup and start the ISL season with more confidence. I am happy with my team till now. I am expecting an exciting match. BFC is a good team they have good players. My message to the team for tomorrow will be to enjoy the game.”

Simon Grayson, BFC’s English coach was also respectful of his Sunday opponents and said at the pre-match presser, “Look I think we have to play as a team tomorrow. Mumbai has some very good players. Greg Stewart and others. So, we know what they can do. They play a lot of passes. We have to be good tomorrow to stop the opposition. I think it’s important to win the final and it doesn’t matter what style we play. We have to be careful tomorrow and make sure we play better. We don’t have any injuries. Our target will be to win the trophy without any injuries. We are in the final and we will make sure that we win the trophy because we have the mentality to win.”

BFC were the ISL 2018-19 champions, but also have six other top domestic titles to their name and will be vying for their seventh. They have presented the most successful striking force of the tournament with talisman Sunil Chhetri, Roy Krishna and Siva Sakthi, all being in goal-scoring form. At the back too, the experience of regular Indian internationals like Sandesh Jhingan and Gurpreet Sandhu has held them in good stead.

Both teams like to win and it has been some time since they have not won silverware. We can therefore expect a mouthwatering game of football come Sunday at the hallowed VYBK.