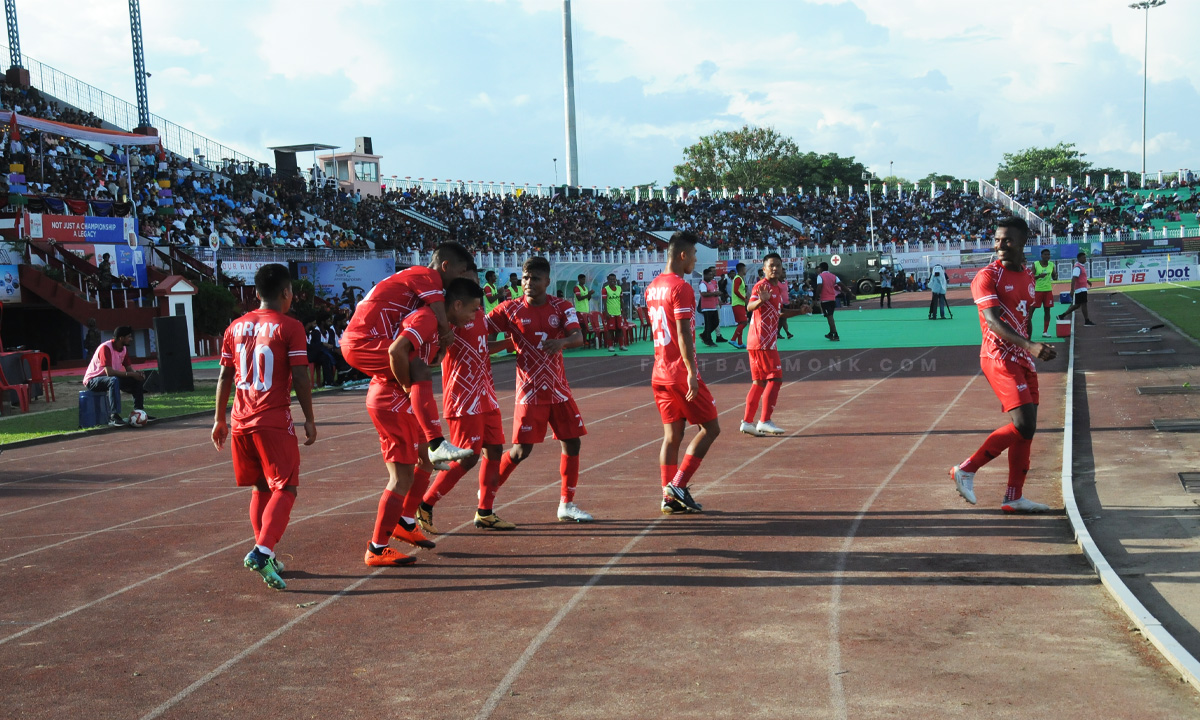 Army Red sprung the first surprise of the 131st IndianOil Durand Cup, holding two-time Indian Super League (ISL) winners Chennayin FC to an exciting 2-2 draw, in a Group C encounter at the Khuman Lampak stadium. The game turned on his head in the second half after a barren first 45 minutes. The Reds took the lead through Lethaolen Khongsai which was neutralised by Julius Duker, a minute before regulation time. Then Edwin Vanspaul struck in the fourth minute of added time to put Chennayin ahead, only for Liton Shil to equalise yet again, in what turned out to be a crazy final seven minutes. All four goals came off corners.

The first 45 minutes turned out to be a battle for midfield supremacy with both teams forcing each other to play out on the wings. Jockson got a loose ball in the 30th minute on the edge of the box and unleashed a piledriver which went inches wide. It was a first clear chance and miss by Chennayin.

Then skipped Anirudh Thapa in the 36th, delivered a trademark curling corner which missed everyone and found Fallou, who tried to find the net from a tight angle but missed. Three minutes later, Chennayin had the third miss when Jiteshwor Singh found Petar Sliskovic with a defence penetrating pass. The Croatian was in a great position to pass the ball in but muffed up his connection to see the ball sail miles above the bar.

The Reds keeper Bhabindra then brought off a great save in the 42nd minute, snatching the ball from the foot of Thapa after charging out bravely after the skipper had controlled a long ball from defence well.

The second half brought the goals. The Army Reds turned up the heat as well and Chennayin also kept attacking in what was end-to-end free-flowing football. The Reds however got the goal first. An inch-perfect corner in the 54th found Khongsai, who slotted home with a thumping header.

Stung by the reverse, Chennaiyin came out all guns blazing and Vanspaul hit the woodwork in the 62nd minute. Silskovic then got an open chance from a measured aerial ball, but he jumped high to head the ball straight into the keeper’s gloves.

Chennayin finally got their goal in the 89th minute. Another perfectly executed corner from Thapa found Duker who made no mistake this time with a towering header. They were not done yet, however.

Another corner from Thapa in the fourth minute of stoppage time was cleared out by the Reds defence only towards a lurking Vanspaul whose punch found the back of the net and put Chennayin in the lead.

If anyone thought the game was over, they were in for a surprise as two minutes later, Sushil floated in a corner and the ball flew over Debjit to find Liton, who tapped in like a fox in the box.

and the stalemate remained for the first draw of the tournament after six games.

Next matches of Army Red and Chennayin

Army Red play their next game against local favourites Neroca FC on August 24, 2022, while Chennayin plays Hyderabad FC on August 26, 2022.