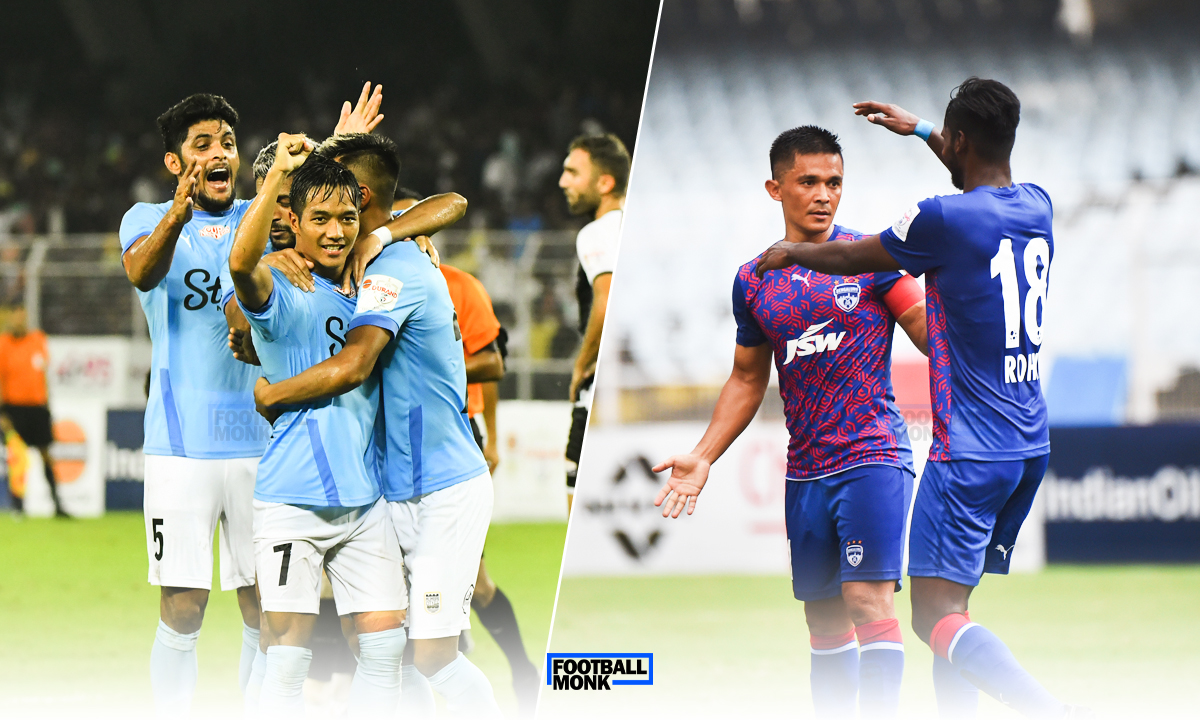 The 131st edition of the Durand Cup is finally reaching its ultimate conclusion. Bengaluru and Mumbai City FC will go toe to toe for the final at Saltlake. The final of the oldest football competition in Asia will take place on September 18. The journey between Bengaluru FC and Mumbai was definitely not easy. Both teams struggled and on many occasions were on the verge of elimination. With great determination and effort, they will finally play for the first trophy of the season. 20 teams were part of this competition edition. Now, we look back at the journey of the finalists.

BFC was set on the group with Kolkata giants Mohammedan along with Jamshedpur, FC Goa and Indian Air Force FT. Simon Grayson’s boys finished the group second with 8 points. Bengaluru defeated Jamshedpur 2-1 on their very first encounter giving them the good start they were looking for. Captain and talisman Sunil Chhetri opened the scoring for the Blues early in the first half, with Roy Krishna doubling the lead on a Sunil assist, in the second.

The second match was quite comfortable for The Blues as they defeated Indian Air Force with a dominating 4-0 scoreline. Roy Krishna opened the scoring in the ninth minute of the match while Sunil Chhetri got the second in the 23rd. Faisal Ali scored the third one in the 71st minute, while young striker Siva Sakthi got the fourth in the third minute of stoppage time.

The third match for Bengaluru however ended in a draw with a 2-2 score against FC Goa. Sunil Chhetri again was the target man for them but this time his efforts were not enough. In the last match against the table toppers Mohammedan they failed to register the win with a disappointing 1-1 score. Sivasakthi Narayanan salvaged the points for the Blues in the important fixture. It was enough for them to qualify for the quarter-finals.

Quarterfinals held the most dramatic test for Simon Grayson’s boys as they defeated a spirited Odisha FC 2-1 to advance through to the semis. A goal with the last touch of the game by Roy Krishna and a strike from N. Sivasakthi- his fourth of the tournament, saw Bengaluru FC (BFC) pull off a 2-1 victory over a 10-man Odisha FC in the second quarter-final. The last hurdle before the final for BFC was Hyderabad FC. An own goal at the half-hour mark by Spanish defender Odei Onaindia Zabala was enough for Bengaluru FC to overcome the challenge of Indian Super League champions Hyderabad FC and make the final of the 131st IndianOil Durand Cup.

Mumbai was set up in Group B along with two Kolkata giants ATK Mohun Bagan and East Bengal. Rajasthan United and Indian Navy were the other two teams. It was a very very difficult task for Buckingham’s boys. But they sailed past Indian Navy 4-1 in the first Group B game. The Navy side took the lead through a fantastic Adersh Mattummal pile-driver in the 42nd minute, but the Islanders equalized just before the first-half whistle through Vikram Pratap Singh. Scotsman Greg Stewart put the Islanders ahead through a penalty in the 65th minute before Chhangte’s brace stamped their superiority.

They faced ATK Mohun Bagan in their second encounter which ended in a 1-1 draw. Liston Colaco drew first blood for the green and maroons in the first half, only to see that effort cancelled out by Argentine striker Jorge Pereyra Diaz, in the second. In the third match, Mumbai City FC unleashed a champagne performance with a 5-1 win over Rajasthan United FC, thus qualifying for the knockouts. The last match of the group stage however ended in a defeat against East Bengal as they lost to the Kolkata giants 4-3. But it was enough for them to finish as table toppers with 7 points.

A quarter-final was an eight-goal thriller. The match saw Mumbai City reach the semi-finals of Durand Cup 2022 thanks to a Greg Stewart hat-trick and pair of goals from Lallianzuala Chhangte. Croatian striker Petar Sliskovic, Jockson Dhas, and Rahim Ali scored for Chennaiyin. Mumbai faced one of the most dominating teams of the tournament Mohammedan in their semifinal encounter. Bipin Singh got the all-important strike in the final minute of regulation time, hence taking the team to the much-awaited final.

The two sides have met nine times, with Mumbai City FC winning on five occasions. Bengaluru has registered three wins. The Islanders have won four of the last five Hero ISL encounters between the two teams. Mumbai City FC defeated Bengaluru 3-1 in their last encounter in the previous season.

It will interesting battle to see which team comes out as the winner and start their season with silverware.