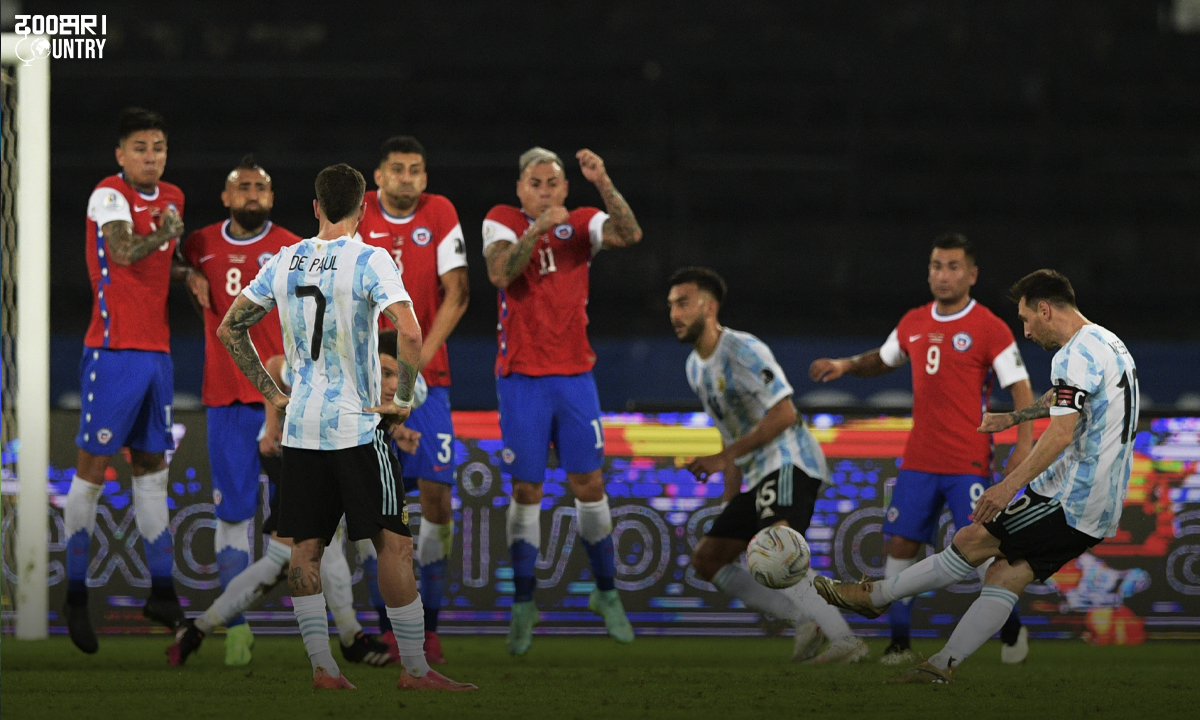 Argentina kickstarted their Copa America 2021 campaign with a 1-1 draw against neighbors Chile in Rio de Janeiro tonight. Eduardo Vargas headed home a rebound off a saved spot-kick to cancel out Lionel Messi’s brilliant free-kick in an otherwise physical battle. Football Monk comes up with the five talking points from the match.

Chile started off on an aggressive note, keeping possession and chasing down every loose ball. However, the telling chances in the opening quarter fell to Argentina, with Lautaro Martinez blasting high off a Lo Celso cross. Moments later, Nicolas Gonzalez saw a one-on-one effort saved by Claudio Bravo. Lo Celso was at the thick of things again, creating all of the openings.

A brief period of proper midfield battle ensued with rash tackles flying here and there. Lo Celso was rewarded for his mazy runs down the middle when he was taken out by Erick Pulgar in front of the box. The writing was on the wall for Chile as Messi stood over the ball from a dangerous position. The Argentine maestro placed it perfectly over the wall and out of Bravo’s reach to grab the half-time lead.

Chile’s composed start in second half

La Roja began the second half, playing with purpose and keeping hold of the ball. Jean Meneses continued to trouble the Argentine defense with his pace down the left flank. However, the breakthrough came once Erick Pulgar released Vargas down the middle, splitting the Argentine defense. Vargas’ first-time shot was saved but Vidal was taken down by Tagliafico while latching onto the loose ball. The referee awarded a penalty after consultation with VAR. Vidal saw his attempt from the spot saved brilliantly by Martinez but Vargas headed home the rebound off the crossbar. This was Vargas’ 13th goal in Copa America, just one adrift of Paolo Guerrero.

Argentine left-winger Nico Gonzalez spurned a series of glorious chances throughout the match. After drawing a fine save off Bravo in the first quarter, he failed to convert from close range from a Lo Celso pass. Gonzalez’s night went from bad to worse as he couldn’t keep a free header down on target from yards out as Messi picked him out unmarked with a perfectly-lofted pass.

A tale of two set-pieces, foul plays and a stalemate

As many as 33 fouls were committed throughout the match as five yellow cards were brandished by referee Wilmar Roldan. The second half saw a cagey affair with the ball frequently changing ownership in the middle of the park. The two conversions from set-piece situations reflect the story of missed chances and fouls throughout the match. The stalemate suits both teams in their quest to reach the knockouts of the competition.