Bino George: “My dream is to bring 90s Kerala football back” after Santosh Trophy win 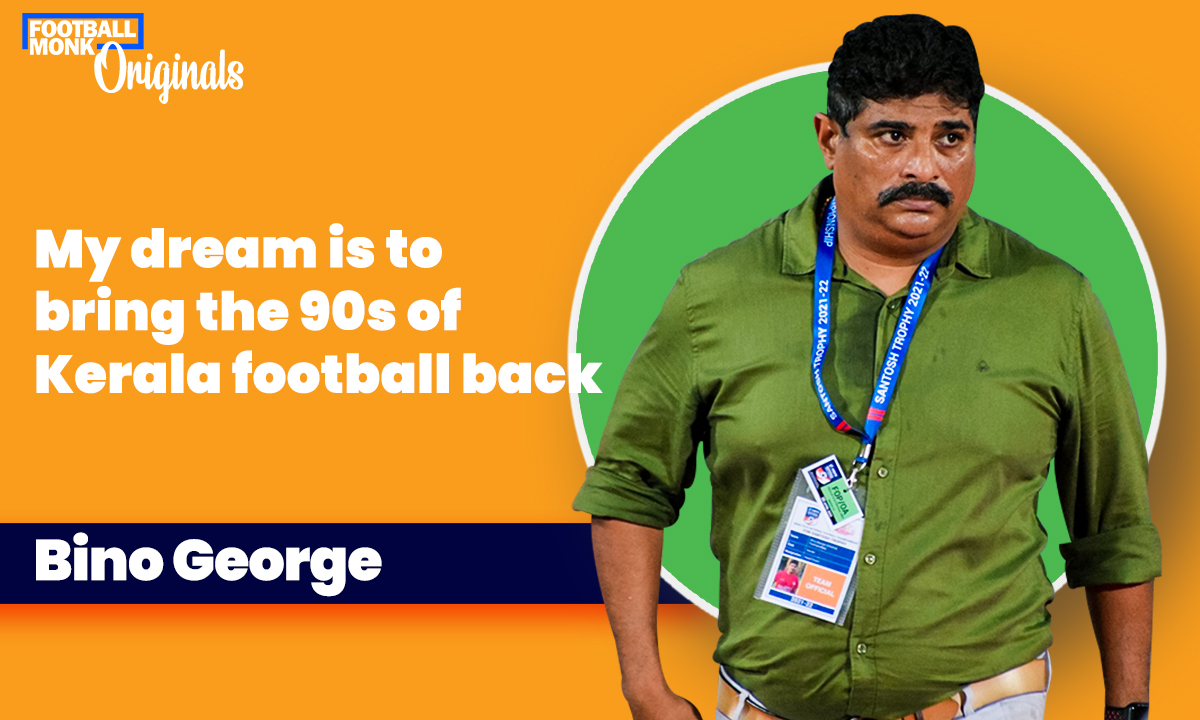 Kerala on Monday won the 75th Santosh Trophy after beating Bengal 5-4 in the penalties. The Bino George managed side came out to be the deserving champions after showcasing a brilliant style of play and utter dominance all through the tournament.

After the emphatic victory, Kerala Head Coach spoke up close and personal with Football Monk as he depicted Kerala’s story to success.

The Kerala side maintained an unbeaten run in the whole campaign with just one draw on the group stage. The final match went to the extratime after both sides failed to break the deadlock.

Going in to the extratime Bengal took the early lead but thereafter Kerala found the equalizer at the edge of the extra time. Sharing his thought during these nervy minutes the gaffer said, “I never lost faith in my boys. Throughout the match, we created a bundle of opportunities. And I knew sooner or later we were going to convert them.”

Quizzed about his expectations from the finals Bino said, “Obviously, I expected it to be a tough match. We had already beaten Bengal once in the group stage. So, they knew our plans. They knew that our midfield is our strength.”

Bino also appreciated the Bengal coach as he opines , “They planned very well to counter us and shut our midfield down in the first half and made me go back to the drawing boards. I changed my plans in the second half, we used the width of the pitch and started creating clear-cut opportunities.”

Fans made it possible

Bino believes its their fans who helped them overcome all odds in the tournament. He also belives it s the fans who motivated them to make a comeback in the finals as he says, “The fans came in numbers and they cheered us with all heart. So we couldn’t let them go empty-handed before the Eid.“

“I spoke to my boys that this is the time when they will have to prove their mettle and they responded in a brilliant way. As a result, we could gift the fans some joy.”

Bino was seen crying after the final whistle asked about this emotional outburst he said, “I was really happy and got emotional. The hard work we put in while coming to the tournament was immense. Whatever, we did in the training ground, they replicated that on the field.”

“So when we won the silverware I really enjoyed the moment and those were tears of my happiness,” he added.

Kerala football is on the rise

Bino George believes “Kerala football is on the rise”. “We brought the Santosh Trophy back to Kerala. Kerala Blasters are doing very well in ISL. Gokulam Kerala is dominating the I-League and Indian Women’s League“, he said while speaking on the recent heights achieved by Kerala football.

While quizzed the reason for this success, George opines, “KFA is working really well. They started the Men’s and Women’s League and encouraged clubs to work on the grassroots. As a result, we are seeing more talents rising and are proving themselves on the national stage”.

“Now my dream is to bring the 90s of Kerala football back. The days when IM Vijayan, VP Sathiyan and Pappachan used to dominate the Indian football circuit” said Bino while sharing his plans next.

Kerala is the future

The coach confirmed, “Multiple players have been approached by ISL and I-League.”

Asked about the possibility of a new club from Kerala in the ISL, Bino said, “I hope to see Gokulam joining ISL. For sure there will be a new vibrant rivalry created. And I think this will happen soon.”