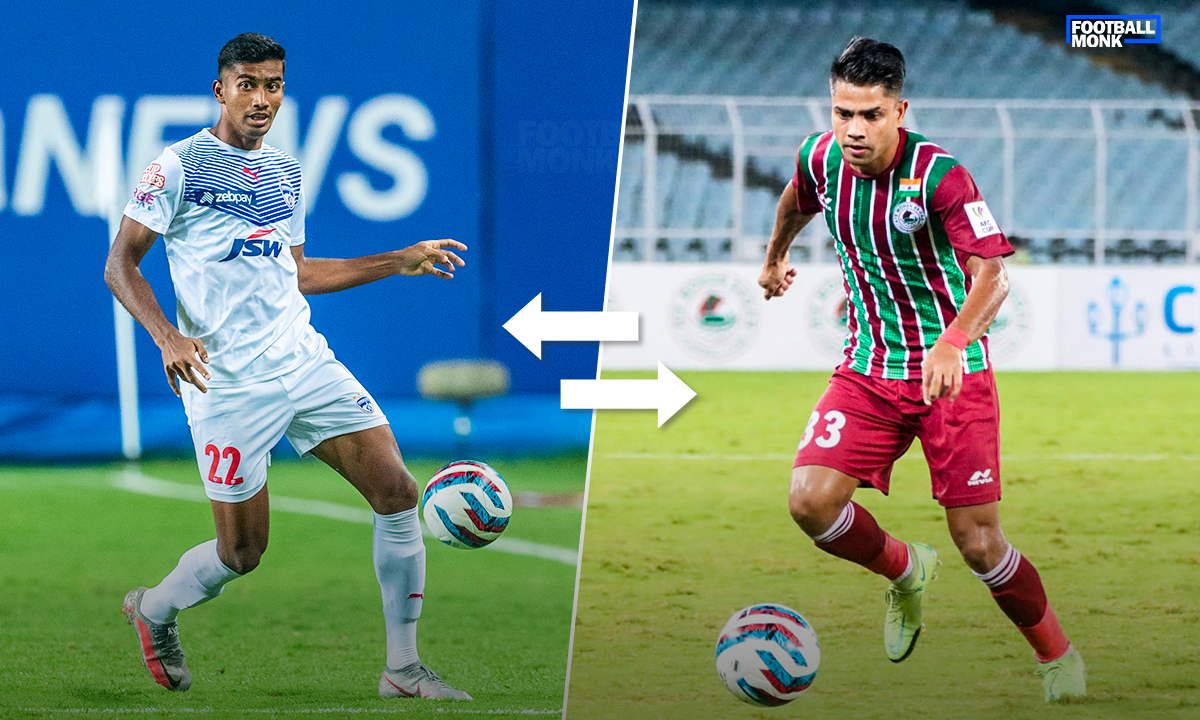 Bengaluru FC winger Ashique Kuruniyan has agreed to join India Super League side ATK Mohun Bagan on a swap deal from Bengaluru FC Football Monk can exclusively confirm. As a part of the swap deal, Prabir Das will join Bengaluru FC in the upcoming summer window.

Ashique’s current contract runs till 31st May 2023. But the Mariners have penned him on a 3+1 deal keeping him at the club till 2026. Bagan has already reached out to an agreement with Bengaluru FC which will see Prabir Das joining the blues on a multi-year deal in the upcoming summer window.

“Bagan has agreed for a swap deal which will see Prabir join Bangalore and Ashique joining ATK Mohun Bagan in the coming window,” a source keeping a track of the development confirmed.

ATK Mohun Bagan showed interest in the Indian National team and Bengaluru FC winger in late April and were looking at all options available for the move.

On the other hand, Bengaluru has been quite interested in Prabir since the last season and tried to sign him during the summer window. But that eventually didn’t turn fruitful as Bagan denied to release their player.

Buth things turned favourable this season as both sides have cracked a deal that serves everyone’s requirement.

Prabir Das has been one of the most successful players in the Indian Super League. He joined ATK in 2016 and played a crucial role in the Kolkata side ISL triumph. Thereafter he has been a constant at the Kolkata side for the last four seasons.

During 2019-20 Prabir arguably had his best season under Antonio Lopez Habas. When he made a comeback after recovering from a critical surgery.

He came up with a terrific performance along the flanks creating a plethora of chances upfront. Even his partnership with Roy Krishna was the contemporary talk of the town.

At ATK Mohun Bagan Prabir couldn’t show up with his best. In the initial half of the last season, Das struggled to grab game time and failed to make a mark.

But after Juan Ferrando’s arrival, things started changing for Prabir as he slowly got back to form. He made frequent starts and seemed quite promising in the latter half of the season.

In the recently concluded AFC Cup matches Prabri seemed quite in a shape and back in form as he made a mark whenever given chance.

Ashique started his career in Pune. Following his exploits in the academy, it was announced that Kuruniyan would join Villareal-C on loan from FC Pune City. However, he returned to India after suffering a hamstring injury after three months.

Later that season, Kerala born forward signed a professional contract with the senior team. In his first season, he played a total of 10 matches, 9 in the league and 1 in the super cup. He scored 1 goal and set up one assist in the league.

The following season saw Ashique’s game time increase drastically. He featured in 17 games, scoring twice and setting up 3 assists. However, that was not enough to help his team qualify for the playoffs.

Ashique moved to Bengaluru FC in the summer of 2019. There, he had a brilliant first season, qualifying for the semifinals once again. But, Carles Quadrat mostly deployed him either as a left-back or in the left midfield, significantly reducing his attacking contributions. His most notable contribution came in the semifinal away leg where he scored the first goal. However, ATK FC managed to script an impressive comeback in the game.

The Keralite player missed a major part of the 2020-21 season owing to his fracture.  Last season Ashique made 13 appearances for the blues and made a satisfactory performance amidst the forgettable BFC season.

Good targets for both teams

Bengaluru FC last season has a campaign to forget. As they failed to qualify for the playoffs for the second consecutive time. And reports suggest the Blues are not interested to extend the stay of their talisman Marco Pezzauli.

Thus it is quite clear that Bengaluru FC is eyeing an overhaul in their quest to revamp their lost glory. Thus penning in an experienced campaigner like Prabir Das on a multi-year contract will surely bolster their goal.

On the other hand, ATK Mohun Bagan is on the hunt for versatile players who can play anywhere in the wings. Ashique has the experience of playing in the attack, midfield as well as defence thus he fits in perfectly in this criteria. Juan Ferrando’s men have fallen short on many occasions and maybe the Bagan think tank believes Ashique will be the man to solve the puzzle.