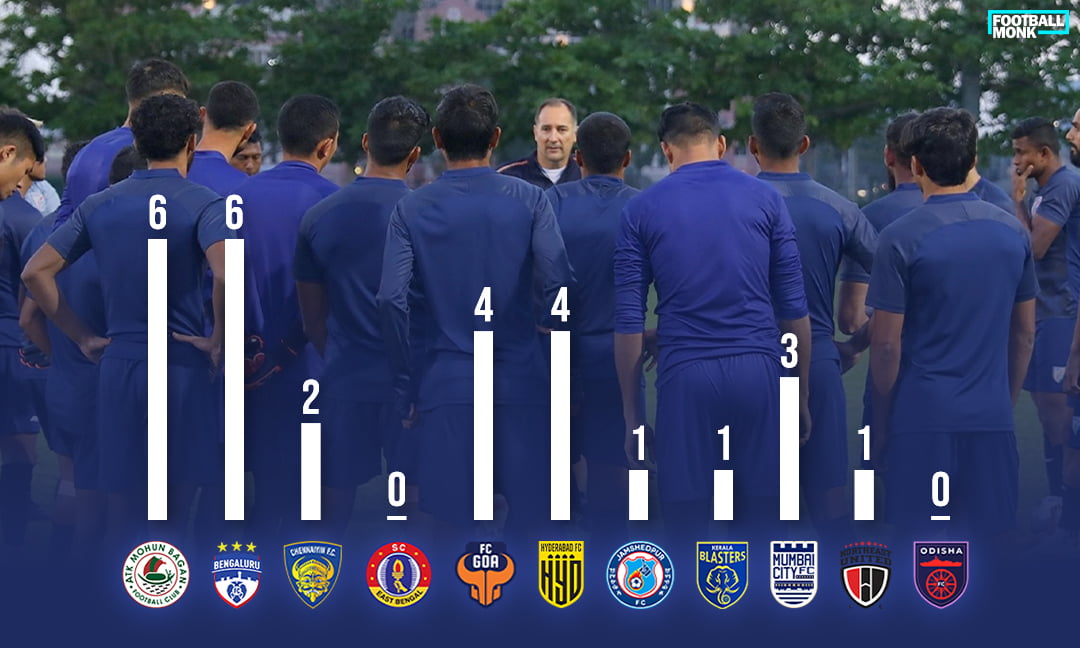 The Indian football team has landed in Qatar to take part in their remaining FIFA World Cup Qualifiers fixtures which will be held at a centralized venue in Doha. A 28-man squad has been called up for national team duty by Igor Stimac.

India has already crashed out of the World Cup, but will be looking to finish third to obtain a berth in the third round of the AFC Asian Cup. The Blue Tigers will be playing against Asian Champions Qatar on June 3, Bangladesh on June 7, and Afghanistan on June 15.

Today, Football Monk takes a look at the club-wise distribution of the latest team squad.

Despite a season to forget for Bengaluru FC, Igor Stimac has taken into confidence six of the Blues’ stars as they form the ‘core’ of the national team. Sunil Chhetri returns to the squad after recovering from COVID-19. Meanwhile, Gurpreet Singh Sandhu is undoubtedly India’s best and most proficient man between the sticks and his name on the squad list was very much expected.

Suresh Singh Wangjam was one of the few positives for the former champions and his performance in the two international friendlies was good enough to earn him a place. Udanta Singh too returns to the squad to add some experience on the wings alongside Ashique Kuruniyan. Lastly, Rahul Bheke has also been called up to add more strength to the backline following an injury post the season.

The Mariners finished runners-up in the ISL last season and the prime reason for their run to the final was the form of their Indian contingent. Pritam Kotal, Sandesh Jhingan, and Subhasish Bose had a prominent role to play in their backline which conceded the least number of goals throughout the season.

Pronay Halder’s inclusion will also bring some experience and maturity to the field while Manvir Singh was an easy pick given the kind of form he has been carrying forward ever since joining the Mariners. Their latest rookie Liston Colaco also made it to the squad list following his great individual season with his former employers, Hyderabad FC.

The Nizams had a great season under Manolo Marquez who made a young, inexperienced squad believe in themselves. The Spaniard nurtured a lot of talents for Hyderabad FC and a few of them made it to the national team. Akash Mishra was on fire on the left side of the pitch not just for Hyderabad but also for the Blue Tigers when he made his national debut back in March.

Mohammad Yasir also joins the list of those young talents who were handed a national team debut by Igor Stimac back in March and he did well, which is why he has been called up again. Chinglensana Singh has been solid throughout the season and will be a good option for the coach to consider at centre-back. In addition, Adil Khan had an enormous loan spell with FC Goa and was outstanding for the Gaurs in the Champions League against some of the best in business and was called up for his promising form.

The Gaurs became the first side to represent India at Asia’s premier club competition, the AFC Champions League, and made the whole country proud. They were good enough to manage a few points against the big boys of Asian football following a relatively successful ISL campaign. Dheeraj Singh Moirangthem made a switch to the Goan side after not being able to get play-time with ATKMB and what a move it turned out to be! He was one of the standout performers not just for FC Goa, but also in Group E.

Glan Martins was rewarded with his maiden national team call-up for his wonders in the middle of the park for FC Goa. Moreover, Brandon Fernandes proved it yet again why he is one of the top quality midfielders in the country with his top-notch performances in the ACL. Ishan Pandita also joins the list following his heroics upfront in the ISL.

The City Football Group-owned outfit had a dream season as they won the domestic double courtesy of some mind-blowing displays from their Indian unit. Amrinder Singh helped the Islanders maintain the second-best defensive record throughout the competition and is a highly-rated and in-form goalkeeper.

Rowllin Borges is India’s midfield marshal and that is why his presence in the squad is always a plus point for the Blue Tigers. Bipin Singh showcased his goalscoring instincts which included the only hat-trick of season 2020-21 and that was more than enough to convince Igor Stimac.

The Marina Machans didn’t have a very good season but their outstanding performers and team India regulars Anirudh Thapa and Lallianzuala Chhangte have been called up for national duty considering their vast potential.

NorthEast United played their A-game under Khalid Jamil last season and finished third on the table. Lalengmawia aka Apuia was not just one of the top performers for the Highlanders, but also in the ISL. His calmness and maturity with the ball earned him the Emerging Player of the Season award alongside a few more accolades. Apuia was also one of the standout performers for the national team in the international friendlies back in March.

Kerala Blasters’ Sahal Abdul Samad was called to fly with the national team to Qatar because of the creativity and magic he brings to the table. Sahal missed out on the international friendlies with Oman and the UAE owing to an injury and will be hoping to make an impact if given a chance.

The Men of Steel had a topsy-turvy season under Owen Coyle and from their side, Narender Gahlot has been called up to don the blue jersey. Gahlot is one of those young players who were handed a national team debut by Igor Stimac, he also became the first 21st century born goalscorer for the national team back in 2019 when he scored a header against Syria.