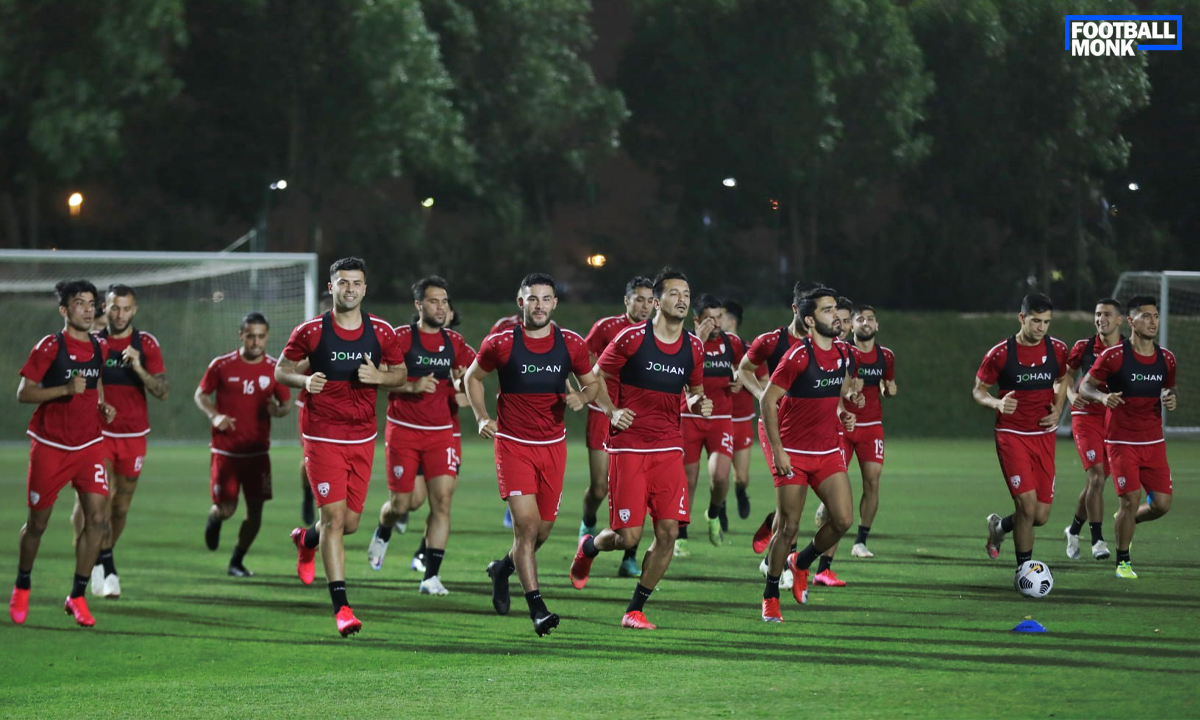 India starts their quest for the AFC Asian Cup later next week on 8th June 2022 at the prestigious Salt Lake Stadium in Kolkata. The Blue Tigers are seeded with Afghanistan, Cambodia, and Hong Kong in the Group D of the Asian Cup Qualifiers. Ahead of the mouth-watering clashes, Football Monk takes a look at the opponents India will be facing, this time, Afghanistan.

The Afghanistan national football team, nicknamed The Lions of Khorasan, was founded in 1922. However, they played their first international game against Iran in Kabul in 1941, although unofficial. Their first official international fixture came seven years after, against Luxembourg. The Afghanistan Football Federation was one of the founding members of the Asian Football Confederation in 1954. One of the biggest achievements of the Afghan national team came in 2013 when they won SAFF Championship and earned “The FIFA Fair Play Award”.

Anoush Dastgir, the current manager of the Afghanistan national football team, will be looking to upset the hosts in Salt Lake Stadium. His playing style is not much different from India but they try to impose their dominance on midfield with pressure and they often rely on a very physical approach to the game.

Afghanistan is currently ranked 150th in the FIFA Rankings. The highest ever ranking they ever achieved was 122, in April 2014.

Afghanistan has fairly been active in recent days. They first played against Saigon FC in Vietnam in an unofficial friendly. The match ended 0-1 in favour of the Ho Chi Minh City-based club. Following the unofficial match, they played against the Vietnam national team. The Afghans lost that match as well, this time by a 0-2 margin.

Afghanistan’s last win in an official seniors match came last year in November when they defeated Indonesia by a solitary goal.

Head to head with India

India holds a positive record against Afghans. In ten fixtures, the Blue Tigers have enjoyed 6 wins, and 3 draws and were defeated only once. India’s first victory against Afghanistan came in Asian Games with a convincing 3-0 scoreline. The last two encounters between the nations have both ended in a 1-1 draw. Both the mentioned games were a part of the Fifa World Cup 2022 and Asian Cup 2023 joint Qualifiers campaign. Afghanistan’s only win against India came in 2013 in SAFF Championship when they edged past India by a 2-0 margin.

Players to watch out in the AFC Asian Cup

Sharif Khamayuni Mukhammad is the captain and plays an integral part in the team. In November 2020, Sharif signed for Indian club Gokulam Kerala FC in the I-League. He also won back to back I-league championships with the Malabarians. Sharif got the experience against Indians in his bag and will be ready to exploit it in the AFC Asian Cup qualifiers.

Faysal Shayesteh has been omnipresent in the Afghani midfield since 2014. He is undoubtedly one of the first names on the teamsheet. The attacking midfielder has made 47 appearances so far for the Afghans and has scored 9 times. In spite of being a midfielder, he is the joint-highest goalscorer for Afghanistan. Faysal will surely be looking to add more to his illustrious career.

Zohib Amiri is the longest-serving player in Afghan football history. The 32-year old made his debut in 2005 and is still going strong. Amiri has vast experience in playing in India as well, having played for numerous clubs like Mumbai FC, DSK Shivajians, Dempo, FC Goa, Chennai City, and Gokulam Kerala. Moreover, he is currently under contract with Real Kashmir. Thus, with more than 10 years of Indian experience under his belt, Zohib will definitely be the man to watch out for against the Afghans.